I've started doing some more intense sales analysis for the booth, and thought it would be a good thing to share here.

Last year, my sales tanked in January and February.  I still made my booth rent and cleared a little over that, but not much.  Those were my lowest checks.  So I was a little apprehensive coming into this year, especially after the strong, strong December that I had.

Well, surprise, surprise!  My January sales equaled my December sales, almost to the penny.  In December, sales moved pretty consistently through the month.  In January, however, I was more dependent on a couple of high weekends to keep things moving.  In fact, sales fluctuated wildly--from nearly 100 dollars over a weekend to less than five a day sometimes during the week.  Oddly enough, none of it seemed to be tied to the weather, either.  I had really good days on some of the snowiest, coldest days of the month.

I've reworked my Excel worksheets a bit to allow me to do some sales analysis each month.  I'll do a summary here on the blog as well.  I'm trying to move from just taking things as they coming to taking a more proactive stance--planning, anticipating and trying to be prepared.

I used to think that being prepared just meant remembering the kinds of things that sold well or sold quickly so that I could get more of them.  But I'm coming to realize that it has a lot to do with knowing when sales happen as well.  I'm looking to grow the booth to a new level this year, which requires new thinking.  At some time, I may want to take a class on this stuff, who knows?  Just imagine...me...a business planner??

Anyway, here are a couple of tidbits from the January worksheet:

First, a look at the days by the numbers: 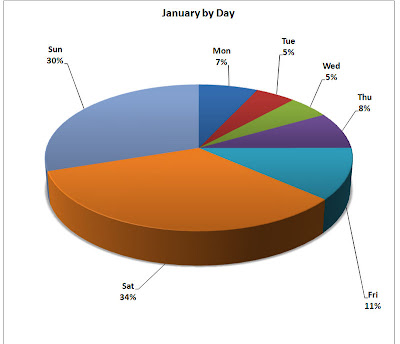 This is just a break down showing what percentage of sales came from which day of the week.  As expected, the weekends provide the bulk of the sales for the month.  Not surprising, since those are big shopping days.  What did surprise me was how large a chunk it actually is.  Including Fridays, weekends are 75% of the sales for January!  It think that's because I had some abnormally large sale weekend sale days in January, but I'm going to keep an eye on it.
Also surprising was the percentage of sales on Mondays.  I had always thought of Mondays as my slow days, but here the Monday percentage is actually higher than Tuesday and Wednesday!  I'll be watching that too, to see if this is a reliable pattern or an aberration.
And now, the numbers by the days:

This is a break down of the sales targets I hit every day.  I figured out based on December's sales (again my highest for the year), that I really want to try and maintain at least a 25 dollar daily sales average.  That number in itself surprised me.  It's lower than I had thought it would be, plus I had also thought I was already regularly hitting that.  Obviously, I wasn't!  Hence, the need for more serious thought in these areas.  So, anyway, that is may target goal for this year:  to maintain a 25 dollar daily average in sales.

Based on that, I decided to start tracking and see how many days I am at or over that average and how many I am below it.  January was again surprising when I saw that I had exceeded that target on 9 days.  I tend to lament and focus on the low days,  I need to work on remembering the high days a little better.  I also need to work on bringing that "less than 5" number down and converting some of the "between 10 and 20" days to something higher.  But, overall, I'm pretty happy with what I found.  It' a good foundation to grow on, anyway.  The actual daily sales average for February was 24.97.  So I was pretty much on target!

Email ThisBlogThis!Share to TwitterShare to FacebookShare to Pinterest
Labels: eddie needs to learn to crop his pics better, the booth, the numbers

This was very interesting! I've never really done any analytics, but you inspired me to at least quickly calculate my average daily take. I've not paid much attention to days of the week, since (unsurprisingly) weekends are the winners. I sometimes feel (at least at an antique store), that we're completely beholden not only to who happens to come in, but on the shop. I sure wish our owners would change out the windows more often and make it less stodgy!

Thanks for the comment, Sue. Glad I've made you think a little. A less stodgy antique store? I thought we loved antiques places because they're stodgy! :)

Seriously, I know what you mean about the level of influence the store as a whole has on things. The tone the store itself sets in shopper's minds is important.

Maybe you should ask if you could have one of the windows to do the displays for a few months? That could also promote your booths!

The spreadsheets and statistics are impressive! I use a very simple one to keep track of my booth inventory and sales, etc. but mine are not as sophisticated. :)

I think it's a wonderful idea to make your business and your booth the best it can be. I am constantly rearranging and redoing mine. I've even had fellow vendor comment "Oh, you're changing it again?" Um. . . yes! My thought is that even though you have the same merchandise, if it's arranged and presented in a new way it appears fresh and new!

Thanks, Jackie! I appreciate the feedback and the compliments. I'm just a big ole nerd-child when it comes to Excel. I love to fiddle with it and make it do new things. :)