Okay, when I said "tomorrow," I really meant "the day after tomorrow."

But of course you knew that, right?

Anyway, here is the new booth space in all its glory.  The day I expanded into the extra space, I meant to take my camera and do lots of "before", "after", and "process" shots, but I totally forgot it!  Sometimes it's pathetic that I'm such a lousy blogger.

Anyway, here's the "after" shot.  I'll try to talk you through the changes. 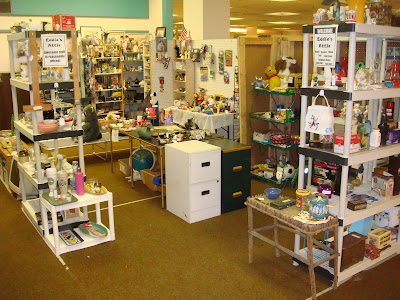 If you can see that tape line running through the middle of the booth, that used to be where the wall of my booth was.  Mine was the nearer space and the one I moved into was the farther space.  I love the way dropping the wall opened the space up so much.  That whole end of the mall feels different without it!  (Plus, it removed a hidey hole for would be shoplifters.  That's always a good thing.)
The booth ends at the big raccoon sitting on the cot.  Moving my white wall over and down where it is now made more of the peg board available and usable, since the wall isn't being used primarily as a border any more.
I love having those two card tables in the middle as an island.  I never had room before and it gives me a lot of space for smalls.  Some small items get lost on a shelf, but are more distinct and obvious on a table.
Finally, you actually have to imagine the picture without the green and white file cabinets or the cot, since they've sold already.
And here are some bonus shots.  First, my religion wall, which is right across from my booth.  There's a little bit too much on it at the moment, but I kind of dumped a lot of stuff that I needed to get out of my stockpile in there.  It's been selling pretty briskly, so it should be thinned out some in a few weeks.  I'm planning on bringing in some nails and a hammer and hanging the crucifixes on the wall.  That would provide more display and uncrowd the shelves a little. 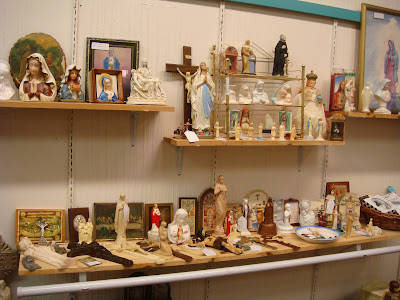 And finally, my book and media space, which needs some work.  I've got some plans for a revamp over the spring/summer, but it's going to be a work in progress for a while.  On the other side of the back wall is my big booth, so I want to find a way to connect the two spaces and get some flow going.  I think I want to move some bookshelves from home to use for display.  They are not as long as the walls, so it will open a gap between the booths.  The extra shelves on the sets at home will make up for the loss of size from the wall.  However, before I can do that, I need to come up with something to do with the walls.  I won't really need them at that point, so I'm thinking I'll sell them, even though it will take a while to get them sold. 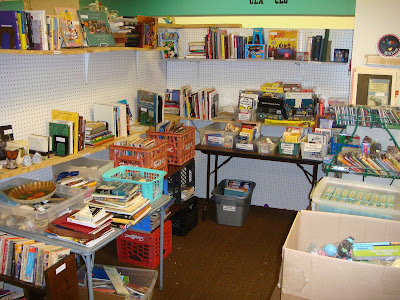 Email ThisBlogThis!Share to TwitterShare to FacebookShare to Pinterest
Labels: expansion, pictures, the booth