The Adventures of Nigel and Sixtus

I've picked up two new friends in recent days, so I thought it was about time to introduce them.  They've been hanging around a lot and are having quite a bit of impact on my day to day life.  Let's start with a photo, shall we? 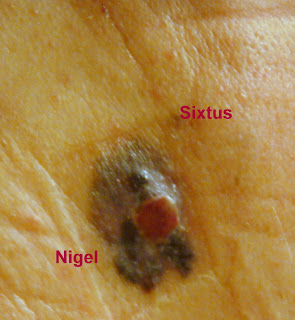 That multi-colored blotchy thing is called Nigel.  I'm not sure if you can make him out or not, but next to him is a kind of lumpy spot.  His name is Sixtus.  They live on the right side of my neck.  Well, Nigel lives on my neck.  Sixtus is more like inside my neck.  The consensus is that he's made himself comfy on my right parotid gland.  He might be related to Nigel, but we aren't sure about that.  Nigel, you see, is a malignant melanoma.  The red spot is because he bleeds from time to time.  Sometimes a little.  Sometimes a lot.

I'm not saying this out of false modesty or denial or anything else.  I know what melanoma is and what it can do, but I feel like just about everyone that knows about it wants to shove me in some kind of a convenient box that I really don't want to be in right now.  I think there are other people hurting and tired and sick and worried from this disease or other medical situations, and they are the ones that need attention and concern.  Not me.  They're the ones who need it and deserve it.  I'm just trying to live my life and deal with this thing until it comes off.  It's an annoyance and an inconvenience to me, but nothing near the level other people are dealing with.

The coming off of Nigel and the coming out of Sixtus (always knew he was gay) is scheduled for December 31.  Happy New Year to me.  We won't know for sure how much stuff will be removed with Sixtus until they get in there.  The whole parotid may have to come out.  Lord, I hope not.  I'm also not sure how they are going to replace the skin they remove with Nigel.  I fear having bits of my buttocks attached to my neck.  Around the house, I'm already referring to myself as a "buttneck."

They've been on the scene a while now, but I have held off on writing about them until now, because I really didn't feel like drawing attention to something that is going to be gone soon.  However, they have been really asserting themselves into my life more and more lately and it's getting on my nerves.  I needed to start getting this off my chest (and neck).  There's more to their story, but I've said enough for right now.  I'll continue later.
Posted by EM at 12/05/2012 07:43:00 AM

Email ThisBlogThis!Share to TwitterShare to FacebookShare to Pinterest
Labels: adventures with melanoma, Don't wanna be a buttneck, Nigel and Sixtus

Eddie! -good vibes, prayers, whatever you're comfortable with.