I didn't have time yesterday to get the booth pics sorted and edited, so I decided to wait a day to show you the fully "Halloweened" set up.  There were also a few shots that I did not get on Sunday, so I took them yesterday when I went by the booth.

Everything starts with pulling all the Halloween merch out of the shed.  This stash includes a few left-overs from last year, plus some yard sale finds, and all the items I bought at clearance sales last year.  This year, it came to six tubs and four bags.  This also includes fall-themed decor and Thanksgiving-related items.

Shots of the mostly finished table.  I've used those tablecloths for the past three years.  The one with pumpkins keeps bunching up in places.  I keep smoothing it out, but it's kind of a never-ending battle.  I didn't notice the problem until I had almost everything out and on the table and I really didn't want to pull it all off again.

It's important to label everything really well when you put it in storage, since it's going to be there for nearly a year before you put it out.  I label the outside of all my containers.  I also indicate whether the items are new or secondhand and if they have been at the booth previously on the label.  As you can see, this label was on a bag of bags of bones.

I usually make at least one shelf of Halloween stuff on my shelving that holds my "new to the booth" items.  This is usually the secondhand stuff.  That way, I can grab people as they walk down the aisle, even if they don't go into the booth and visit the table.

To make the Halloween table work, I had to set up a new area for my comics.  They normally go on the table that's now the Halloween table and will later be the Xmas table.  If it were other items, I probably would have just boxed them up, but I can't afford to be without my comics sales until after the first of the year.

Is it legal to include two Amish dolls in with the pilgrims and such in your Thanksgiving display? 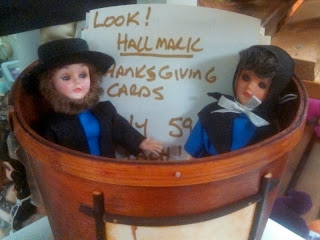 This is the whole Fall/Thanksgiving display.  I don't do a lot of this compared to the Halloween, but I do think it's a nice touch to have.

Not all of the Halloween stuff would fit on the table.

So far so good.  When I went back today, several things had already sold.  In fact, I had a really good sales day for a Monday.  I also have about twenty dollars in sales coming from the management there.  They'll hold their items until payday, but they're good for it.  I usually sell several Halloween items to them every year.

Email ThisBlogThis!Share to TwitterShare to FacebookShare to Pinterest
Labels: halloween, photos, the booth, things that are creepy