I haven't mentioned in a while how much I appreciate the folks who comment here on the blog.  The experiences you all share really add to the posts, as well as your different perspectives and the points you add to whatever I originally wrote.  Thanks so much for being part of this blog.  It makes sitting down and throwing thoughts around in the ether worthwhile.  You're not just a part of my blog, you're a part of my life and I'm glad you are!

Speaking of my life, last week was a bit of a whirlwind, as usual.  Saturday was the fifth anniversary of the Peddlers Mall in its current building.  Since I took my booth there and started my reselling career a week after they opened here, so it was also my fifth anniversary.  So, I had a sale! 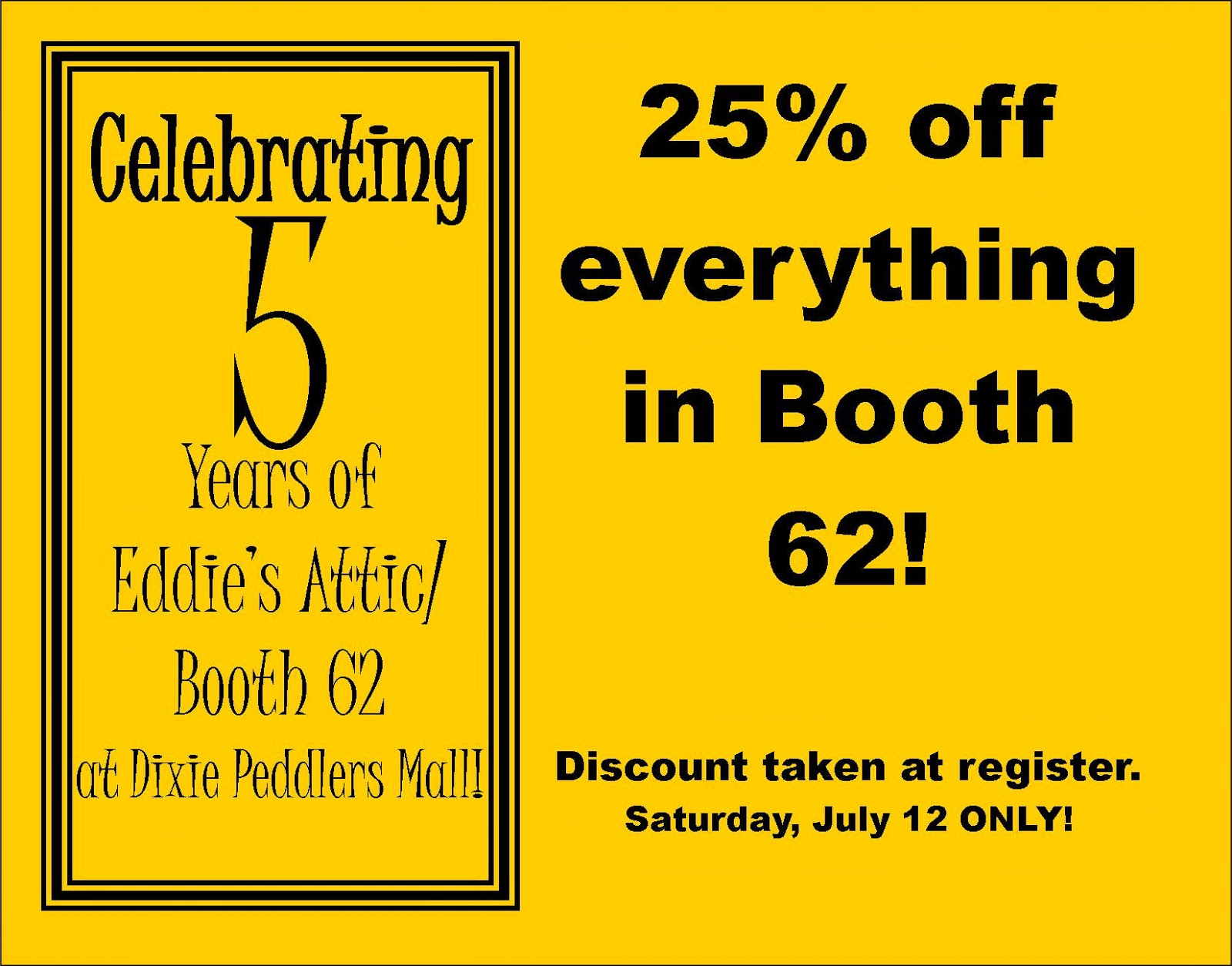 I also set up for the sidewalk sale outside.  While cleaning my booth, I piled up a cart of stuff that had been there for way too long, including (shockingly) a few things that were celebrating their fifth anniversaries!  I took a look at that cart and said to all that stuff:  "No offense you all, but it's time to go, as of now, you all cost 25 cents!"

It's a real kick to look at people's faces when you tell them that everything on the table they're only half-looking at is a quarter.  Without exception, they all stopped and picked up a few things.  Several of them bought bags full.  I wasn't looking for a money maker here, just a booth-cleaner.  I made 25 bucks, but that's a lot of quarters, so that's a lot of things gone!  Happy Eddie!

When I was cleaning off my table, I made a plan for each item left:  what will get donated, what will get given away, etc.  A very few things will hang around, displayed very differently, but not very many.  And their place will be taken by new stuff that I've got coming out next week.  I'm hoping to put out two-three carts full of "new" stuff.

And I've certainly got the room for it, since the sale on the inside was a huge success.  In fact, I was only a few cents under my sales total for the June sale, which was my one day sales record.  If this keeps up, I'm going to get spoiled!  I sold a couple of large items and a whole lot of big bugs and other small items.

Of course, lots of sales mean a lot of work to do.  The booth needs to be rearranged to fill the holes.  The shelves need to be straightened and refilled.  I'm just about out of large stuff, so my yard sale hunting has got to pick up, stat!  Not that there's a problem with that, mind you.  Heh!

I've become a little more active on Facebook recently.  I've always kind of seen FB as more of a nuisance than anything else, but lately I've been reaching out to old friends and family members that I had lost touch with over the years. I guess I'm getting sentimental in my old age or something. FB is actually a pretty decent platform for that.  I've had a Facebook page for years, but finally added a profile pic and some info to it so folks could find me.  If any of you all are on Facebook too, hit me up with a friend request, if you feel like it.  I'll be glad to add you and let you in on my ramblings there.

I'm going to be blogging about some specific recent finds here for the first part of the week.  I know that some of you will be really interested in those.  Days of Our Lives has been hitting an interesting stride of late, so I'll be doing a long, long, overdue "Day by Days" post around Saturday or so.  I know some of you will really not be interested in that, but it's coming anyway.

We're do for some cooler weather this week, which will be nice.  Saturday is that annual trek to the old home town to visit my parents' graves and decorate them a bit.  I'm on my last week of reduced summer hours at work, so I intend to enjoy the extra time, even as I get prepared for the extra work next week which will earn me extra money.

Finally a couple of videos in homage to some of the events of last week.  It was thirty-three years ago last week that a certain all-female band released their debut album and rocked their way into my heart forever:

Also last week, we lost the last surviving founding member of one of the seminal American rock and roll bands.  They influenced hundreds of other musicians, including those ladies playing up there.  Good-bye Tommy Ramone.

And to put the two together:

I was lucky enough to see the Ramones in concert at Iona College in New Rochelle NY back in the early 80's. I was probably wearing my black Candie's jeans with red Capezio's and a skinny leather tie. I remember standing on bleachers so it mush have been in the gym. They were amazing and LOUD! So sad to see them gone. Greatest band ever. The music of the 80's is my favorite. If I had a VCR, I'd play my Live Aid tapes. What a great day that was, 29 years ago yesterday. Whaat?

Mark Evanier tweet:
What does it tell us that there are still plenty of Osmonds around but we're all out of Ramones?

Good weekend at the booth! Yay! I've been so busy trying to edit my dishes and downsize so I can have more room for things I LOVE and let go of those that I just like, even if it's a lot! Hope you have a good week.
hugs,
Linda

That is a lot of quarters! We are doing a Christmas in July sale this week at the flea market. I think I will do my usual 25% off for the weekend and call it GOOD.

Never mind - I found you - forgot I could search for an email address. There are a LOT of Eddie Mitchell's!

I too appreciate those blog comments..always nice to know someone is reading!

Love the Go-Gos...seen them a few times in concert and they never did disappoint!