Some posts are very hard to write.  This is going to be one of those.  We had to put Kosh to sleep yesterday.  My dear, sweet old man is gone. And my heart is broken.  I miss him so, so much.  He was 12 years old, which is old for a cat, but I had been hoping for a few more years with my buddy cat.

We got Kosh when he was a baby.  Keith found him while he was working,  abandoned and alone in an empty apartment.  Later that day, Keith showed up at my office with a cardboard cat carrier and this little head popped out when he opened it.  It was love at first sight. 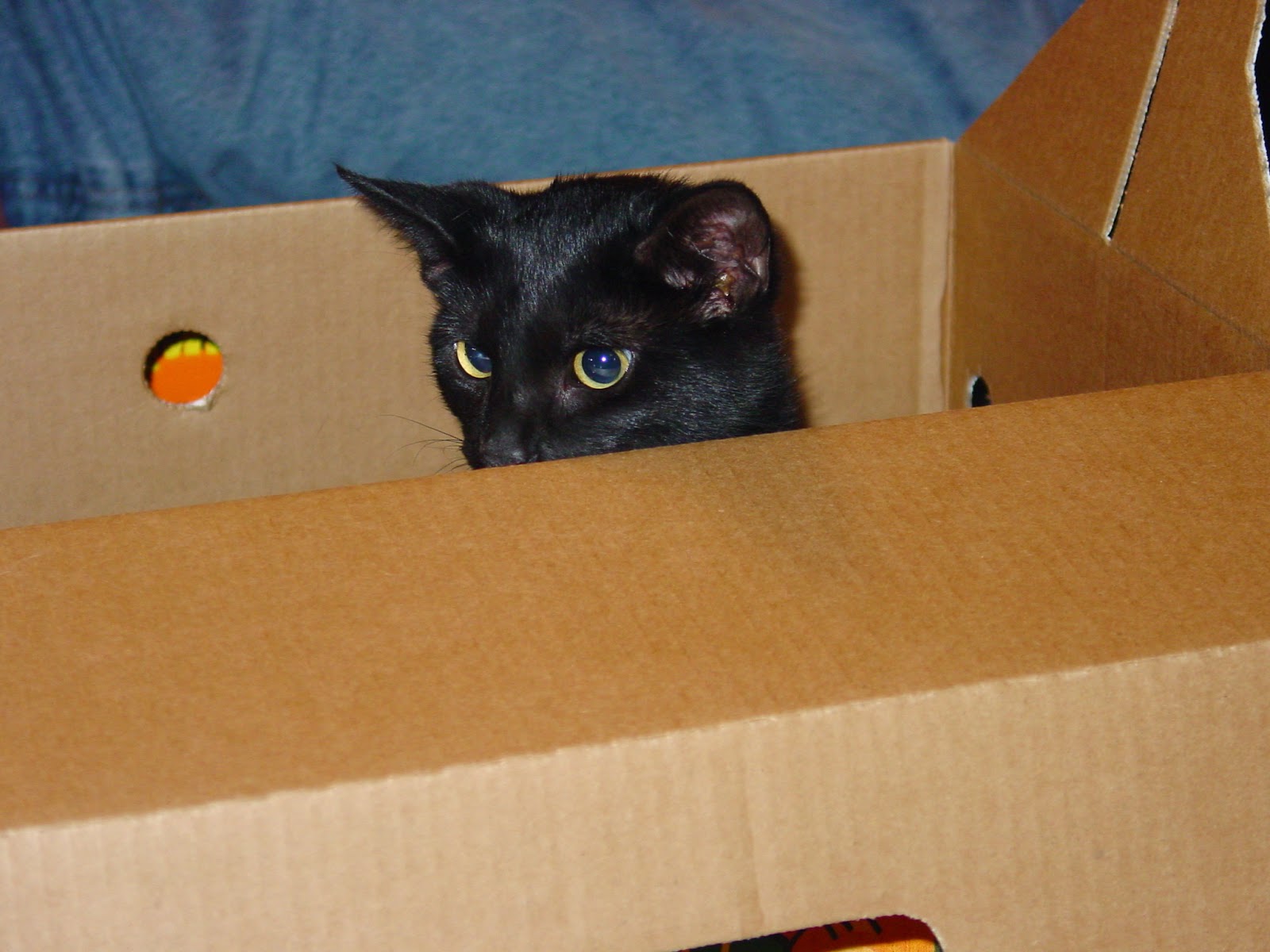 Keith swears he was trying to find another home for the boy, and was just stopping by to say hello.  I know the truth.  He knew I would be unable to resist this little fellow. He was right.

We named him "Kosh" after one of the aliens in Babylon 5.  I was holding him in my lap, and one of the phrases from the show popped into my head:  "We are all Kosh."  So, Kosh he was.  For the longest time, though, we called him "Boy" since he was our only boy kitty at the time.

He had some of the most interesting habits as a baby.  He was all black, except for two white spots on his chest and belly and one little chocolate brown spot that was kind of on his belly and side.  He used to nurse himself on that spot before he went to sleep.  When he got older that place went away, so we always said that he licked the brown right off.

He used to like to crawl up on Keith's chest and take these long kneading walks, with this intent stare.  When he was done with that, he would stop and literally just plop over, trusting that Keith would catch him.  He'd fall asleep like that, and Keith would hold him while he napped.

His appearance did cause some chaos in our social order.  At the time we had two older females, Bennie and Basil.  We had lost sweet, fluffy Brianna several months earlier.  It took some time for the girls to get adjusted to this interloper, but eventually we all gelled into a family unit.

He was only about four when Basil passed.  She had been the head cat, which was a job that he wanted.  He still had a lot of kitten in him at that point, climbing all over things, getting into stuff, tormenting Bennie from time to time.  About a year later, Chiquito came along and Kosh matured over night.  Having a new kitten in the house really pushed him to grow up. 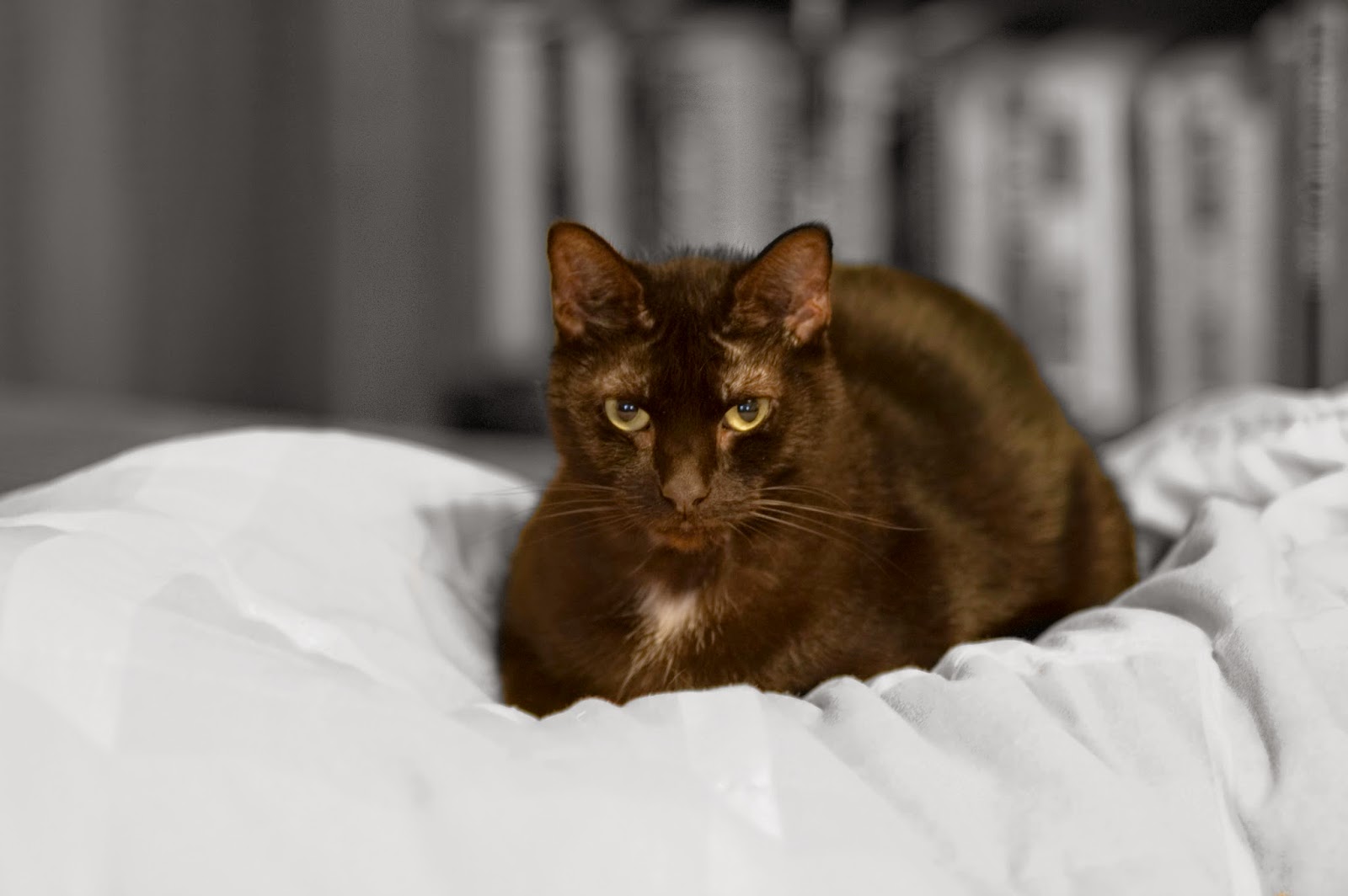 The night that Basil was put down, he crawled up into bed beside me, just like she used to do.  He pretty much stayed there the rest of his life.  When I was sick last year, he was always right by my side.  We called him my "Doctor Kosh."  He would walk me to the bathroom and lay as close to me as possible and purr to comfort me.


He started acting sluggish over the weekend and stopped eating at all Monday night.  We took him to the vet yesterday and the diagnosis was advanced kidney disease.  Ironically, I was supposed to call this week for an appointment for him to have a six month follow up check up.  The vet said that his levels were so off that there really wasn't any option for treatment.  Even sweet little buddy cats can't get a kidney transplant.  The misery he was already feeling was only going to get worse as the toxins continued to take over his little body.

We held him and loved on him and kissed him and cried over him and made the call that no one wants to make.  I was holding him in my arms as he slipped away.  Now, he's somewhere playing with Basil and Bennie again.

While we're stuck here wondering what to do.

So sorry for your loss. I know you will always remember him and miss him. Try to think about how loved he made you feel.
Sheryl

Oh my gosh Eddie! I'm so sorry! I know how much you loved Kosh and I remember how he was by your side during your recovery. What a sweet kitty cat. I have 3 of my own, one of which is 20 years old. We were told she had failing kidneys about 3 years ago She's still here, but we know we'll have to face the same thing you just went through very soon. It's so hard, but unfortunately it's something we have to accept when we adopt our little furry ones.

Oh Eddie I have tears in my eyes as I type this. I am sooo sorry about the loss of Kosh. I know how we love our kitties and Kosh sounds like a very special loving boy. Sending you big hugs!

Eddie, this made me cry. I know how much we all love our kitties. We have three and one of them - I love them all 0 but our little girl holds an extra special part of my heart. She has been giving me worries lately and I have been loving on her extra hard. I know you loved Kosh so much. I am sorry for you and for Keith. ((hugs))

Tears and hugs. So very sorry that Kosh was so very sick. Kosh loved so well.
Joy

Oh Eddie, I'm so very sorry. :( Until we had to let our Bronco doggie go last summer I never understood how devastating it is to lose a beloved pet. Now I do, so my heart hurts for you. Hugs!

No words. I am so very sorry.

A blessing for Kosh who departed so abruptly. We lost our beloved Molly (14) from the same kidney problem. My heart is with you. What a huge hole pets leave in our hearts when they die.

I am so sorry to hear about Kosh. You keep expecting to see them and it's hard to believe they are gone. Just know in your heart, you gave him a good home and all the love a cat could possibly want.

So sorry, Eddie. I know the pain you and Keith are feeling.

Sorry, guy. Looks just like our Midnight. I had avoided having a pet for about 30 years because we get attached, they always die before we do...

heartbreaking.
I would like to say that 'time heals', but it doesn't, time just makes an opening to let MORE love in.
thinking of you.

You forgot to tell them he was COOLEST cat. Ever. And that he had an awesome "mommy". Me and Nurse Chiquito love you.