First off, lookie here what I done gone and did: 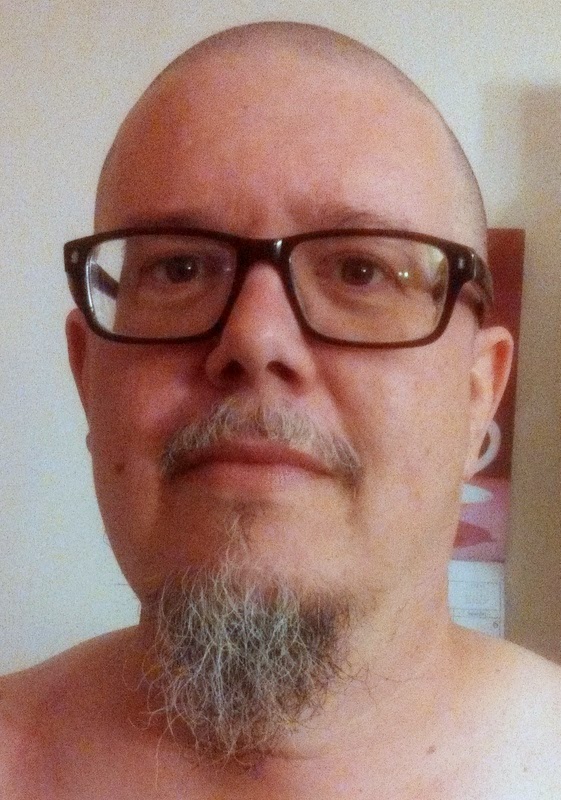 Apparently, the back of my head is a tad misshapen.  Also, misshapen has two "S's" in it.  Who knew?  I also do not know how to do that "S" thing right when there are more than one of them.

Call it a stress reaction or a mid-life crisis or a lark whatever you want, but I got the urge to shave my head last week.  I thought about it for a couple of days, then talked Keith into doing it over the weekend.  It came out better than expected!  I love it!  (We won't talk about how I screwed his up.  At least hair will grow back.)

My hair grows pretty fast, so this won't be too extreme too long.  I do apologize for the semi-nudity.  (Shirltess fat guy alert!)  I trimmed the pic so it wouldn't be too hideous.  I wanted a pic right away when it was done and didn't take the time to find a shirt.

It is a very interesting sensation when the top of your head feels like sandpaper.  I wanted to go all the way to bare skin, but I don't have the patience to finish this off myself or sit still while someone else does it.  I'm going to add that to the bucket list.

Next time, I'm going to do a school bus yellow mohawk.

With that out of the way, how was the week that just was?

Pretty typical.  Lots of work.  Lots of booth work.  I bought a shark.  Did a little thrifting.  Hit some yard sales.  The usual.  Oh, and I worked.

I spent Friday working at the new booths.  I finally have nearly enough stuff in them that they are looking right.  One more big load there would not hurt.  There are two thrifts near the mall, so I'm going to hit them this weekend and see what I can find.

I'm having a problem finding a sense of balance where the new spaces are concerned.  I'm selling stuff now, but I'm not being very patient.  Now that I have seen what I can get out of a space, I'm kind of wanting/expecting the new spaces to do that too.  Right now.  Two new spaces just can't do what all my long-established spots at the other mall can, no matter how much I want them to.  When I was just starting out with one small booth, I was excited to get the sales I'm having now at the new space.  I need to remember that and stop putting the cart before the horse.

And figure out what my regular work day is going to be over there.  It can't be Friday all the time.  I really need that whole day to tend to the big spaces.  Speaking of the big spaces, it was an interesting sales week over there.  Really big days on Monday (!)  and yesterday.  Good, okay, and so-so days in between.  We're continuing to fight the construction-created appearance that we're closed.  There is supposed to be some signage in the works that will help.  I hope.  I'm moving some furniture again, which is boosting my sales.  It had fallen off a little during the beginning of the month.  I remain optimistic for fall.

Saturday was one of the most flat-out interesting yard sale days I have ever had.  Not just for the finds, mind you.  (Although they were fun.)  Sometimes, you meet the most fascinating people--both good and bad.  It was one of those days, for sure.  I need to finish taking pics of the finds, so you'll get the whole scoop either tomorrow or Wednesday.

In the meantime, here are some previews.  I forgot to get a full Mazda shot again, so this comes after a large item had been removed. 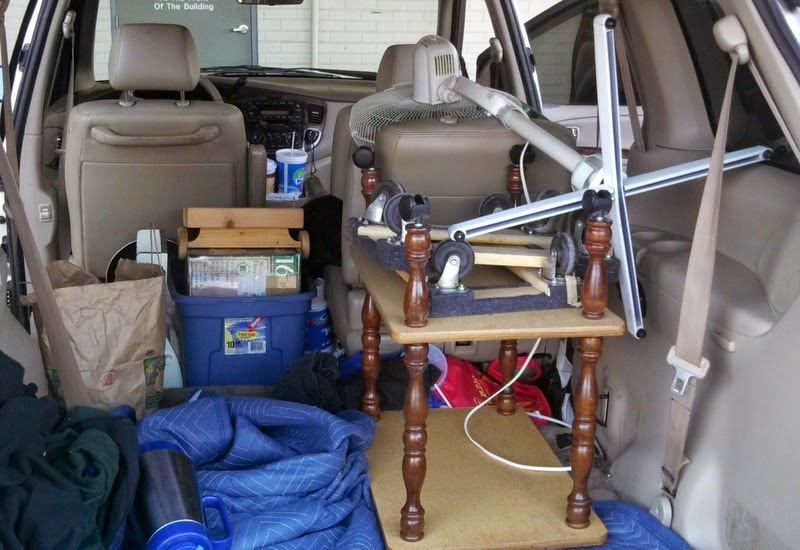 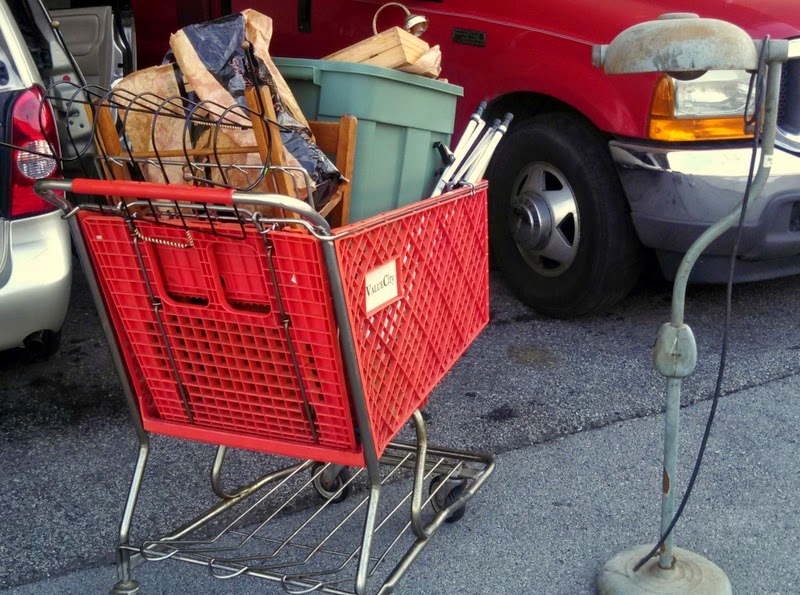 I also bought a small load of yard sale leftovers from my uncle on Friday.  It was the tail end of the stuff from his junking days, so there was some fun stuff there.  That's always good.

This coming Saturday is indoor sale day at the Peddlers Mall where I have the big booths.  Should be a good time and lots of sales.  I'll be doing 20% off.  It's also sidewalk sale day at the comic shop, so I'll be joining the nerd herd one more time.

Good times all around, huh?

Too early in the morning here - I thought one of your labels said "Bald Eagle" instead of "Bald Eddie" I think it is a sophisticated look. Last year there was a big road construction project on my daily commute. The city of Denver put up fairly large signs with the business names on each block and a big arrow showing how to get into that block. Hope your mall gets something posted to help.

My son does the same thing, always surprises me to see the back of his head. Everyone needs a good clear head shot. I took some when my hair fell out. Amazing how cool the air is on a bare head. Alway like seeing your booths as you are working on them.
Hope the signs go up this week.
Joy

WHOOOOOA!!!! OK, this was on your bucket list huh. Well done, really! and you now can try out for the part of the Genie in Aladdin! Glad you had a good Saturday. I wish I lived closer I have a trunk full of stuff I would give you for your booth! Enjoy your day!
hugs,
Linda

probably not for me, only because I burn too easily as it is. but YOU are sophisticated!

This is a hard rocker dude look,Eddie. I like it. Good news on the sales for September - ours have flattened out after the highs for summer. It is nice to know other families carry the junkin' gene.