I just realized that I haven't done a major treatment since the second infusion, which was my first with the Purple Power Port.  (Engage!)  When I got that infusion, you could actually hear the nurses whispering to each other in the clinic:  "He's got a port now."  "Oh, he's got a port?"  "Did you hear he's got a port?"  Seriously, the nurse that was handling my infusion almost ran to tell the head nurse about it.  I think I had a reputation.

To use the port, it first has to be accessed, when they put the IV in.  They also draw out a tube of what they call "waste blood" which probably fascinates me more than it should.  Everyone has to wear a mask for this part, including me. 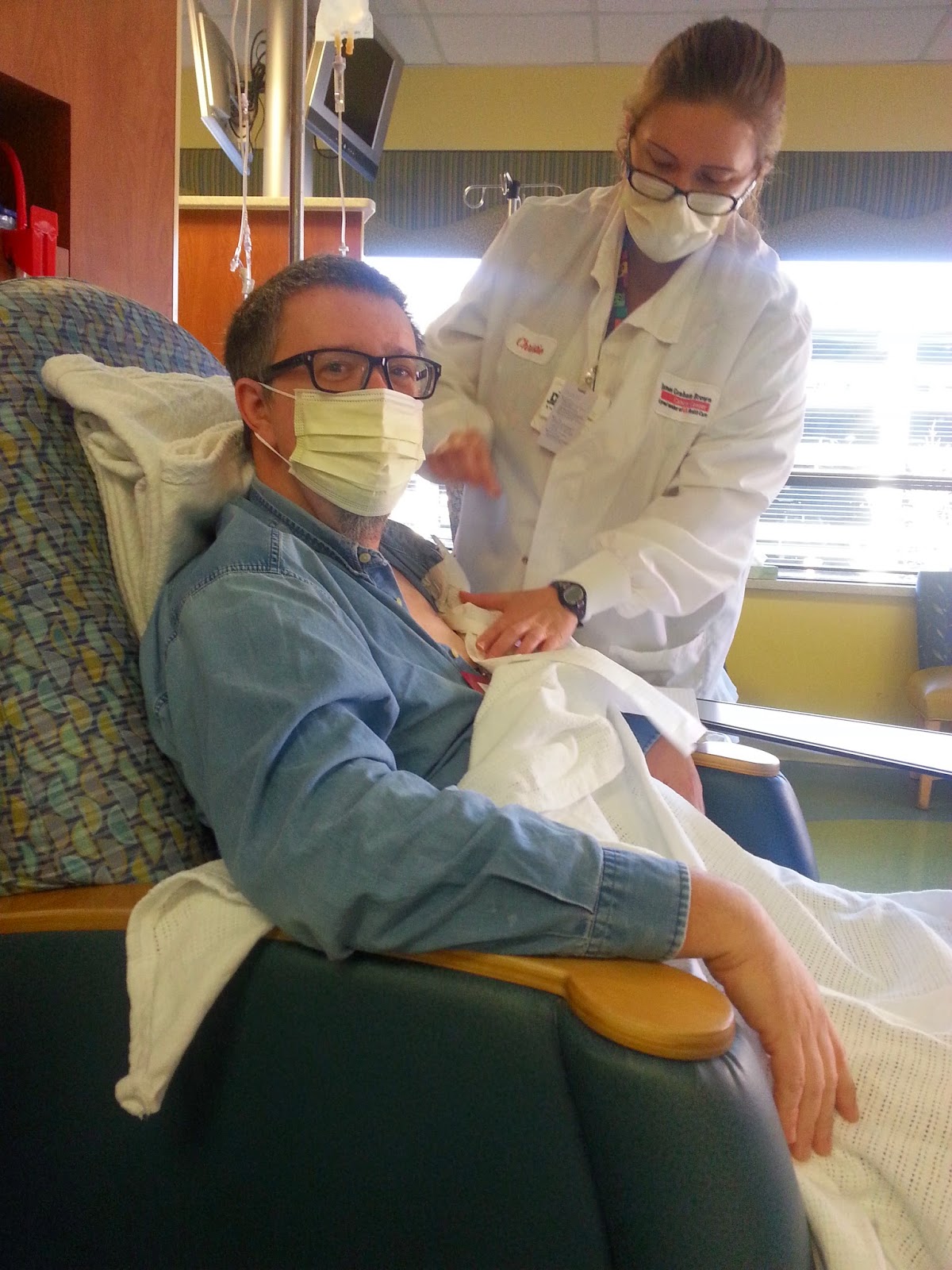 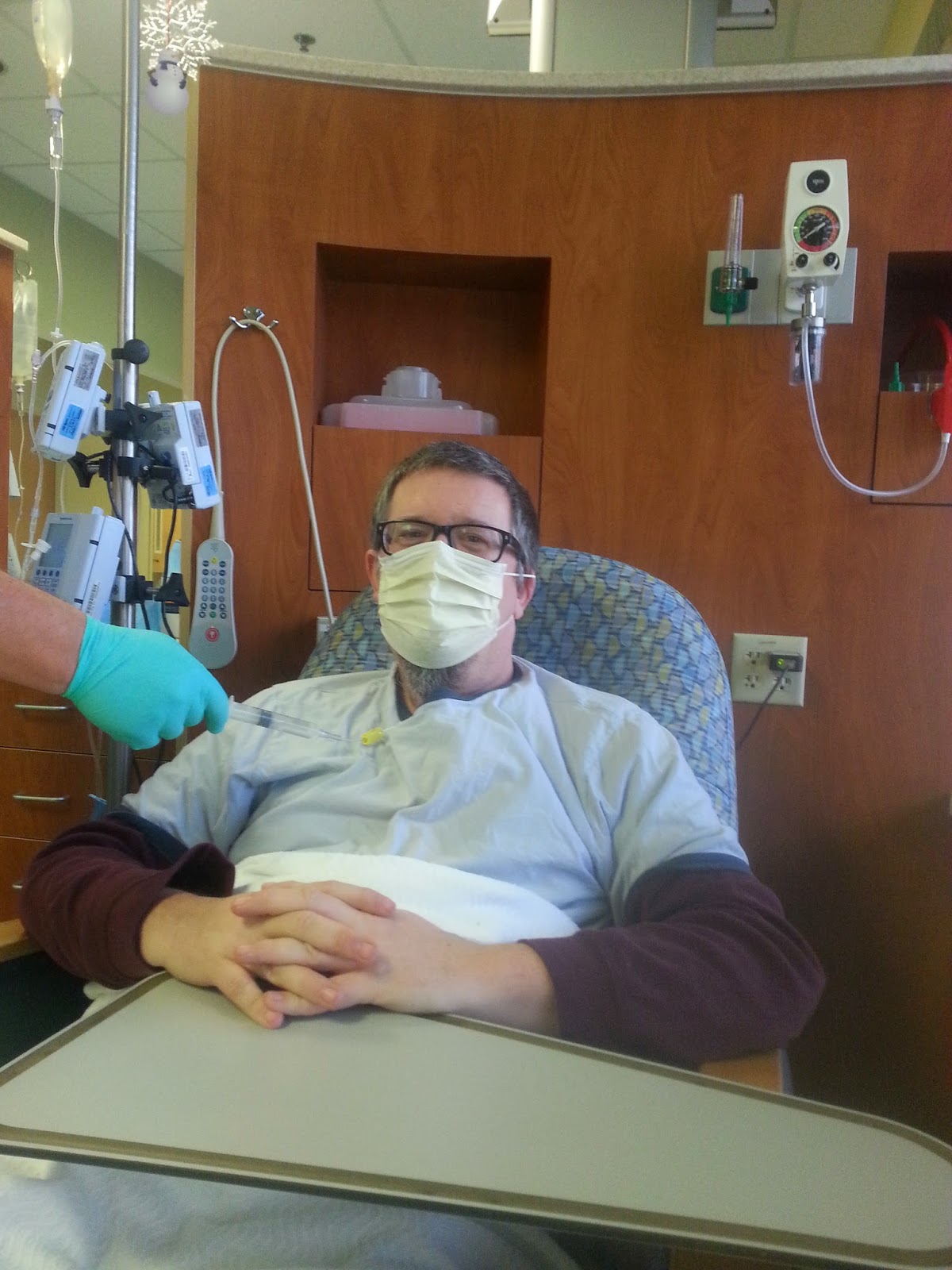 I do think it's a good look for me.  I would have been an awesome super-hero!  Or, if that didn't work out, a train robber.

One of the things that always strikes me when I get a treatment is how boring it really is.  You hear the words "chemo" and "infusion" and you get all these images of glowing, humming chemicals and labs and people's hair falling out immediately as they turn green and huge and go on a rampage.  (Oh wait.  That's the Hulk.)

You basically just sit and watch your IV drip away, wondering what that stuff is going to do to your insides.  The issues and side effects usually happen later.  My infusions this time around take 90 minutes.  I think they took about that last time, but they had to slow the drip sometimes because it burned.  Add in the wait for the bloodwork labs to come back, so they can see if you're clear for the injection, plus the time for the hospital pharmacy to mix and deliver the drugs (which is never done in advance due to the expense of the meds), and that's a lot of sitting around.

I bring my big puzzle book to pass the time. 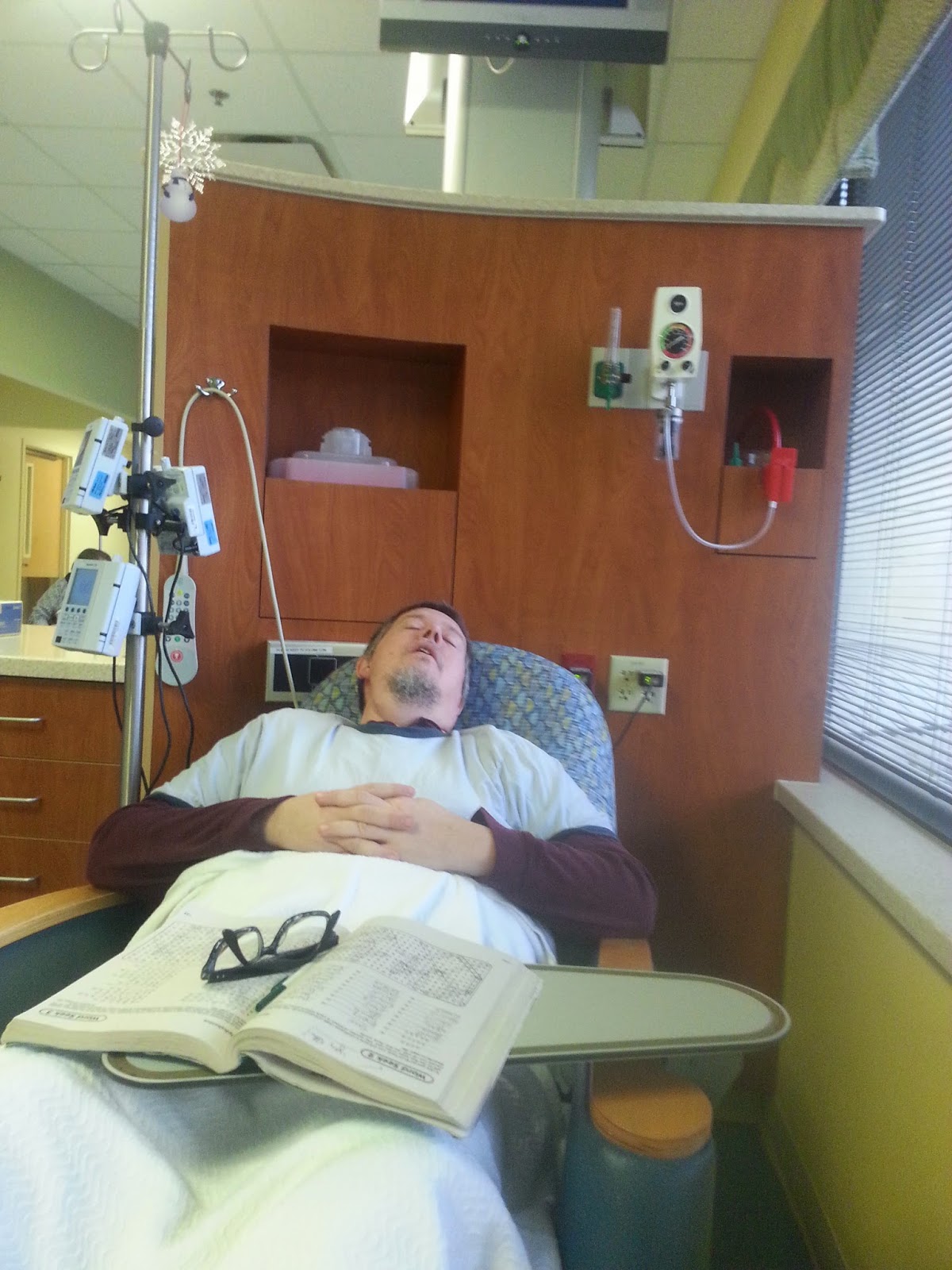 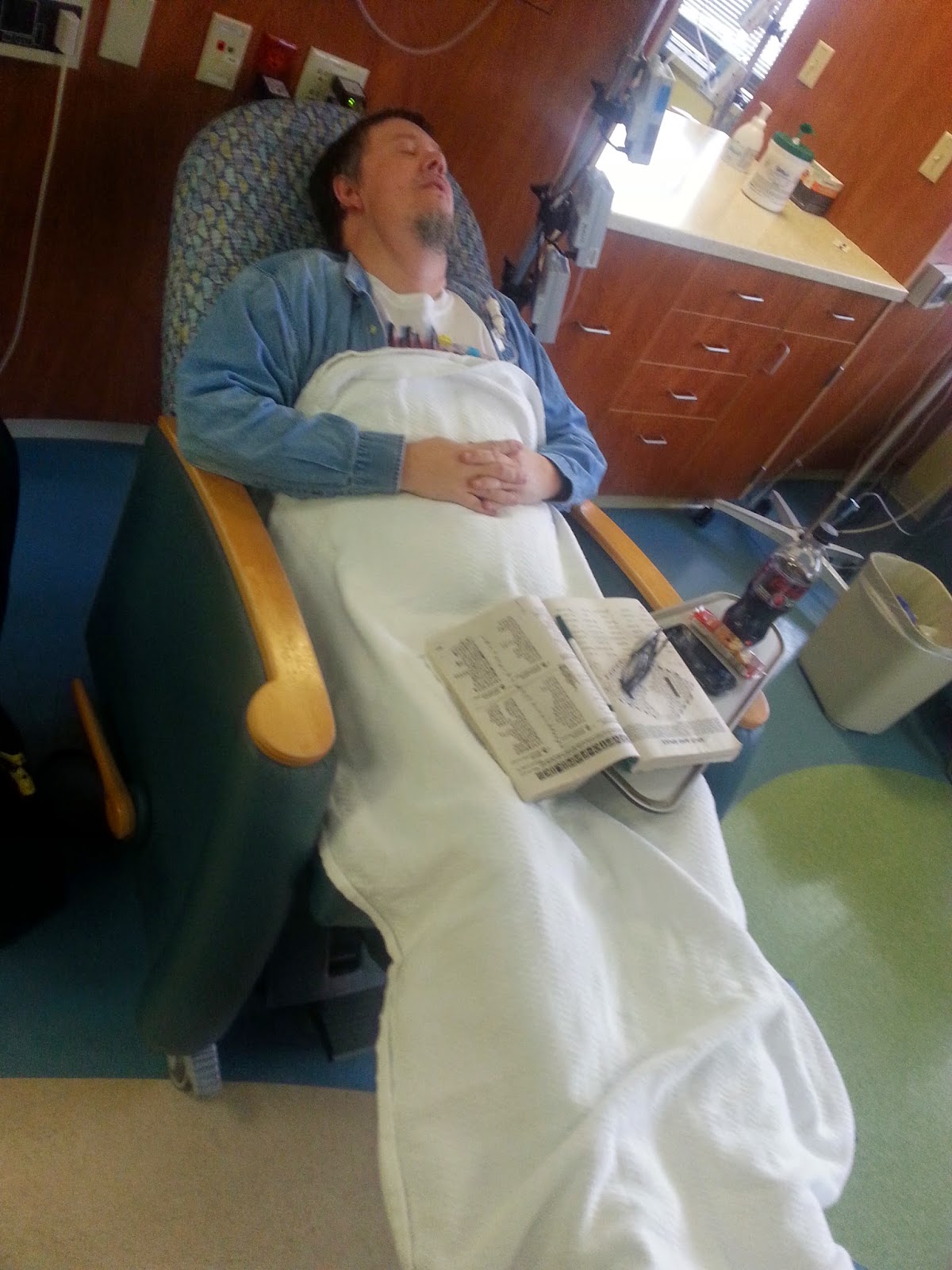 In that first pic, I haven't even been hooked up yet!  The lab and the pharmacy were both backed up that day.  It took forever!

Keith?  Well, he takes pictures.  I've noticed that we seem to be the only ones doing that in the clinic.  I guess no one else has a blog.  There are TV's, of course, but I'm not much of a TV person these days.

As of this writing, I've had the last of the four infusions for this drug.  I started the last round of belly shots (BLAM!) last night.  I have a scan scheduled for the 26th to see what this treatment has done and a consult on the 27th to discuss next steps, if any.  We'll just have to wait and see.

I'm doing okay with the side effects, mostly.  The fatigue is different this time.  Last go-around, it was constant, like a huge weight I was dragging around.  This time it comes on sudden.  I can be okay for a day or even just a few hours, then WHOMP!  I try to take advantage of the time I have, but even then, I have to take a lot of rest breaks.

As far as my internals go, I haven't had an issue with the dread diarrhea.  My problems there are on the other end of the spectrum.  I'll let you figure the rest out.  It's bad enough that I have to fill out a survey about my poop habits at each treatment.  I won't turn this blog into "Eddie Poops."

I do have a lot of dizziness, usually when I get up or have to stand.  It can also be a precursor to the fatigue.  Usually, it's how I know I need to take a break.  It's not an all out dizzy, whirling around, get the smelling salts, where's the fainting couch, oh wait we sold it to a junker, I guess I'll have to swoon on the floor, call 911, but only let the hunky EMT do the mouth to mouth, kind of spell.  It's more like a lot of lightheadedness, what my grandmother used to call being "swimmy headed."  I used that phrase to describe it during the last consult and the LPN who works with my doctor cracked up.  She is originally from India, so she'd never heard the expression before.  She kept referring to it as "swimming head."

"Besides the swimming head, anything else you need to tell me?"  Then it was my turn to giggle a little.  My grandmother would have loved it.  Except for the part where I have cancer, of course.  She died from breast cancer.  My mother died from lung cancer.  I'm not going to make it a trifecta.

That's where things stand right now.  The fatigue may not sound like much, but when I share some of the other things going on right now, you're going to see why it's really interfering with things.  I take it as easy as I can.  I rest a lot.  I nap a lot. (Chiquito loves this part.) I let others help and do stuff, but there are some things that I'm the only one who can do right now.  I keep chugging along, because I have to, thankful that I'm not having any worse effects.

I'll keep you all updated.  Thanks for all your thoughts and hugs.  I feel them every day.

So glad you have kept your sense of humor. I am praying and hoping for the best outcome for you. Keeping up your spirits is fantastic. Thanks for my morning giggle.

The photos are great...let's us see how 'exciting' chemo is. No really, I'm glad those treatments are over now. Hoping your energy levels go up up up! I can't imagine how hard this is for you. I'm ready for the wedding!!!
hugs,
Linda

Well one more positive about the port is that you have your hands free to do crosswords. I'm a lefty too. Thanks for the update. Waiting for your wedding post. Hugs.
Joy

I;'m sort of relieved to see that Chemo is a boring process. I always pictured lasers and people behind glass while clouds of vapors and smoke engulfed the person getting the treatment. Although, for what it does to you (side-effects), you really should get a little smoke and vapor. I am sorry that you are going through all of this but your sense of humor is strong and your desire to f*ck cancer is the best part!

If I was there, I would help you in any way I can. You are lucky to have Keith to help you and take these photos. Thank him for us, okay?

PS - Disregard my whiny post today as I have NOTHING to whine about. Sorry about that.

Thanks for the update. Glad to hear you are nearly done with this round of treatment and ready for next checkup. I'm so glad you got the port; we both need to bless the doc that invented that little piece of equipment everyday. Your chemo room looks lovely; the place I was going to looked like a really bad dive bar
containing mismatched recliners (and no alcohol). Right after I graduated they moved to a brand new multizillion dollar treatment center. By the way, I asked my radiation oncologist for superpowers, but it didn't work. Being as you're a teacher, you probably already have superpowers. Sending you a giant virtual hug, and some extra energy from the sunny West.

I didn't know you were a teacher Eddie. What subject do you teach? I'll bet your students adore you. I love the shirt!

Ill keep you in my thoughts and prayers. Hang in there.

I've been thinking about you, Eddie! And I can't wait to hear more about the wedding!!

Now this is the quality of blogging we have come to expect from the Renaissance Geek. Glad you're OK, buddy; I've had too much death lately, including one just yesterday.

A new career as a train robber huh? Thanks for the update. Happy thoughts your way....

I am in awe of you. To keep your wonderful sense of humor through this ordeal is amazing. Keeping you in my thoughts and prayers.

Hugs from one lefty to another.