It all started with one very badly written letter. 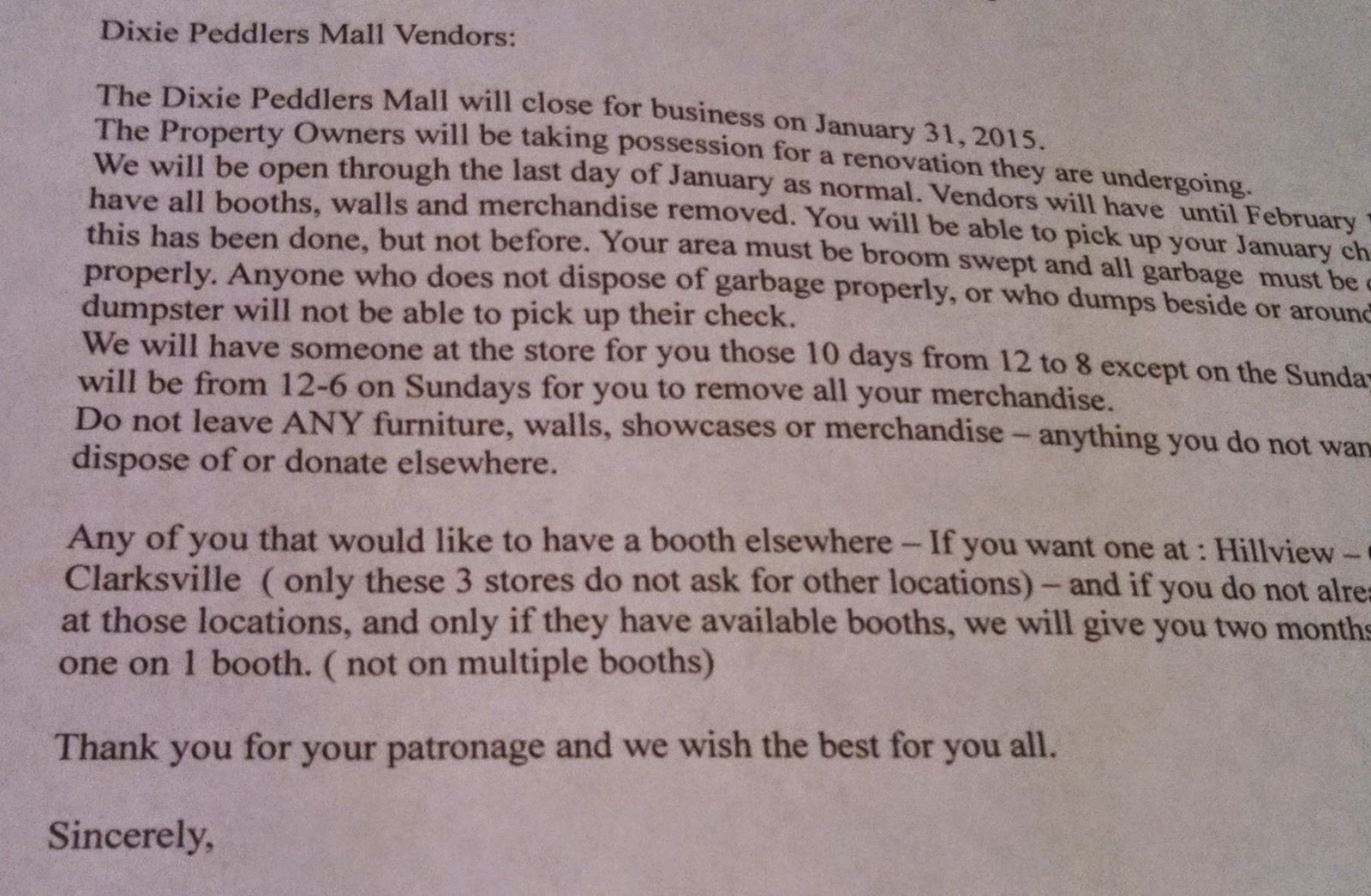 Kind of an inauspicious way to announce the end of an era, huh?  I still cringe* when I look at it.

I'll have a somewhat lengthy reminiscing post a little closer to the last day.  After all, I have a lot of memories in this place.  I'll miss it terribly.

This wasn't an entirely unexpected turn of events.  We all knew that the store's lease was up in June and not likely to be renewed.  I've written before about the massive construction on the building that has been screwing with sales for months.  That made it pretty obvious how the property owners felt about us.**

There was a period in the spring/summer when I kept vaguely talking about a stressful situation that was bringing me down, but said that I really couldn't say any more about it at the time, largely because things were so uncertain and indefinite.  The store came very close to closing at that time.  That's the real reason I took the space in the second store, in order to have a place to land when/if the boom dropped.  It's also the reason I have hung on there, even though I wasn't doing as well as I wanted.  Space there is so much in demand that I was afraid to give it up in case I needed it.

I did decide at that time that, no matter what happened, I was staying at the store until the very end, no matter what.  Lots of vendors were bailing based on rumors, and that just didn't seem like a good business decision to me.  I started having the best sales of my tenure right around that time, so it seemed foolish to just walk away.  Besides, I am an intensely loyal person.  This store, its staff, and management have been very good to me.  I intend to return the favor as long as I am able.

For me, it became business as usual--buy stuff, price stuff, sell stuff.  After all, I'm still going to need merch, no matter what store I'm in.

When the summer passed, along with the danger of closure, I kind of breathed a little easier.  When I got rediagnosed with the cancer, I was incredibly relieved that I wasn't having to deal with closing/moving the booths at the same time I was starting treatment again.

At least I wasn't until I got the letter and, all of a sudden, I was.  That's life, I guess.  It is what it is.  That's business.  And a whole bunch of equally philosophical (and only mildly comforting) aphorisms.  Of course, it's my kind of luck, that the news breaks right when I am looking at a storage room stuffed with goodies that I just bought.

And now you know why I was not very active on the blog for the first couple weeks of 2015.  I would work at the store until I just couldn't any more and come home and collapse.  I had no energy for you all.  Sorry.  I did think happy thoughts about you, if that's any consolation.  I'm good at happy thoughts.

I started moving stuff over to the other store this last weekend.  As soon as the news broke, I called over there and picked up two more spaces.  I'm still going from eight space, plus a storage, down to four, but it will help.  I've been kind of carefully planning my move, trying to keep my sales momentum up and conserve my energy for the big push at the end.  A lot of the work for me will happen in those first ten days of February, when the store will be open for us to move our stuff out.

There are a lot of lemons to be made out of this lemonade, if you look for them.  Sales are through the roof right now as customers get the word and come looking for bargains.  Lots of vendors are doing huge markdowns, which is what the people are hunting for.  I'm not going to do a booth-wide sale, but I am picking up a lot of extra sales anyway.  My goal for the month is a minimum 16-1800 buck check.  I'm closing in on that every day by leaps and bounds.

Vendors having markdowns also means lots of cheap merch out there for me as well.  I've been doing my own share of shopping as I go along.  Much of that shopping has comprised my restocking for the other store, allowing me to leave what I have in storage packed up for move out.  There's also the giveaways.  I've usually got open arms for stuff people don't want to move out, either before or after it hits the dumpster.

I'm not going nuts by any means, but trying to carefully plan ahead for the summer.  The possibility that I may end up laid up due to my treatments is never far from my mind.  I'm trying to assemble a nice stash of stuff that I've pre-priced, so that all I (or someone else) have to do is grab a tote and put the stuff out.  Even if I'm not laid up, I'll lessen the need to go out every weekend during the summer.  Hopefully, I can target the proven, time-tested good sales and have a little more "us" time this summer.

I'm going through a massive grieving process over this closure.  I will have much more to write about it over the next few weeks.  I'm just trying to muddle through and look for the bright sides to the situation.  Having more time to work the other store will definitely be to my benefit. I'm looking forward to finally growing it to its full potential.

Honestly, it's not the way I wanted to start the new year.  There's not a helluva lot I can do about that now.  It seems like I'm always rolling with the punches.  This is just a new twist on that.

*Mainly from how terribly it's written.  For goodness' sake, if you're going to dump me, at least have the decency to get a proofreader!

**All opinions expressed in this and future posts are purely my own and do not reflect or represent the thoughts of Peddlers Mall, its staff, or management in any way, shape or form.  I should also add that all of my opinions have been formed solely by my own observation of the situation.
Posted by EM at 1/20/2015 11:15:00 PM

Well damn! Just what you needed, but as the saying goes...it is what it is! Wish I could help, but I'm sending positive thoughts your way.
hugs,
Linda

I know what you mean about not wanting to start the year in chaos. I was told 2 days before Christmas that there would only be work through the month of Jan. I didn't plan on looking for another job at my age. We'll just have to do the best to our ability to get pass this.

Why do they always pick Christmas to tell you? It has happened to me twice two weeks before the mall closed. In the first I was prepared with a new booth in another place. In the second, the manager took over the lease, closed own for four months and then reopened. She did not charge anything but a nominal storage fee, but it was rough to have merchandise just sitting around. When you deal with thousands of smalls, it is the pits to move. Good luck with all the lemons you have been juggling.

What a PITA! Sorry, dude.
You're forgiven for not blogging...

I hate this fr you! I am loyal to my flea market too even though others have tried to lure me to go to their flea markets. I am glad that you DO have another one to go to though. What a lot of work that is for you on top of everything else going on in your lives! I hope sales at the new place are great. I would croak if I got a $1600.00 check. Damn!

I had forgotten about the part last summer when you couldn't talk about it but now I see how much this has affected you! Damn is right! You have a plan for the closing and move, so that's a good thing. I'm sending positive thoughts, too!

Ah, poop! Certainly NOT what you need at this time. It sounds like you have the move under control, plus with all the stock you have you can hopefully have some down time to rest, recouperate, relax and enjoy married life.