So, I declared early on last week:

"I'm not going to any yard sales this weekend."

"I have enough stuff for right now."

"I'm going to spend Saturday working in the storage unit and pull stuff out of there to take over."

By Tuesday, I was remembering:

"Oh sheesh!  That one church sale where I got that awesome school desk last year is this weekend."

On Wednesday, I got an email from the comic shop:  Nerd Herd Sidewalk Sale on Saturday!

Thursday, I saw a sign for a fundraiser sale being held by the local funky puppet group.

"Well, it's near the house.  And funky puppet groups = funky stuff for sale."

Finally, on Friday, I came to my senses made a total liar out of my self and checked Craigslist.

On the other hand, I have this to show for my moral failings: 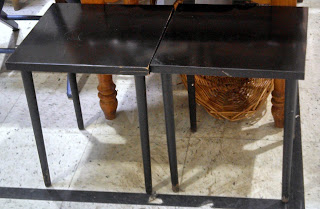 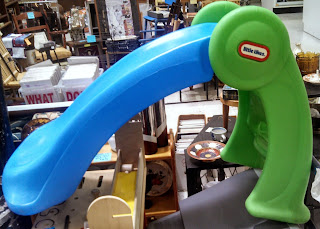 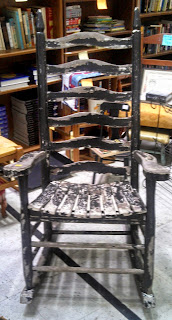 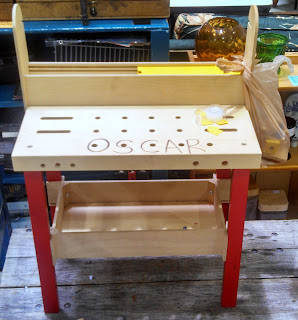 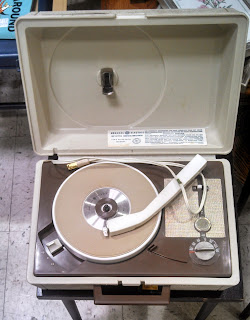 So maybe it's not so bad being a total hypocrite.  I'm not even going to mention my declaration that it would be a short day out at the sales, so I could still work in the unit.  In reality, we left the house at 9, and I was walking out of the Peddlers Mall after dropping stuff of at 6.  I just ain't real good at these declarations.

There are smalls, of course, for tomorrow.  This haul doesn't include the two bikes we bought either or the TV I got off a curb in front of a church.  Or the shorts I bought at Goodwill.  I really needed those shorts.  It's already July hot here.  I think this summer is going to be a scorcher.  We've already put the AC unit in the window.

My brother arrives on Wednesday, so I am not sure what posting will be like after that.  I'll try, but no promises.  I want to take him junking, but he's only going to be here a couple of days, so I want to get him to the best spots in town.  He sells lots of clothes, purses, shoes and the like, which is so not my area.  He also does sports stuff.  We may go to the larger thrifts in the better parts of town.  The clothes are always better at those.  That's where I head when I need clothing anyway.  Fashion plate that I am.  (Ha!)

Booth sales have been in the toilet all week.  It is just so very weird that the best day I have had so far this month has been (of all days) Derby!  Somewhere pigs are flying and icicles are hanging in hell.

Yesterday really stunk, but it was Mother's Day, so it was kind of expected, I guess.  Just because I would (and did!) take my mom to the flea market on Mother's Day doesn't mean everyone else would.  Although they should.  I bet lots of moms secretly want to get taken to flea markets on their special day, but no one has ever asked them.  Maybe I need to start a movement.

Eddie, you're weak, WEAK. And good on you for owning that!

Eddie I think you are flexible and open to changes in your plans....does that make you feel better? I'm a Mom that would love to go junkin on her special day!
hugs,
Linda

Now way could you NOT have passed up the great finds this weekend.
Hugs, Joy

It's Monday morning and I have already looked on Craigslist for sales this weekend. Ahem.

The flea markets were crazy busy yesterday here. It is THE place to take yo Momma. :)

Oh how I know that weakness! You tell yourself all the things you mentioned and poof...all out the window when the sales start. I'm a mama that loves the flea market on Mother's Day. The big Brimfield flea market is this coming weekend and my daughter is taking me to brunch first and then we're off to the flea market for the day... My late Mother's Day gift!

I SEE THE ROCKER!!! Beautiful. There are never enough declarations to stop a junker. Our family junks at every event. Deadsville at the store yesterday - unusual for a Sunday. I sold a book - yes, one book!