Well, hello there!  How was your Derby?  Did your horse win?  If so, will you take me to lunch?  My horse didn't win.  Well, sort of.  I didn't really have a horde, but I did draw one in the Peddlers Mall Derby pool. Still, I didn't win.

Horses aside, there are some recent other winners of a sort who need to be congratulated:

Good blog friend Roger just celebrated ten years of his blog!  It's even more amazing when you consider that he actually manages to blog every single day!

Linda at A La Carte recently became a grandma for the second time.

Shara just expanded her booth space at one of her flea markets.  Long may she sell!

Distressed Donna also recently had a blogiversary.  I'll have some more to say about that in a longer post.

I'd also like to recommend a really good recent read at Things I Find in the Garbage, probably the best trash-picking blog out there.  I have to admit, he's got me checking to see when move out day at the local colleges is.  Free stuff is free stuff, after all.  I like this post because he touches on the issues of consumption and its environmental impacts, which are topics that I roll around in my head from time to time as they relate to re-selling.   There's a post for me in all of this that has needed to be written for a while now.  Maybe I'll finally get around to it now.

The post at TIFITG reminds me of the time that Keith and I were moving out of the apartment we had been in for nine years and into the house.  Our apartment was close to the University of Louisville, so there were a lot of students living in our complex, as well as the surrounding apartment buildings.  When we had gotten down to the things we did not want to take with us, we took three or four carloads to Goodwill.  That left some large items that we didn't really have room to haul in the car.  I had some boards and cinder blocks I was using as bookshelves and an old desk that was too small for my needs.  Instead of tossing them, we left them sitting beside the dumpster.  I figured that one of the students in the area might want them.  They were gone before we pulled out of the parking lot of the last time.  I guess the relationship between students and the trash goes both ways!

There wasn't a Mazda shot this weekend because we simply didn't have time to do it.  Keith had an afternoon commitment that meant we had to unload stuff quickly and get moving.  Let me tease you just a bit with the finds in anticipation of the full reveal tomorrow:

That's what the tag I made for the lamp says!

Despite being Derby, there were a lot of yard sales going on.  This was largely due to the rain last Saturday, which cancelled lots of sales.  We hit the annual Derby street sale which is held by several dealers and their friends not far from our house.  Stuff is always plentiful and prices are generally good.  I was a little disappointed that the one guy that always has fun smalls had nothing I was interested in.

One of the sales I wanted to hit did not seem to be happening, but that just made more time for what turned out to be one of the best sales I've been to in a while.  Tons of vintage toys and really good prices.  Despite the fact that I had to work around a couple of guys and their constant eBay searches (Arrgh!), I got a lot of good stuff at this one.  I'll have pics of the finds tomorrow.

It was also a fun walk down memory lane.  There were so many toys and books there that I had as a kid!  I love it when that happens.  I heard the seller talking to one of the shoppers, and it turns out that she had conducted her father's estate sale about six or so years ago, which I had attended.  He ran a print and bookbinding shop, and there were massive amounts of all kinds of printed material at the sale.  I got a nice sized stack of vintage romance comic books and a bunch of religious tracts a that sale, which is why I remembered it.

Of course, the real highlight of the day was Free Comic Book Day.  I had planned to visit four shops, but only made it to two.  The reason? 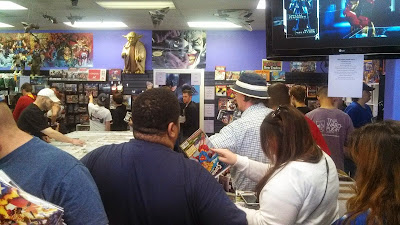 Well, there were big crowds, which meant long lines.  But the sales were worth it!  I'll have more on that in a few days.  I also managed to get a hefty stack of the FCBD books. 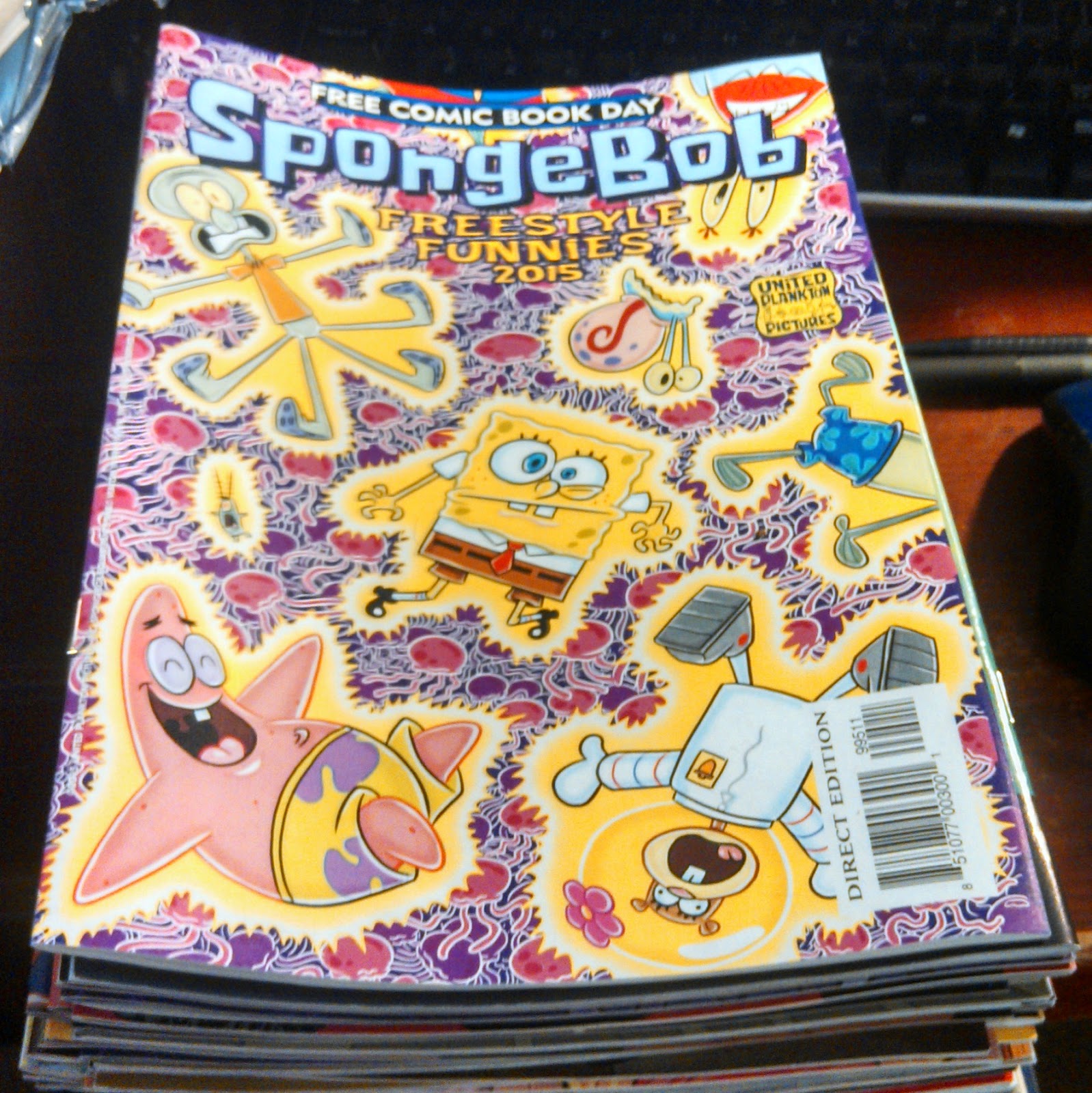 I missed out on a couple of the ones I wanted, but I had the chance to get a few other titles, so I did.  You know me and free.  I'll end up passing most of them on in some way or another.

I did see something disturbing at one store.

My brother is planning to come up for a visit next week.  I am really excited for that.  I can hardly wait!  We don't get to see each other often enough, so we really have a good time when we're together.  I've got a lot to do to get the house ready for his visit, though.

Booth sales were actually good for Derby Weekend.  I had strong days on both Oaks (Friday) and Derby (Saturday).  I'm hoping that this is a good sign for the rest of the month.  I was working the other day when another vendor gave me a dining table, an end table and some other stuff she didn't want to move out of her space.  You know me and free!  I took it all, even the broken down pressboard writing desk that was ready for the trash.  I put the desk in my booth with a "free" sign on it and it was gone by the weekend.  Never hurts to repay the "free karma."

Things are sounding good. Free desk is sort of like putting free stuff on the curb. Gone.

Good to hear that the sales were not as low as you thought they would be. I just want my booth stuff to sell. There is always more waiting to go in.

Thanks for the shout out! Love the child's chair. I used to curb shop until our city banned putting things on the curb. Enjoy your time with your brother.

Thanks for the shout out!! I'm having a great time enjoying my newest grand!! I live in a college town and the dumpsters/curbs are the place to look for free furniture this time of year for sure. I have a large chest of drawers that was a free dumpster find a few years ago. Love it! Glad you had a good buying weekend. I always look forward to seeing your finds. I'm going to check out a couple of the blogs you mentioned! Love finding new bloggers who recycle and junk!!
hugs,
Linda

You're sweet for the shout out. :) Sounds like you had another good weekend. Sorry you didn't get all the comics though. I couldn't find anywhere around here that was doing Free Comic Book Day.