A recent find from a junk store run with my uncle. 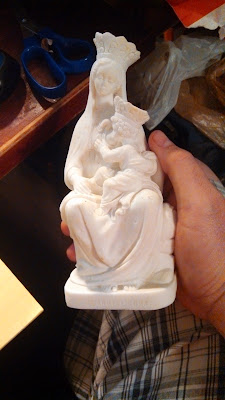 It's going right into my collection.  I've always wanted a figure like this.  Why?  Well, let's take a look at what Jesus is doing. 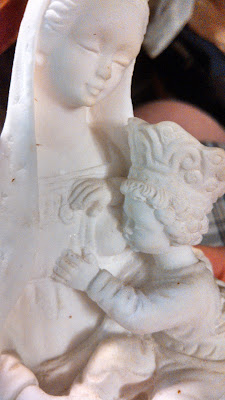 First off,you really have to admire a kid that age who can balance a heavy crown like that on his head and still nurse.  Secondly, this is not some kind of hoax or practical joke.

Images of Mary nursing Jesus are referred to as "Madonna Lactans" from the Latin for "nursing."  There was a particularly popular Spanish devotion in the late Middle Ages to Our Lady of La Leche, from the Spanish word for "milk."

For me, it's one of those fascinatingly oddball medieval incongraphies that I just totally love. The image is supposed to portray Mary's maternal tenderness and humility, along with Jesus' humanity and vulnerability.  Of course, slapping crowns on both their heads kind of runs counter to that idea, but there are a good share of Lactans images that do not contain crowns.

Devotion to Mary as a nursing mother was popular among new mothers and mothers to be, so Madonna Lactans came to be considered the patroness of these women. During the relic trade of the Middle Ages, vials of Mary's milk were a popular item.

Eddie, Eddie, Eddie! Where oh where has a statue of Mary nursing Jesus been all my life????? I absolutetly think this is another odd item that only you would share on your blog! Thank you, since I had no idea! LOL. I nursed both my girls and my daugher has nursed both her babies so this statue just 'speaks' to me! What does it say??? 'Want Milk' :)

Again something I didn't know. Keep having fun. Hugs.
Joy

I grew up as a Catholic, I have a decent collection of Madonnas and I have NEVER seen a nursing Madonna. Thanks for teaching me something new and unusual. Enjoy!