This is most likely the only post for this week, so read it carefully and treasure it always

It's been a bit of a hectic and busy week or so around these parts, hence the lack of posts.  My brother was here last week, and I've been spending this week getting ready for something special.  More on that in a minute.

Before I get into the post, I do want to assure everyone that I am okay and things are going pretty well.  I didn't mean to worry anyone with the lack of content here.

I had a wonderful visit with my brother last week.  We just kind of hung out and ate and talked and stuff we never really get to do any more.  It was so nice to see him and just sit and talk for hours.  I am planning on making a visit down to see him in the fall.

We did a little junking together.  He's an eBay seller, so he's always on the hint.  I took him to the Peddlers Mall, plus the Goodwill and the Saint Vincent de Paul that are across the road.  He loved the thrift stores and made several good buys there.  The Peddlers Mall overwhelmed him with its size, complexity and selection, but he really liked it too.  There's nothing to compare with it where he lives, except for a couple of antique malls that never get a lot of traffic.

He also said that he liked my booths, which meant a lot to me.

Keith took some pics, but has not had time to download them off his camera yet.  He's getting ready for the special thing too.  When the pics are downloaded, I'll post one or two here.  In the meantime, just imagine two devastatingly handsome dudes with a family resemblance.

We also exchanged junk gift boxes.  Mine had a Hummel Madonna in it, which is something I have always wanted for my collection.

We spent a lot of time talking about how to kick our respective endeavors up to the next level.  I think we need to move to the same city and throw our lots in together.

Saturday was about beating the rain for the yard sales.  We didn't do very well at it, because we got started very late that morning.  It was already sprinkling at the first sale we went too.  We managed to fill Mazda with the first three sales, so we had to unload at the house.

After that, we stuck with the indoor church sales on the list.  There were three of those.  By the time we got to the second one, it was pouring.  The rain and the rush kind of killed the Mazda shot potential for the day.  Many of the large items have already sold, but here's a shot of the smalls.  See if you can find Waldo. 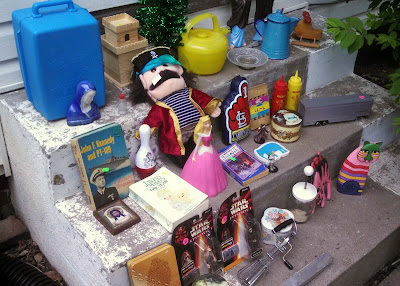 Just kidding.  He's not there.  But you might find Jack Kennedy and Jar Jar Binks instead.  The spirit of my grandmother took that pic, which explains why the top row is cut off.  I grew up believing that my grandfather didn't really have a head, since it was always cut off in photos.

This has been the most frustrating month for booth sales.  I'm selling every day, including some large items, but just not enough.  I've kind of structured myself price-wise to sell lots of small, under five buck, flea market style items every day.  The furniture, large stuff, and higher-priced smalls are the gravy that pushes a day from good to fantastic when the totals come in.  Since the higher-priced stuff doesn't always sell, that still gives me a chance at a good day on the smaller, cheaper stuff every day.

Except that here lately, the smaller, cheaper stuff has not been selling as well.  That almost never happens!  I've been selling shelves like mad again, but I only sell about half the typical cheap stuff, which drives my total down.  It's an odd kind of doldrum.  I am so far off target for the month, I don't know if I will ever catch up.  At least, I am still selling something every day.

Tuesday was treatment number three.  I was scheduled early, so I was in and out before noon, which was nice.  It's getting to where the longest part of the day is waiting for the labs so the clinic can order the drug from the pharmacy.  The infusion takes no time at all.  After my next infusion, I'll have a scan, so we can finally see if this is working or not. 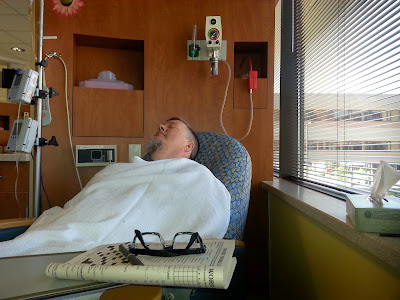 I've been rushing around a lot this week trying to get things done because we are going on vacation Saturday.  We're flying to San Francisco until June 1!  I'm pretty excited, as we've not been to SF in over ten years.  We used to go all the time, so I'm interested to see how things have changed.

We've got someone to take care of Chiquito and make sure that the bathroom faucet gets turned on for him.  We don't leave until 4:00 in the afternoon on Saturday, so I am trying to convince Keith that there's enough time for a yard sale or two, if there are any in our neighborhood.

I still have a lot to do before we leave.  Laundry and packing for one.  Or is that two?  I also need to get a prescription refilled before we leave.  I am trying really hard to get everything in the house that needs to be priced taken care of, so I don't have to deal with it when I get back.  Doing the comic books just about wore Chiquito out. 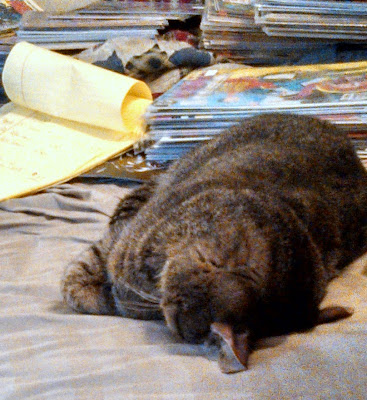 Tomorrow is booth day.  I'm gonna cram it full of stuff and pray that it holds until I get back.  I'm also going to try and sweet talk the manager into making sure that stuff isn't sitting on the floor while I'm gone.

I'd like to clean off this desk, as it is giving me a nervous break down, but I don't know that I'll get to it.  I also have to convince Keith that going to thrift stores is a thing real people do when they are on vacation.  He's afraid that I'll buy an armoire and  try to sneak it in my carry on bag.  Silly man.  Doesn't he know that's what UPS is for?  I'll just price it and have that sucker shipped right to the store!

On that note, I gotta run.  I need to get more price tags and Goodwill has been calling my name all week long.  I need to see what that's about.  I'm planning some short, silly posts while I'm gone.  And maybe one long one.  I might do a Monday Rambles, but I'm not sure about that.  I'll be posting pics to Facebook, so you can check out what I've been up to there, if you want.

Just so you don't forget what I look like: 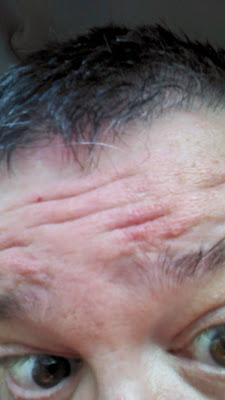 Hey Eddie. From your very busy week and wonderful visit with your brother you sound like you are doing well with the infusion/aftermath???? Hugs. Big WOW on both of you on your upcoming trip. Pictures when you get back???? Hope you find lots of smalls and have a great time.
Joy

Eddie I am so excited for you! I love SF and haven't been there in years. Enjoy!! I hate that sales are down but hopefully things will pick up soon. Yes, find someone to turn on the sink faucet for Chiquito while you are gone. If I lived close I would be glad to help with that as I am an expert by now!
Big Hugs,
Linda

I looked for Waldo before I read the next line. SUCKER. I hope you have a great trip - you need some fun and relaxation. I always thrift on my trips - my hint is to NEVER buy a souvenir at any place you go - then hit a thrift for a t-shirt and knick knacks at a fraction of the cost. Or thrift something cool for yourself that you will remember was from your trip. That's what I do! Who wants an ashtray/coaster set/ceramic plate these days??? :)

Eddie, have a great vacation.

Have a nifty time in SF. LOVE visiting that city. Glad your visit with your brother was great...nothing better than hanging with family

I'd know that forehead anywhere! BTW You owe me five minutes for making look for Waldo! Have fun and go to a lot of thrift shops - that's what vacations are for.

Have a fun trip and tell Keith it is mandatory that you hit a few thrifts. Stuff will be different than in your town!

Glad the infusion went well and hopefully the bigger stuff will start moving in your booth, too!

Hope you're enjoying your vacation! I'm swooning over the Hummel Madonna... I collect them. She's a beauty.

My husband and I went to Albuquerque a few years ago and he found a great (big) Simpsons Halloween/Mt. Dew cardboard stand up store display at an antique mall for the bargain price of $15! We were directed to the closest shipping store only to find out that I was way off on my estimate for shipping it back to Indiana! It was either pay the $100 or leave it on the side of the road. It is now on prominent display year round in our house for that kind of investment!!! Have a great trip! P.S. I finally made it over to Peddler's and found at least one of your booths last week! Yay!