(I've always wanted to say that!)

We are aware that last week lacked the usual Monday Rambles that many of you have come to expect at this blog.  The truth is, a Ramble was started, but someone forgot to finish it there were technical difficulties.  We regret the situation and will endeavor to make it up with an extra rambly, Ramble now.

Life is pretty good here in the Ohio River Valley right now.  We're still having frequent rainy and cool days, but also lots of sunny, warm ones.  And sometimes some sunny and cool ones.  Snow showers keep popping up in forecasts, so I know winter may still have one last blast up its sleeve.  After all, I can remember a Derby Day with snow in my adult life!  (For those who don't know, that would be snow on the first Saturday in May, also known as Free Comic Book Day in nerd-dom.  This has been the first official mention of FBCD at this blog in 2016.)

As the weather warms up, so do the yard sales.  There still aren't many taking place in actual yards, but the listings get a little longer every week.  The church sale scene is hopping right now!  Two of the four best church sales in the city have already happened, along with several other favorites.

There was also a Big Flea this past weekend, and I got a chance to go to a special place.  I don't want to spoil it, because I am working on a post about it, so let's just say that it rhymes with "Boot Hill Cow Pet."  Sort of.  Kind of. Maybe.

The booth is humming right along, as tax season continues to unfold.  After this past weekend, March could turn into my best month ever, depending on what happens as we get closer to Easter and people start thinking more about buying plastic eggs and chocolate bunnies than junk.  For the record, I do have a small stash of plastic eggs that they're welcome to.  The chocolate never seems to make it to the booth. (AHEM!)  Even if sales end up slowing this week, I'll still have one of my top months, so I'm happy.  I'm taking HUGE Mazda loads every week now and working several day stretches to keep up.

So what is selling?  Here's a recap.

COMICS  Stacks and stacks at a time, it seems. I have priced and taken every one I have in the house, So I need to go get my last two boxes of Mount Sorrow.  I have a feeling that I'll be doing some major restocking on Free Comic Book Day (second mention).  This last Big Flea trip disappointingly yielded only three (!) comics.

BOOKS  I only have maybe six books left from that old book buy I mentioned a few posts ago.  My children's books got cleaned out a couple of weekends ago.  I've been working the booth on several recent occasions as younger guys walked out with armloads of books.  It's always kind of cool to see the Kindle generation buying words on paper.

RELIGIOUS STUFF  Like I said in my last post, it's taken a while for my religious section to catch on, but it finally seems to have clicked with customers.  The book sales extend to the religious titles, especially hymnals.  Everybody loves a good, old hymnal.  Yesterday, it seems like I must have sold half my religious stuff, according to my report.  Another thing to dig off the Mountain!

SHELVES  First it was big shelves.  Then it was small shelves.  Then it was that cool white cabinet.  Every time, the booths had to get a makeover.  I think I've ended up with a slightly new look every week this month.  I kind of ran out of time last week to finish up, so I'm planning to stay at the mall for the rest of the week and rework it all, again.

CHAIRS  Adult-sized.  Kid-sized.  Dining Room.  Side Chairs.  Easy Chairs.  Stools. Folding Chairs. When the month started, I had a surplus of chairs.  All over the place.  Now I only have a handful left.  Another trip up Sorrow Mountain!

BAMBOO  You might remember a bundle of bamboo poles from a recent Mazda shot.  They're gone!  As well as the ones I found to supplement that stash.  I got them because I thought they were cool-looking.  I had no idea I was on to something.

WOOD BOXES  Crates, small boxes, card boxes, and such made of wood are also selling well.  Not quite as strongly as the metal ones, but they're definitely moving.

I wish I could get baskets to move as well as the boxes.  They're just sitting right now.  A couple of days ago, it looked like a vintage toy spree was about to begin, but it's a little early to make that call.  What's selling for you right now?

In other words, it's a good time to be a junker!  Wheeeee!  I hope your sales and finds are also going well right now.  I need to ride this wave while I can, since Spring Break is coming the first week of April and that usually means a slow-down.  After that, the Derby Festival will be starting. Another slow-down.  Last April was not as slow as I thought it might be.  I think being in Indiana, rather than in Louisville, helped.  Things don't get quite as mad on that side of the river, but for some events, the bridges across are blocked, which does have an effect.

My plan this week is to work it, work it, work it.  I'd like to get the booths squared away enough that I can spend next week focusing solely on the Mount of Sorrows.  That's actually been the idea behind the last couple of weeks, but it's not played out quite that way, due to the strong sales.  not a bad problem to have, except that I really, really want (and need) to work in the storage unit.  Sometimes, it's hard to prioritize when you're a one man show.

Finally, a query.  Does anyone know who these little guys are? 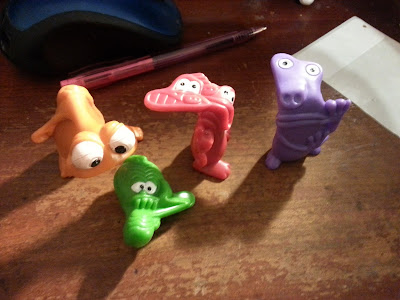 I got them in a baggie of toys from a church sale.  They're marked "Saban" on the bottom, but I didn't turn up anything on a Google search for Saban characters.  Saban was the production company that unleashed the Power Rangers on this country in the 90's. 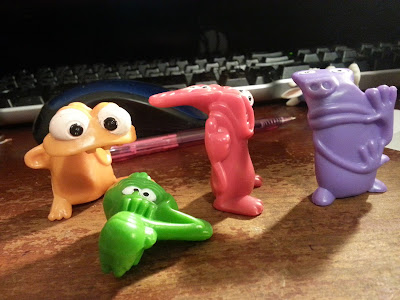 Let me know.  Thanks.

Have a good week.

Good sales make happy Eddie. I always look forward to you writing about what is selling in your area. I suspect you are VERY reasonable in your pricing. Great turnovers. Next the Mount of Sorrows - hope you have a lot of good stuff to pull out. Hugs.
Joy

Sales are down at my booths. Spring Break usually helps though. More people can come into town without the college kids everywhere. You are selling, selling, selling. I am on a metal kick lately - finding lots of cool old metal file boxes and stuff. But they aren't selling right now. Junk Ranch bound though. Hey! You should make an AR trip for the JR some day. Yes!

I love to see your sales going well, it does make for a Happy Eddie!! I see research Shara found out what those toys are. I'm ready for some outdoor time soon.
hugs,
Linda

Glad to hear things are really still selling for you. My sales have slowed down a little bit from the past 3 months... although we still have 9 days left in this month, so I could be surprised! What has been the biggest sellers for me this month? You will laugh because it's an odd list: novelty pencil sharpeners shaped like antique things (typewriter, fan, globe, etc), souvenir pennants, vintage camera stuff (just when I thought that phase had died out), stoneware crocks, and fire king mugs. Plus tons of other random stuff!