Stay out of my way in Walgreens today!  The Reeses Eggs are half off!  This has been your Fat Guy Rampage Alert for the day.

My neighborhood has been invaded by contractor dumpsters of late.  There are easily half a dozen within a block or two of the house.  Last week, I was walking to the bus and just happened to pass one of them.  I took a quick look inside, and there was a cute face staring back at me. I didn't have time to dig further, so I grabbed him and headed to the bus stop.  When I got to the booth, I put a quick price on him, since I knew someone would grab him out of my cart whether I wanted them to or not.  He sold!  (I had to borrow this pic from Pinterest to show you all.)

I headed back there yesterday, but the dumpster was all full of wood now.  EXCEPT...for a heavy, round, antique mirror resting neatly on top.  I really need to hit those dumpsters more often.

I think I'll tease out a little bit of the Mazda shot, otherwise it will be a short, short ramble this week.

The comic shop had a music giveaway on Saturday.  They were giving away five items per person.  Since Keith and I are two people, I got to pick ten items.  (Shhhhh....)  I went looking for a few interesting/oddball items.  Did I find any? 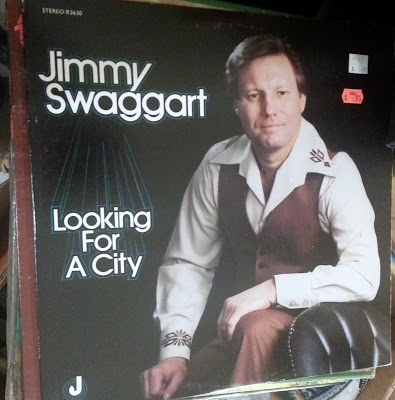 They also had a whole bunch of book and record sets.  I picked out my five, and there were five left, so I went ahead and bought them too.

I picked up a bag of toy odds and ends for a buck.  It was mostly bits and pieces from Lego sets, plus s few other items. 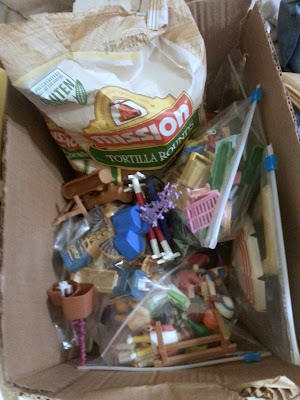 The chip bag has the broken bits in it.  Why I left it in the picture, I do not know.  I've started splitting everything else up into bags for sale.  One of the bags is going to a friend of mine who also has a booth at the Peddlers Mall.  He collects vintage metal dollhouses and then furnishes them.  He has a whole little town in his basement.  The furnishings don't have to be vintage, just the right scale.  I keep an eye out for stuff for him, and he looks for religious items for me.

It's the last little bit of March, and it has been such a good booth sales month.  I'm almost dreading Spring Break week in April.  This is the first March in recent memory that I haven't had to fret the basketball tournament, which is a big deal around here.  UK was out early and UL couldn't play, so those distractions were dealt with pretty easily.  Right now, my March total is equal to my highest month, so anything from here on out is a record-setter, even if it slows a little.

And that is, seriously, all I got today.  It's been a bit boring here of late.  Sorry about that.  How about if I throw in some awesome music for a Monday?

PS If you never hear from me again, it might be because I am planning on attending this sale this weekend. (Pasted verbatim from Craigslist)

Greetings fellow humans! We are having a multi-household yard sale and you should swing by and observe what we have for sale with your ocular circuits! We are definitely not robots from the future searching for ways to infiltrate and destroy your civilization! We will have many items including but not limited to:
-books
-cds
-records
-kitchenware
-ac unit
-cyborg memory boosters
-a car
-men's clothes
-women's clothes
-baby clothes and other assorted items
-build your own interociter set
-games
So come on over and buy some of our stuff! Who knows, you may meet the person of your dreams at our yard sale! And you certainly will not have your personality shunted into a robot body for transport into the future!

It seems pretty legit to me and it's in the neighborhood. I think it's at the house that glows all the time and has the weird antennae on top.  They also drive a really funny-looking car.  I think it's some kind of foreign model.

I am totally out of flux capacitors and this seems like the kind of place where I might find some.  Chiquito says that he's out of fluids for his cloning chambers, so I'm going to see if they have some there.
Posted by EM at 3/28/2016 01:00:00 PM

I will let you get all the Reese's eggs as long as I can lay claim to all the spicy jelly beans! Seriously, the ad was on Craig's List? I can only top that with going to one advertising adult sex toys and coming home with an opium bed.

And how often do you get a chance to build an interociter? Even if you don't buy anything, sounds like they will be interesting people to meet!

Whoa! I'm not reading the right yard sale ads! Can't wait to hear about this one!
hugs,
Linda

I love when people put some fun into their ads. I would definitely go to that sale just to meet the person that wrote it. Hope you find something good there!