Sometimes, you get more than you thought you were getting.

Friday, I had a doctor's appointment downtown, so I stopped in at the thrift that is just down the street from his office.  I didn't find too much there, but there was this. 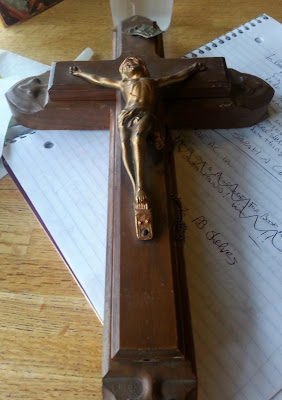 It's a vintage sick call cross.  These used to be fairly common in Catholic homes.  The top crucifix comes off and there are things inside that a priest would use if he had to make a call to anoint a sick family member.  They do still exist, but are not as common as they used to be.

Typically, when you find one, it's empty.  The kit is supposed to contain a bottle for Holy Water, a small cloth, and two candles.  Over the years, those things can get used up or lost.  This one was a good price for an empty kit and a really good price for one that still had the contents, so I picked it up.

I come across these regularly, even though it's been a while since I had found one.   They are typically not something I keep, unless I find a really ornate or really old one, but they sell well at the booth.  It doesn't matter if they are empty or full.

I tried to get the top off in the store, but it was stuck.  The wood can swell over the years and make opening the kit difficult.  Rather than risk damaging the cross or spilling the contents, I decided to buy it and work on it later.  A little shake confirmed that there was stuff inside, which was enough for me to know at that moment.

A little later, I sat down and worked the top off and found a huge surprise!


I guess that someone was using the cross to hold some of their most cherished religious keepsakes.  Maybe they had belonged to a beloved relative, and someone had wanted to keep them together.  I am thinking that whoever donated the kit had not opened it to see what was inside.  I'm pretty sure the thrift store staff didn't open it either, or they would have removed all this stuff to the jewelry case and priced it separately. 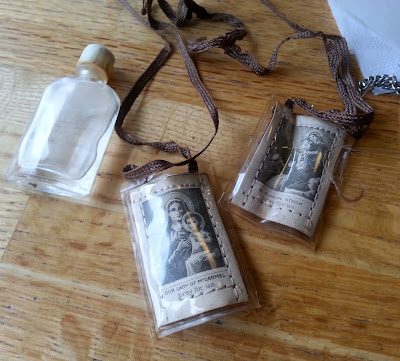 The little Holy Water bottle was probably part of the original kit.  I'll be taking it and the brown scapular to the booth.  I already have a ton of scapulars and a couple of Holy Water bottles that have labels on them.


These two intriguing little bits are my favorite pieces in the lot.

Pocket Saints!  The little containers protect the figures from damage, although you can see that the Sacred Heart of Jesus has experienced some wear over the years. 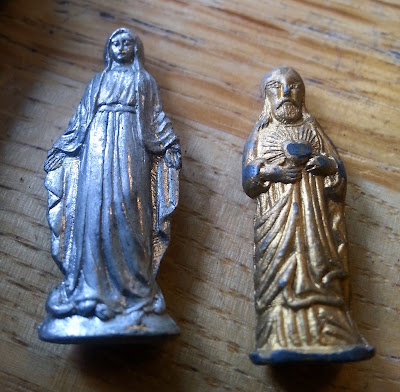 I'm totally bowled over by these little figures!  I love that they have an almost primitive look to them.  They kind of remind me of santos figures, especially Jesus.  They have that same handcrafted look.  These babies are keepers for sure! 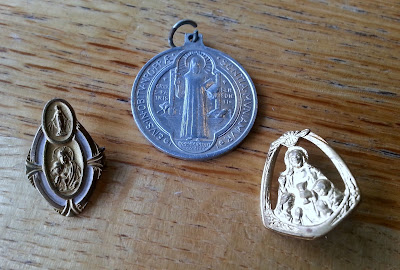 Two first communion pins and a St Benedict medal.  The pins are keepers.  I have a larger and older St Benedict medal, so it's going to the booth.  I'll make up a small set of medals and put them in a jar or little box to sell.

Saint Benedict medals are used to foil curses that may have been placed upon you by the devil or other people, by the way.  If you experience some kind of mechanical issue that does not seem normal to you, attach a St Benedict medal to whatever is not working right and it is supposed to start cooperating. 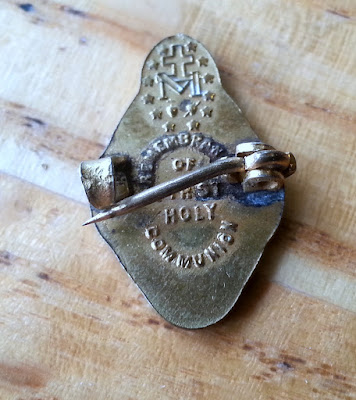 This is the back of the older communion pin.  It would have been a cherished memento. 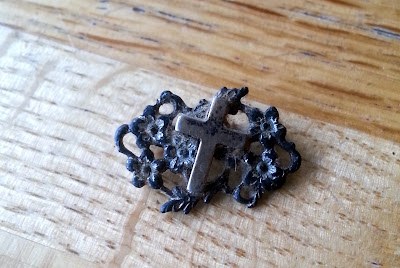 Cute little cross pin.  I love the detailed flowers.  This one is kind of generic, so it's going to the booth. 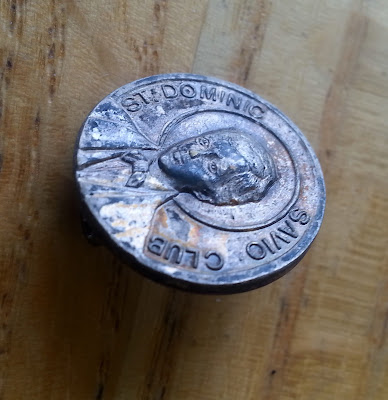 Saint Dominic Savio pin.  Another keeper.  I love it when I find items related to saints not already represented in my collection.  The popularity of some saints waxes and wanes over the years, like Dominic here, who was more revered in the early part of the last century.  It's always fun to find "by gone" devotional items like this.

Dominic Savio is one of the youngest saints ever canonized.  He was 14 when he died.  Considered the patron saint of Catholic youth (especially boys), the club would have been a gathering of youth who attempted to follow his example. 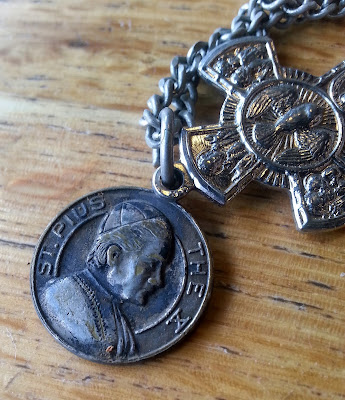 The Saint Pius X medal is a keeper.  The other thing is called a four way medal.  It combines several religious medals into one to save space in your pocket and reduce jangling, I guess.  It's also a more bang for your buck thing.  It's going to the booth.

I'm totally tickled that the Pius medal refers to him as "Pius The X" instead of just "Pius X" which is more standard.  I have never seen that before.  Little unique bits like that make something a definite keeper in my book. 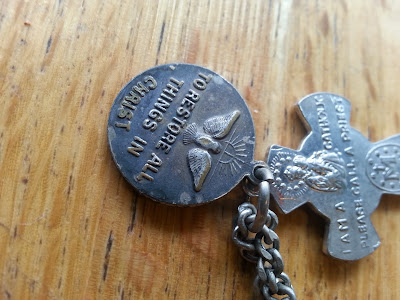 On the back of the Pius medal is the motto of his pontificate.

Pius X was Pope in the early part of the 1900's.  He was a staunch conservative and determined above all to keep the church from moving with the times.  He even instituted a spy corps to check up on priests and theologians to prevent them from teaching new ideas.  He also wrote an oath that newly ordained priests had to sign and swear to follow declaring that they would reject any forms of new thought or belief.  Seminary professors and religion teachers had to sign the oath at the start of every school year.

In other words, he would not have been the type to invite the current Pope over for tea.  (Although I do think that would have changed if he had only gotten his picture taken in a sombrero.)

He was canonized in the 1950's, becoming the first Pope to be named a saint in about 400 years.  He would be the last Pope canonized until John Paul II and John XXIII were named saints a couple of years ago. They also would not have been invited to tea with Pius.  That's got to be awkward when the Saints go marching in.

The largest group of Catholics fighting to preserve the Latin mass and more traditional ways is named after St Pius X.  They basically still recognize the current Catholic Church and Pope, but they don't like the way anything is done these days.

This was the first large scale keeper religious find I've made in a while, which made it extra fun for me.  Some to sell.  Some to keep.  Awesomeness all the way around!  After about a year of so-so sales, my religious section is finally getting some regular customer love.  It's nice to have some new stock to put in.  I have about a half dozen boxes of religious items on the far side of Mount Sorrow, but the last expedition I sent to find them never came back.
Posted by EM at 3/15/2016 05:00:00 AM

Oh, what FUN!
I HAVE missed your Religious discoveries, and learning about them!!

Gotta love those Catholics...
" The other thing is called a four way medal. It combines several religious medals into one to save space in your pocket and reduce jangling..."
It's all about the 'Convenience' (ie: Can't get up for Mass on Sun.?? We'll do it on Sat. night too!)

What an awesome find. I'm from a large Catholic family, so you better believe every older relative has one of these crosses in their house. Also, you telling all the stories about the different saints, really stirred up memories from childhood. If I lose something my mom still tells me to pray to St. Anthony to find it. You know, instead of looking for it. :)

Im not Catholic but married into a Catholic family. Very interesting post and fun to find that extra cubby. I had no idea about those sick call crosses. No idea at all.

This is so cool!! I love the cross and the medals are amazing. Your religious collection fascinates me!
hugs,
Linda

Just a little ignorant Southern Baptist girl here. I never find religious items like this in thrift stores even the Catholic Ministeries only have rosaries. This is quite the find!

What an amazing find! I am so happy that you found it since you appreciate it. I've seen those crosses that look thick like that, but I never thought about them opening up like that - good to know. I'll be shaking all the crosses now. :) I love finding hidden things in stuff. I found a ticket to the 1975 Central High Disco in a book the other day. The same? :D

Jackpot! What a great find!

Wonderful find for you, Eddie. Nothing like the excitement of a find like this. We had one of those crucifixes in the house when I was a kid. It hung in my parents bedroom. It was full, never used. I don't know what happened to it, My sis must have it. Thanks for the lessons because this Catholic didn't know some of those facts.