How about a different kind of Mazda shot?

I'm kind of mixing things up today.  I am caught in one of those booth vortexes again where every job seems to keep leading to two or three more jobs that have to be done first.  None of my "in head" visions are working "in booth."  I have seriously, literally, honestly been working since Thursday on just the book booth and I'm still not done.

At the same time, thanks to the super March sales, I am at the point where I simply have to do a massive restock.  Seriously massive.  If I don't, people are going to start calling my booths "Eddie's Empty" instead of "Eddie's Attic."  Tumbleweeds are lining up in the aisles, waiting for their chance to roll through my empty spaces.  It all looks full, but if I consolidate and tighten my shelves up, I'm probably really about a third empty.  Plus, I still have a whole shelf unit full of bunnies and shamrocks!

Since the beginning of the year, I have made a supreme effort to get stuff to the booth right after I pick it up.  On that front, I've done well, but I had a bunch of stuff ready to go into the booth that I managed to completely forgot about.  I am so talented.

All of that verbiage is leading up to this, the first ever Mazda shot taken before going to the yard sales on a Saturday.  Seriously, I've had all this ready to go forever. 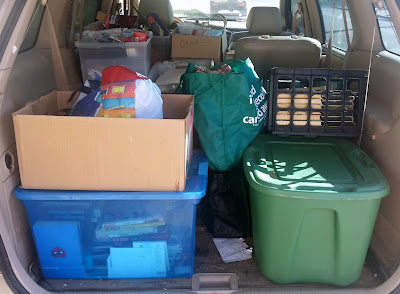 Since it's all in bags and boxes, here's a handy key to what's what: 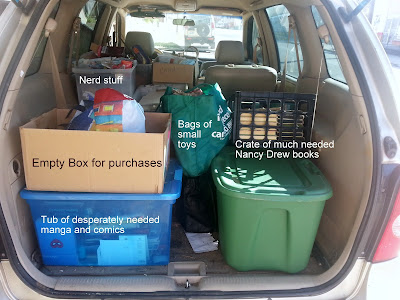 An advantage to filling the car before you go out is that it limits your buying ability and makes you think harder about your purchases.  That's right.  You can prevent over-buying by filling the van with stuff you've already over-bought.

Actually, getting new stuff wasn't that much of an issue yesterday.  It's still early in the season, so they're aren't that ,many good sales yet.  We mainly only went out because there were a couple of good-sounding sales in our neighborhood, plus the most interesting church sale of the year across town.  (More on that tomorrow.)

In other words, there were only a few purchases, and all of them were small.  I'll go ahead and toss a couple of pictures in here, since we don't have a proper Mazda shot. 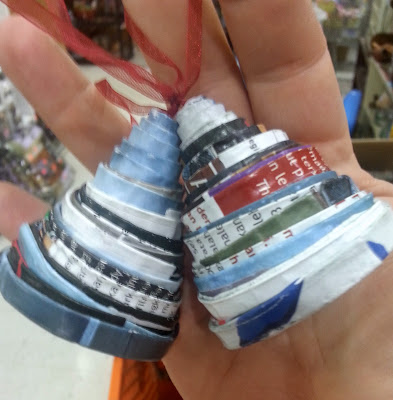 The "robots from the future" sale was loaded with oddball videos and music and books (yay!), a cute puppy (which was not for sale) and these sweet handmade Christmas ornaments created from magazine pages.  I got about a half dozen of them.

I scored this super-sweet memorial plate for Pope John XXIII at the local senior center sale.  They always have vendors in the parking lot, plus stuff inside that their members donate for the center to sell.  It was very breezy and cool yesterday (although deceptively sunny) and most of the outside vendors did not show. 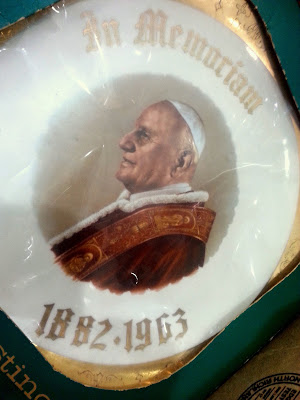 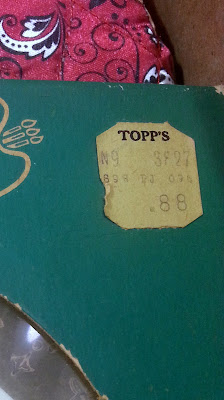 It's even in the original packaging, complete with price tag, which is very close to the price I paid for it!  One of the center members declared that the center ought to have a "yard sale room" all year round, so folks could drop their stuff off and they could sell it.  I would not object to that.  This place is only a few blocks from the house!

That sounds like a good problem to have, empty spaces. Now fill them up! Love those little ornaments. Happy Sunday.
hugs
Linda