I had a terrible existential  crisis over the weekend.  I kept wandering around and wondering: 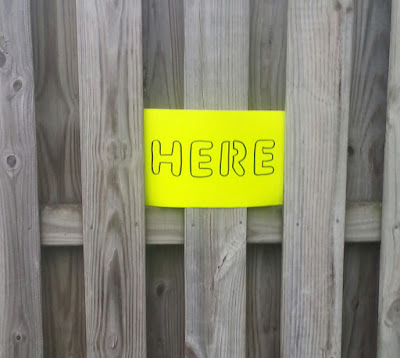 The contradictions of this junk thing get to me sometimes.  On the one hand, you just can't wait for the nicest weather so the yard sales will start in earnest.  On the other hand, as soon as that weather hits, you watch your booth sales take a serious dive.

Last week, we had one of the longest streak of the nicest days yet.  Folks are doing their yard work and spring cleaning and first cook-outs and such stuff as they do this time of year instead of going to the vendor malls.  Honestly, I can't blame them much.  Still, I got junk to sell!

As if to prove my point, last Thursday was rainy and cool.  My sales shot way back up--nearly a hundred bucks!  Overall, it's still a good month, but it's not going to set any records.  I can't complain too much.

Today will be the end of the never-ending booth update, even if I have to pile everything into a pyre and burn it!  Seriously, the madness stops today!  I got really close to finishing on Friday, but ran out of steam.  Last week was a treatment week, but I insisted on going to the booth instead of staying home and rested.  The progress I made did help, but I was moving too slow in the end to get all the way done.  Today for sure.  He said, optimistically.  If not, I'm going on the pyre too!

Oh yeah, I've been dumpster diving again. The really tall dumpster across the street got hauled away, but the other two are still here.  They put the old windows and doors from the house in the one down the hill, but I could only get to two of the windows. 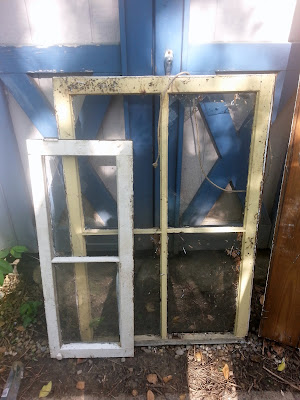 I sliced the Dickens out of my thumb on one of them.  Thankfully, it wasn't very deep.  It was a clean slice, so I think it was on the glass, rather than a rusty nail.  Still, I am going to talk to my doctor about a tetanus shot.  Occupational hazards, you know.  I've been dousing the thumb in peroxide and slathering on the anti-bacterial ointment all weekend, and it seems to be okay.

I do have a nice pair of heavy gloves that I bought for this kind of thing.  I just keep forgetting to put them on. Back to the dumpsters, I discovered a new one at a house on the street that runs behind ours tonight.  It only comes to chest height on me, so checking it out is really easy.

Speaking of diving for freebies, we're only a couple of weeks away from our next junk set out period.  People are already starting to sneak their unwanted stuff to the curbs and alleys.  I don't know why they do it early, because the trash guys will not take it.  It seems to be something they do in this part of town, regardless.  I'm doing some spot checks, but nothing worthwhile yet.  It seems like it's mostly really broken down crap.

Back to the booth, the Derby Festival started on Saturday, so we're in for a couple of weeks of iffy sales, at best. I'm doing a 20% off sale on Derby Week to try and boost things a bit. We just got the ability to do sales in our booths, so I want to take advantage of it.  Mine will start this Saturday and run until Mother's Day, which is the day after Derby.

I won't be adding anything else to the booth (after today) until after the sale is over. I'm hoping it will give me more room to drag some more stuff in.

I guess that brings me around to my big, crazy news.  I'm getting another booth.  I figured out that if I really want to get serious about razing Mount Sorrow, then I need a way to get more stuff in the booth.  If I can get most of the large and small furniture that I have in storage out right now, plus all the tall shelves, then the unit would be half empty.  Seriously.  I'm only planning on keeping this extra booth until this stuff is off the Mountain and out the door to someone else's place.  I honestly don't want this new booth, but I want the mound of stuff even less.  It will also give me space to better display all this salvage stuff I keep dragging in.

This was a pretty junk-centric Ramble today, so let me break that up a little bit with some Monday Music.

What a good Monday ramble! I think getting another booth to move out stuff from Sorrow Mtn is a very good idea. No throwing yourself on the pyre my friend. I'm cleaning my spare room and it's never been this organized before. I'm going to sell the large daybed in there and get more shelves! Yay!
hugs
Linda

Special treat on Friday?! I'm looking forward to it! :)

You tease, you! I want my treat now - I have a sneaking suspicion I know what it is. I have always been a proponent of getting more booth space. Good luck sticking to the rule about only stuff from your stash going there. I am very strict about the rule until I find something I cannot resist and off to the "only stuff I have" booth it goes. Tomorrow is clean out the booths day. Unless I find something better to do. You must have a tetanus booster every ten years or less.

I did that once - got another booth just to clear out junk form a booth I dropped. Sold a ton and didn't have to donate it. Win Win. Lara and I are expanding our empire in the morning at our shared booth. We do well there all year round. My booth is tanking and I am afraid that I might have to close it or move it. Makes me sad. But, I need the $$$ and not the headaches of not selling. I have enjoyed your fun posts and look forward to more this week. COME ON Friday!

I like the windows, especially the small one. That's a size you don't often see. Good luck with the extra booth!