LO! THERE SHALL BE A RAMBLE! BUT IT SHALL BE ON TUESDAY! SOMETIMES THAT HAPPENS!

Buckle your seat belts, friends.  This is going to be a long and bumpy ride.  Remember to keep your hands inside the vehicle and stay seated at all times.  Proceed with caution.  There's rambling ahead!

The silly season is definitely not over.  Look for it to return sporadically throughout the weeks to come.  For some reason, I'm running into a lot of stuff that's just tickling my fancy of late and begging to be turned into weird little posts.  Of course, I am more than happy to oblige.  It's what I do.

I'm still working on the booth this week. (More on that later.)  I took a ton of pics of the spaces I finished last week, and only the one I shared on Friday was usable.  I'll try again this week.  That damned florescent lighting bouncing off the white tile floor washes everything out so much that it's really hard to get a good shot.

We had a new local commenter join the fun last week.  Welcome Alisa!   I love to hear from local folks.  I tried to send her a message, but she's a "no reply" person, so I thought I would answer her question here, since there may be others who want to know.

My booths are in the Clarksville Peddlers Mall, which is located in Clarksville, Indiana.  It's just off I-65, right by Greentree Mall.  All the details, including a Google map, are at this link.   Just ask at the front where my booths are and they can tell you.

So, I rode the bus with a celebrity the other day.

Either that or I watched an alien devour some poor woman's head and didn't realize it.

I've mentioned that I'm finding a lot of stuff in the contractor's dumpsters in the neighborhood right now.  The other day, I drug something home that convinced Keith that I had finally lost my mind. 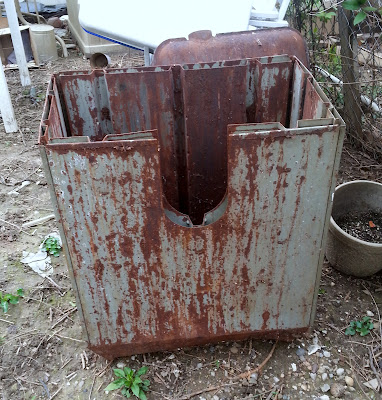 It's an old, rusty heating duct.  I liked the way it looks and the lines on it.  I can see it filled with dirt and some kind of flowering, trailing vine.  However, for the first time, Keith's skepticism about something is making me second guess myself.  Is this one just a bit too far out or not?  What would Donna do?

On the other hand, I have not a single doubt about the old boiler tank from the same house.  It's just plain cool. 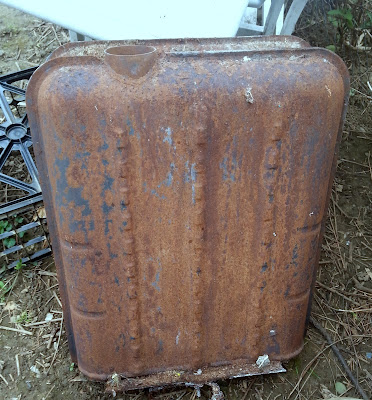 I also got a couple of rusty heating vents.  They remind me of the big floor vent in my grandmother's house.  It was between the living room and the kitchen, and we all used to stand on it to warm up in the winter.

Everything has decades of dust bunnies and pet hair in and on it, so it's all the yard, getting a good rinse from today's downpour. 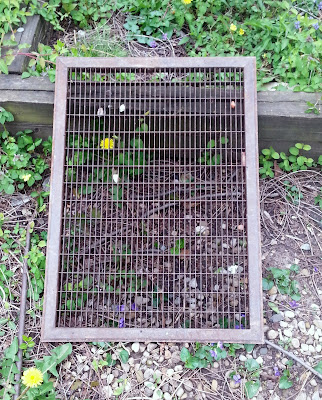 One of the dumpsters across the street got replaced by one that is way too tall to look into, much less reach stuff.  For the past couple of days, there's been this lacy thing barely visible over the edge.  For a while, I thought it was either a wedding dress or some sort of curtain.  Somehow it got shifted yesterday, and I was able to see legs. 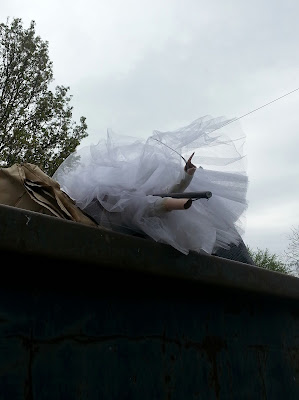 And a tuft of blonde hair. 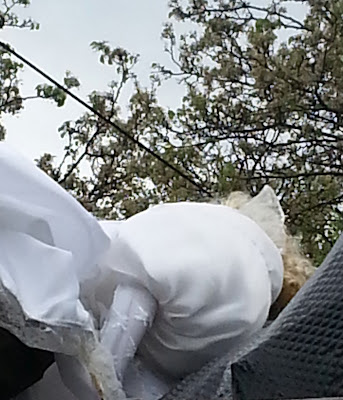 It's a big, freaking, scary-ass doll!  RUN AWAY!

Speaking of those dumpsters, they've been the scene of a tagging war recently.  Our neighborhood has been besieged by "2Buck" graffiti like this. 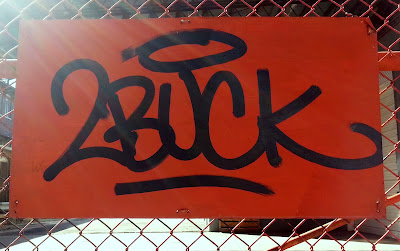 Turns out that 2Buck recently died, and his friends are paying tribute.  Well, a "2Buck" tag popped up on one of the dumpsters, and someone took issue. 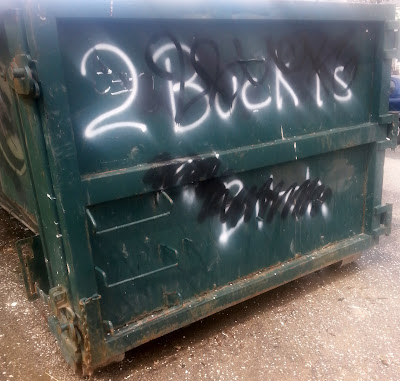 Someone else tried to eradicate it, but I think you can read the "2 Buck is my Bitch." line.  Cracked me up.  The funniest part is that this particular dumpster moved on from the neighborhood, because it was replaced by the larger one mentioned earlier.  A couple of days later, it popped back up in front of another house--right across the street from where it was before!

Keith sent me this article about "toxic" things you shouldn't buy at yard sales.  His comment was "You'd buy some of that."  Damn straight!  I dare anyone to walk up to a vintage Fiestaware collector and tell them it's not worth it!

A much better bit of reading is this nice piece from Adirondack Girl @ Heart about spatterware.  She frequently posts informative articles like this one.  Since I don't know a lot about ceramics and dishes, I appreciate them.

Speaking of yard sale finds, here are some of the things from yesterday's Mazda shot. We hit a major book sale (more on that tomorrow), a church sale, an estate sale, and two small sales. 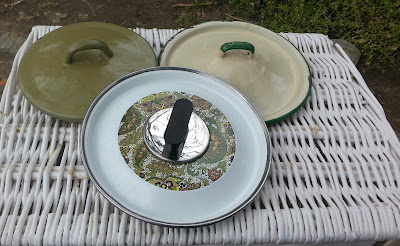 I always pick up lids when they're cheap.  It's easier to find the pots and pans than the lids, so having a few for sale can help a customer complete a set. 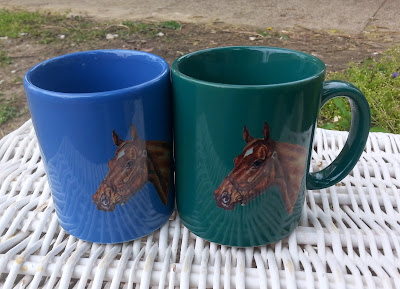 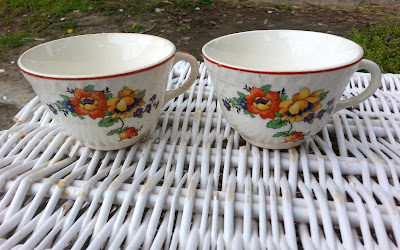 A pair of cups from a small box of Homer Loughlin dishes I bought.  There were only six or seven pieces left from the set, but I loved the sweet flower pattern.  Every piece has the chips and nicks of a lifetime of daily use.  In other words, character. 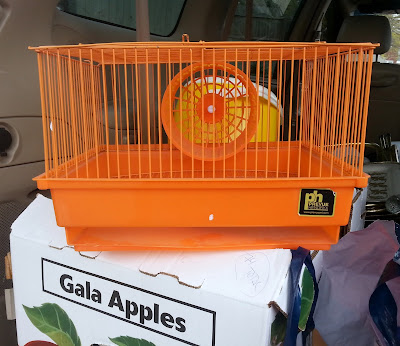 This hamster cage is not old, but I loved the color. 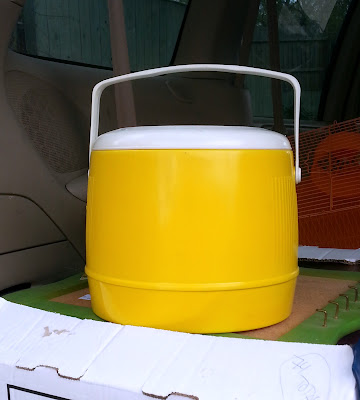 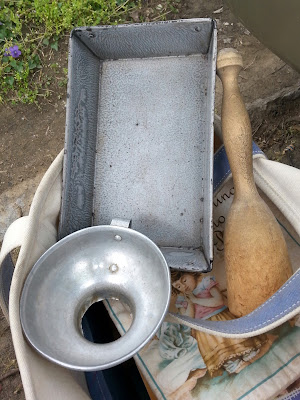 Assorted finds from an estate sale. 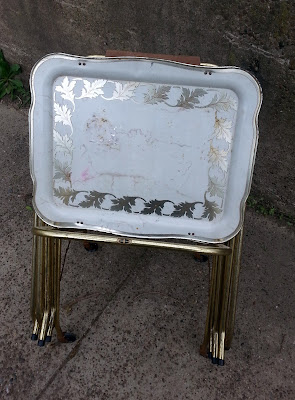 Vintage TV trays with rolling caddy.  The third of my four gold standard church sales was Saturday.  They always get praise from me for the large variety of stuff, their organization (they use several large rooms to display and organize their items), and wonderful prices.  This TV tray set was a dollar!

There is seriously stuff everywhere at this sale.  It starts outside the church on the patio, spreads across the yard, and over (and into) a small farmhouse that sits on their property.  On the inside, there's a large room of clothes, a special antique section, another large room of housewares and knick knacks and the like, and a hallway of books.  You'd be surprised what a difference it makes to have the clothes in a separate section  away from everything else. 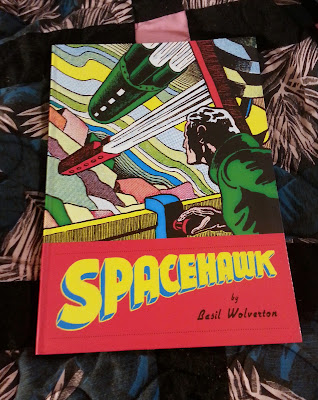 One of the small sales we went to was a continuation of the sale I went to during the last Big Flea.  They remembered me, but did not have anything new.  The other sale advertised that the husband was "reluctantly" selling his graphic novels.  That kind of phrasing tells me that the prices won't be anything I can work with for resale, but there might be something I might like for me.

I was really surprised at how close this guy's tastes were to mine.  His selection was fabulous and hos prices, while not practical for resale, were really good.  I ended up only getting the Basil Wolverton book above.  It was too early for me to spend all my money on me!

I adore Wolverton's work, which is classic, bizarre, and totally wonderful.  I am looking forward to spending an afternoon with this baby.  Now, I just need to find a reasonably priced copy of the collection of illustrations he did for the Bible.  I've been wanting that one for a while now.  Unfortunately, it's out of print and very pricey.

We also stopped at a new Goodwill by the church sale.  This big duck followed me home. 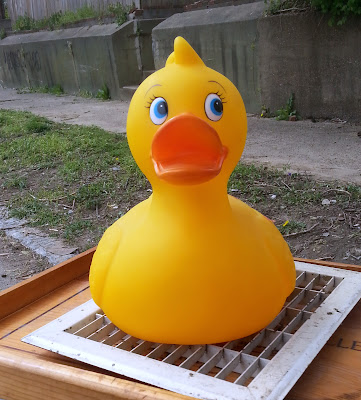 I also picked up a nice copy of the Quran.  I have to admit that, given the climate these days, I am a little nervous about selling it.  I'm actually afraid that someone will try to vandalize the book. 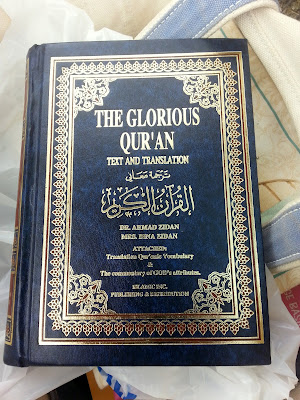 It's another busy week here.  I still have a massive ton of work to do on one of the booths, which is going to take a while.  Saturday is the first sidewalk sale of the year at the Peddlers Mall, so I also have to get ready for that.  I'm planning a HUGE blow out to clear off lots of booth shelves and make way for the run of stuff to some from Mt Sorrow.  Stop by for a visit or a bargain or two!

Everything that doesn't sell at the sidewalk sale is coming home for my yard sale, which is tentatively planned for the Saturday after Derby.  I'm planning on a having a huge sale to clean out the shed.

March ended as my very best month ever!  My highest sales total ever!  So far, April is continuing the trend.  Spring Break week didn't phase my sales, so we'll see what happens once Derby madness gets started.  We've just recently gained the ability to have percent off sales in our booths, so I am planning on doing that during Derby Week, just to boost things a bit.

I pulled the last two boxes of unpriced comics I have off the Mountain the other day.  I immediately had a volunteer to help me bag and price them.

Ignore the stack of canned goods.  One of our pantry cabinets collapsed and we haven't replaced it yet.  Of course, the comic boxes are sitting in the kitchen.  Don't you have boxes of comics in your kitchen?

Well, that's enough rambling for one post.  Have some music for a Tuesday.  Stay well, and I'll see you later!  Tomorrow we'll look at some of the book finds.

I wish I had some nearby dumpsters to dig through for items like you have been! I'd take some rusty old grates any day of the week!

I love the rusty stuff! The grate is really fab and I can see Donna planting something in the heating duct!! She is the Queen of rusty for sure. I would have pulled that big doll out of the trash! LOL, so that is how crazy I am! Not much junkin here lately but with summer coming I might have to take a road trip with some fun stops at Antique and Flea Market Malls! Keep on being crazy my friend.
hugs,
Linda

And the Lord saith Let there be rust!!!! This Donna would have that rusty duct by the pool with lime and purple potato vine, spiky purple grass, bronze begonias and some Blue Daze. Love the grate - lay flat on the ground to plant thyme or to control mint. I would have grabbed the freaky doll for Halloween. I got to go tell Linda to take me on her road trip. In the video, did they marry each other or other people then she died?

I know that is rust on the old ductwork, but it kinda looks like something from an old Hammer film....blood. Therefore it will sell immediately. The Homer Laughlin dishes are more my style. They sure had some pretty patterns; I hadn't seen this one before.

It's probably because you're blue. A naked duck, indeed!