Absolutely nothing to ramble about.  I spent yet another week (third in a row!) on the great booth overhaul and redo.  I'm still slogging on and the task is still never ending.  Surprisingly, it doesn't seem to be hindering sales, which are pretty strong.  This weekend was a bit of a dip, but I'll have more on that later.

Maybe we should have some fortune cookie wisdom before we move on.

Since it's the booth on my mind and in my time so much right now, let's do a tour of what I have done.  I'll go ahead and admit that these shots are all shitty.  I blame the lights at the mall.  Those glowing beams you see at the tops of some pics are not the Junk Gods showering my endeavors with their blessings, but glare from the lights.  Still, some of you are really wanting to see the spaces, and I don't think the pics are going to get any better.  Sorry about that. 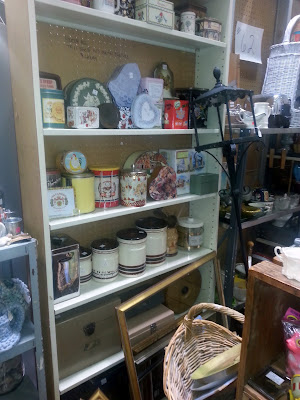 We'll start with a new feature:  The Incredible Wall of Canisters and Containers!  I've been selling so many of these at the moment, I decided to group them together for a while. 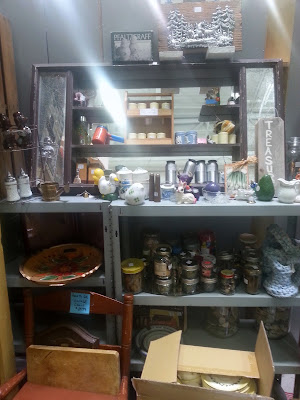 Salt and pepper shakers, miniatures, tiny ceramics and pottery reside on this mirrored curio shelf.  You can also see my Things in Jars shelf.  Nothing sells junk like putting it in a jar!  I am contemplating swapping this stuff out with my vintage Christmas stuff, which is not working on the shelf where it lives at the moment.  (Hence no pic.) 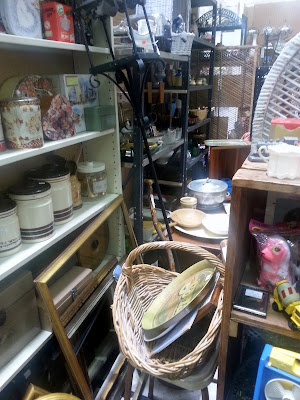 I finally decided to make a barricade at the end of the shelf on the right to stop folks wandering through the tiny gap and making messes.  I wanted a junk blockade, rather than another shelf, because I wanted to keep it feeling a little open. 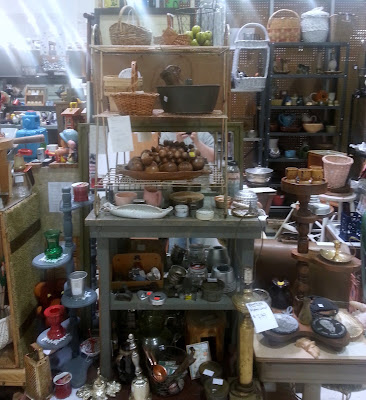 Here's the frontward aisle-facing display.  I spent a day and half working on it.  This is the spot where that wonderful, primitive cabinet sat, and it sold weeks ago!  I just shoved some crap there and put off actually making a new display, because I was totally bereft of ideas.  (Doesn't sound so dramatic?  I was bereft, I tell you!  Bereft!) 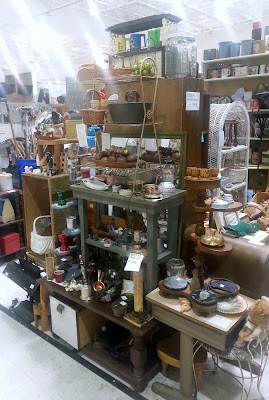 I think you can make it out as a unit a little better in this sidelong shot.  (Isn't my vocab getting fancy this time around?  First "bereft" and now "sidelong."  I just need to find a way to work "bodice" into this post and I'll be too fancy for my pantsies.  Or something like that.)

Another vendor, who is also a friend and extremely talented when it comes to staging and styling, complimented me so nicely on this one.  He actually told me that he had learned how to work better with smalls by looking at what I do.  I was totally floored, since I'm totally convinced that I have no talent for this sort of thing whatsoever.  All I know how to do is keep cramming stuff everywhere there's an empty spot. 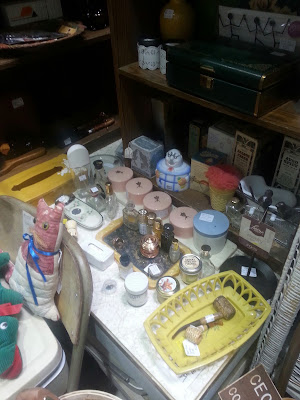 My ode to dressing tables and vanities.  Anything that might be found on a lady's or gentleman's  grooming spot is here--Avon decanters, perfume bottles, watches, jewelry, even corn cob pipes.  It goes all the way the up those shelves you see here. 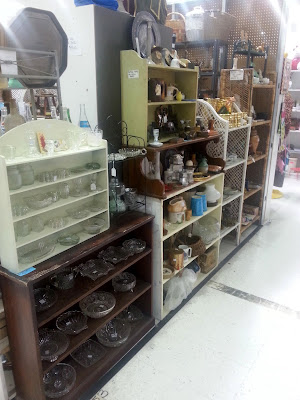 Aisle side view.  My Asian section is at the very end on the wicker shelves.  In the middle is my Americana section.  The light green shelf in the foreground of this shot just sold, which means that I am on the hunt for another small shelf.  Sigh! 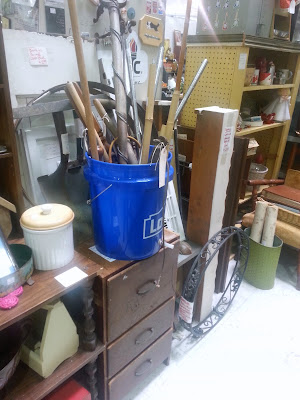 My new Salvage section.  I've been finding and moving so much of this lately, that I thought it would be good to go ahead and make it a new section.  I want to put up a sign calling this "The Salvage Land" but only the comic nerds would get the joke.  And they never come into this booth. 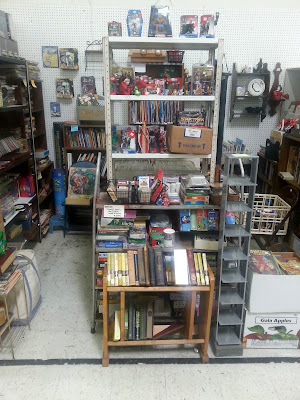 They spend their time in this booth!  Ignore the boxes blocking the way on the right side.  I took care of them the day after this pic was taken. 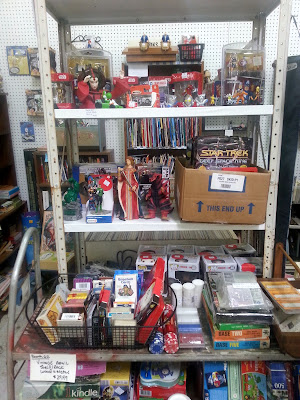 I added this shelf to the top of the end of the comic box table.  (Got that?)  It enabled me to move the nerd toys out to the aisle and has boosted those sales.

That's two booths down and one to go.


Uhm, the tour for that one is going to have to wait a while.

I'm going to try and whip a little bit of organization into this one today.  I have treatment tomorrow and really want to take this week off from the booth and rest.

The sidewalk sale was practically a bust.  I only made about 35 bucks and didn't sell very much.  I'm bringing a lot of the stuff home to put in my own yard sale.  Some of it went into a Free Cart at the sale, which took it away and made me happy.

It was a slow day overall.  I think we fell victim to the start of the nice weekends.  It didn't rain this weekend and I think yard work won out over the Peddlers Mall.  Sales were down in the mall too.  This was the first weekend in forever that I didn't break a hundred in sales on either day.

That's about all for this week's Ramble.  Have some music for your Monday.

So when you post pics of your booth, I like to make them REALLYLARGE and shop! I saw many items I would be picking up. That is always fun for me since I also don't spend any money this way. Ha!! The booth looks great, you have such a great variety of items. Take care.
hugs,
Linda

Salvage Salvation is what I call mine. I would really love to plunder those booths. We are not allowed to leave boxes of things in our booths because customers may get hurt. I do have a storage area I can shove them in, but I find I never go back to dig the stuff out. I am planning a canister section to downsize the hundred I have in the kitchen. It is time they go live somewhere else.

Next time I'm down in Clarksville I will be pillaging through your booths. So many things I would buy! :)