First off, I'd like to thank everyone for hanging with this blog through the silly season of this past week.  I'll go ahead and warn you that there will be some more of the same coming up in the weeks to come, but hopefully not as constant.  There's something wrong with my head in that I kind of like doing that sort of stuff, but it also buys me some time to get some longer pieces written (or, as in the case of this week, work the booth every day).  It's not easy being me, but, apparently. someone has to do it.

We interrupt this update to being you a picture of a cute blue birdhouse. 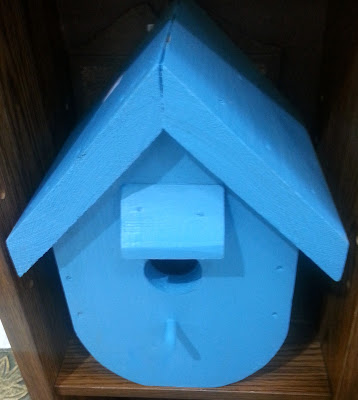 That little "thank you" you're hearing right now is coming from your soul.

Sunday, in the Mazda post, I promised cuteness and awesomeness in the Monday Rambles post, but there was no post on Monday.  (Boo, me!)  Let me make up for the lapse now.  Also, let me assure you that there will be a Ramble this coming Monday.  I'm not sharing everything in this update to make sure it happens.  Sneaky me.

Anyway, as to cuteness and awesomeness, prepare to be blown away.  I hereby present:


KAIJU AND SENTAI  (AND MECHA) 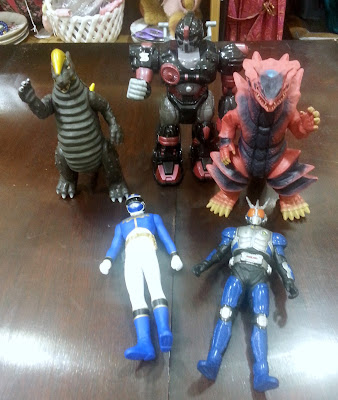 There was a lot more of each, but I think you get the idea.  The most unique church sale in town happened last week.  It's not one of my gold standards, but it is one of my favorites.  One of the churches in town also sponsors a Japanese church, and that Japanese church has a fund-raiser sale every year.  It's a really fun event, complete with food, music and cultural demonstrations.  Also, great stuff for sale at great prices.

It can be a really good source for manga and anime, both untranslated and translated, which is one of the reasons I like to go.  Another is the availability of really cool imported toys (like the above) at not imported prices.  It was well worth going.

I've been doing more diving into the renovation dumpsters up and down the street. Well, except for the one that is too tall to get into.  I mentioned this mirror before, but I wanted to share a pic after I got it cleaned up.  It's a beauty. 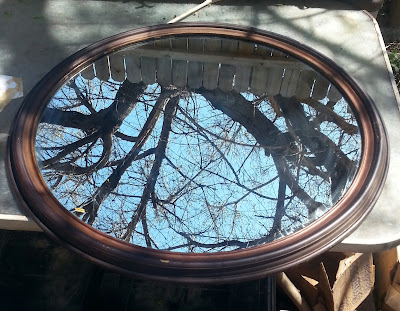 I found these counterweights at the same house on the way to the bus yesterday.  I also seem to have a knack for finding awkward heavy things when I am on the way to catch the bus.  All I had to try and carry them in was a plastic leopard print bag.  If you can't be practical, be fabulous! 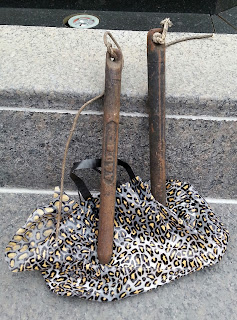 As I mentioned above, I have been working pretty much non-stop for the past week re-doing the booths.  After seven days, four of which were entire days, I am still not done.  I needed a break, however, so I stayed home today.

Here's a preview.  More pics to come when I'm done.  In the back on the right, you can see the new Wall of Canisters that I created!  It's been an exhausting week, but I've had some interesting meetings with some of my regular customers.  I'll write more about that on Monday. 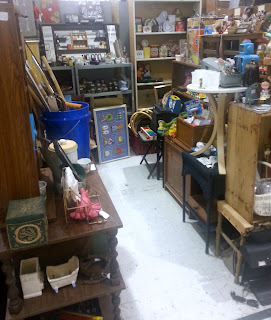 A little girl of about eight or nine pointed to this Raggedy Ann doll and yelled:  "Hey Mom!  Look at this clown!"  What are they teaching kids these days? 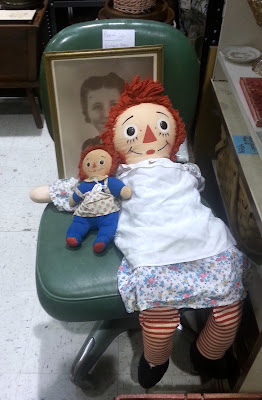 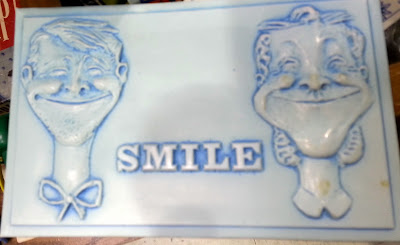 Email ThisBlogThis!Share to TwitterShare to FacebookShare to Pinterest
Labels: awesome things that are awesome, catching up, curb-diving, cute things that are cute, junk, pics, the booths, updates

What????? A clown?? Raggedy Ann I'm so sorry! Enjoyed your fun post and glad to see you getting things bought and in the booth.
hugs,
Linda

What disrespect for RA! Kids today have no manners. Will the blue bird of happiness be living in the blue house? How in the world did you carry those counterweights on the bus? I used to paint them to sell. They make great Santa's. Looking forward to the Ramble - better not disappoint.

You do find some good and unique stuff too. Always like your shares. Love seeing your booths, aways. Hugs.
Joy

I live in Louisville, Ky. Always love reading your blog. Where is your both located? Are the above Power Rangers for Sale? I've seen you at the Flea Market and a few yard sale. Always to chicken to say hello.