To Ramble or Not to Ramble?

On a Tuesday, that is.  I'm getting closer to Monday!  Still no cigar though.  Oh well, I don't smoke anyway.

We ended last week in the 60's, then came into the 30's this week.  Winter in Kentucky.  Ain't nothing like it.  At one point, they were calling for snow for this week, but not any more.  Good.  We already had one good, lasting snow this winter, and that's enough for me.

So, I was wandering through the Peddlers Mall the other day, when I caught something out of the corner of my eye.  I turned my head and found myself face-to-face with this: 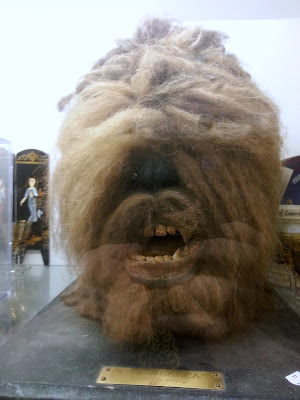 There, in a showcase across from my booth, is a Wookie head!  I can just imagine the Emperor Palpatine sitting on a throne somewhere calling out:  "BRING ME THE HEAD OF CHEWBACCA THE  WOOKIE!"

According to the price tag, this was part of a limited run of 5,000, because, I guess, there aren't that many Star Wars fans who are into decapitation.  Also, Wookies have bad dental hygiene.

AND NOW IT'S QUESTION TIME! 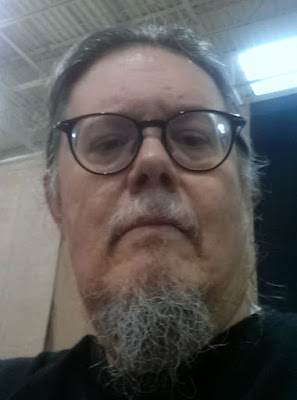 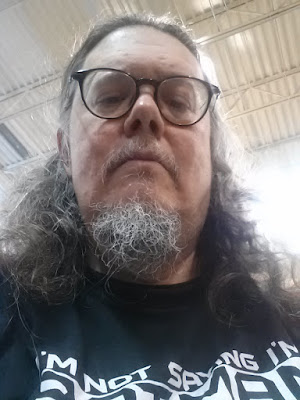 I always seem to be frownie in my selfies.  I think it's because I'm concentrating so much on making sure all my hair is in the picture.

Also, hair up or down?  Vote in the comments.

It never fails.  Every time I mention that sales are going strong in the blog, it seems like they immediately slow down.  Wednesday and Thursday last week were just "meh."  But Friday and Saturday were great.  I straightened out my showcases the other day and have sold something out of them every day since.

Friday was also a big furniture day.  I even sold one of my shelves, which meant rearranging that booth to make room for a new shelf, which was a little larger than the one that sold.  That started on Saturday and has led to a total booth redo that is still going on.  I'm in the midst of redoing all my spaces, but this particular one was low on the list.  Now, it's taken over!  It's looking good, though.

Okay.  That's enough rambling.  It's treatment day, so I need to find clean socks and scoot out of here. Enjoy this bit from OMD, which combines two things I love:  80's synth-pop and stories of the saints.

I must say I like the hair up. Glad sales are continuing and hope they get better. Treatment day, Yay?? You are one tough cookie! Just keep ramblin!

Up for business, down for relaxing. Don't take this seriously Eddie. Be you. Hugs.
Joy

You can rock your hair both ways! Just keep it long. I love the hippie vibes :)