This one is an important one, as far as booth reports go.  It's the first one since I expanded, so I'm hoping it will give me some indication whether I bit off more than I can chew or made a smart decision.  Unfortunately, the signals are a little mixed.  It's probably going to be two or three months before I can really tell if the increased space is really making a difference for me.

Saleswise, I was up about a hundred dollars over January.  Being up is good, but that's not that much of an increase.  Still, the extra money on my check is nice.  However, I'm wanting this expansion to move me from the high 3 digit sales into the 4 digit range, and I've still got a bit if a ways to go before that happens.

My daily average for the month was 31.28, which is about six bucks higher than January.  That's a nice amount of growth, which I hope to be able to maintain,  I'd like to raise my target average up from its current 25 dollars.  A couple more months like this will help me do that with some confidence.

As far as the charts go: 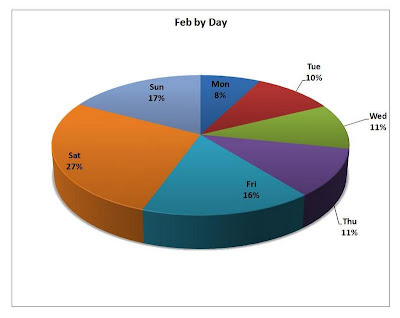 The big hunk of sales still happened on the weekend, but not as big a hunk as January.  I'm not so comfortable with 75% of my sales coming from weekends.  It just feels out of whack to me.  Too many of my eggs in one basket, I guess.  This is a lot more realistic arrangement, as far as I'm concerned.
Mondays slipped back a little in the picture, too.  I guess that last month was a fluke and Monday really is a slow day after all.  Sure would like to be able to change that, but don't quite know how.  It's a bummer to come off a good weekend into a less-than-spectacular Monday. 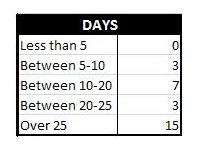 Now, I was really pleased with this breakdown.  I had no days with less than five bucks in sales.  That's great.  Very low dollar days drag everything down, including my mood.  Their effect on the daily average is enormous.  It can take 3-4 really strong days to bring the average back up after a very low day.  Unfortunately, I had those 5-10 and 10-20 days, which didn't make me really happy.  Most of the 10-20's were on the high end (19-ish), so I can live with that.  But those 5-10's can mess you up as much as the under five's do.  What's a real bummer about February, is that most of those low end days hit at the end of the month.  There was no time to overcome them with higher days on down the line, because there was o down the line.  I hate short months.
I was really psyched that I had fifteen days over my daily average target!  That was nearly twice what I had in January.  I hope to keep pushing that number up and some of those low numbers down.  We'll see.
Another thing I added to my sheet was a calculation to tell me when the rent gets made.  That's an important thing to know, because that's when I stop selling for the mall and start selling for me.  Even with the increased rent, I made my rent a week earlier in February than I did in January.
So, anyway, I'm pleased with everything, just not as pleased as I'd hoped to be.  I've still got  a lotta work to do to get where I wanna be.  The indicators are pretty positive that I am on the right track, though.
Posted by EM at 3/08/2011 05:00:00 AM

Email ThisBlogThis!Share to TwitterShare to FacebookShare to Pinterest
Labels: book report, the booth

one of the reasons my father failed in so many businesses is not his lack of charisma, it was his lack of analysis.