Of Rascals and Raccoons! 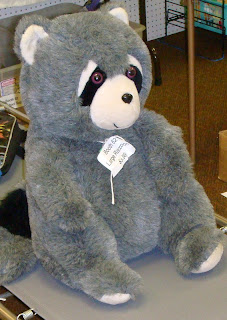 You might not recognize him without his jaunty, festive headgear. 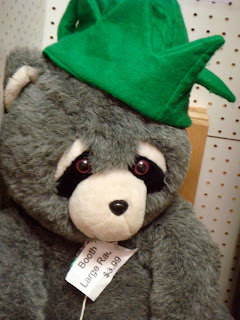 I tried to always have a hat for him, but couldn't find enough hats.  They kept selling.  He was wearing a coonskin cap for a while, but most customers in my mall don't have much of a sense of irony.

Anyway, last week, when I got to the booth for my regular restock/revive/renew session with the space, I found him sitting in the floor.  That in itself is not unusual.  People take things off shelves all the time and never put them back.  Tidying up after customers is an important part of the weekly visit, just as important as the restock in my opinion.  Too many weeks go by without a clean-up, and customers aren't able to walk in your space, much less shop there.

Finding him the floor is a lot easier than finding him gone.  He's made dozens of trips outside of the booth, sometimes for a day or two, but always seemed to make his way back.  This is not unusual, either.  People are used to shopping in stores where they can leave something they decide they don't want just anywhere and someone will come along and put it back where it belongs.

In a flea market mall, however, it doesn't work that way.  It's up to us as vendors to keep our booth spaces clear of items that are not ours.  Some vendors are better at this than others.  This means that in order to get an item back you either have to wait for it to be returned, or else walk the mall looking for it.  I try to do a walk through at least once a month, but it takes time.   I've actually had items sell before they ever return to the booth!

The first couple of times the raccoon wasn't in the booth, I got excited that he had sold.  However, an item ain't sold until it shows up on your sales report.  So, eventually, I'd come in, find him gone, sigh a little, and wait for him to come home.  It's a part of the life of a junker.

So, finding him in the floor the other day, really wasn't that much of a surprise.  What was surprising was that he wasn't alone.  I wish I had a pic, but I didn't have my camera.  I need to start taking it to the booth with me more often, I guess.  Anyway, he was sitting in the floor with an almost identical raccoon.  That is, if by "almost identical", you mean "a little smaller and a little lighter in color, but definitely of higher quality."  They actually looked so cute sitting side by side.

At that point, I was guessing that someone had picked up the newcomer from another booth, then saw mine and was comparing them to see which one to buy, but for some reason had changed their mind.  Either that, or a couple of kids had been playing around.  Either one of those scenarios was plausible, because they both happen all the time.

I picked up the friend and put him the the cart I had grabbed to use to collect returns from my booth.  Then, I picked up my guy and got ready to put him on the shelf.  At the point, I noticed that his price tag, which is tied around his neck, was pulled up over his nose in the front.  It looked exactly like someone was trying to take it off! I picked the other guy up out of the cart and checked him over closely.  He had no tag that I could find.  That confirmed it.  Someone was trying to pull a tag switch!

Imagine!  My cute, big old dude was being used as an accessory to a crime!  I would have gotten credit for the sale, and someone would have walked off with a more expensive raccoon, paying only my price for it.  My poor little guy!  I looked at him again and realized that he was truly traumatized by the event.  It was in his eyes.  They weren't all happy and frisky like they usually are.  They seemed cold and distant, somehow.  I made a note to look up a support group for stuffed raccoons who have been forced into lives of crime, readjusted his tag, and put him back on the shelf.

I looked all over the booth, but never found the other tag.  So I took the other guy to the return counter, told the manager what happened and went back to work.  There really wasn't anything else anyone could do.  The sad part is that without a tag, the other raccoon will go into the untagged room.  Lots of vendors don't bother to check for their untagged stuff (I do), so it's possible that someone has lost a nice piece of merch, even without the shoplifting.

So why did the scheme not work?  Well, there's no way to know, but most likely, either the perpetrator got interrupted making the switch, or else getting my tag off proved to be harder than they thought.  Either way, it's a moot point now.  My guy showed up on my sales report over the weekend, which means he's gone.  At least, I think he's gone now.

Email ThisBlogThis!Share to TwitterShare to FacebookShare to Pinterest
Labels: big raccoon, the booth

No, Eddie,
This was not a crime in the making.
YOUR raccoon is a female raccoon, and she had just given birth to her baby. . .Sheesh, haven't you heard the story about the birds and the bees?

I'm not buying it, Kathleen. A baby the same size as she is? I should think that would be awfully rough on a poor raccoon. At any rate, the kid could have had the decency to be born with one of my tags on, you know? :)