Cancer is helping me to understand drug abuse.  Not condoning, mind you, but I can better understand the appeal of certain substances, now that I've had to take them for a while.  Take pain meds, for example.  Percocet was a godsend after the surgery!  It was so nice not to be in pain and to be able to sleep well.  I can understand the draw it has for people now, except that  I simply cannot imagine living in that kind of fog all the time.

Another example is steroids.  I had so much energy all last week while I was on them!  I felt like I did before the surgery.  I could get things done.  I didn't need to sit or take rest breaks.  It was awesome.  I also ate uncontrollably.  It's kind of a drag to go back into the land of fatigue and healing, but I know my body needs it.  I'm just glad I was able to get some things done that I had not been able to work on.  Hopefully, that'll at least give me a little bit of a leg up for a few weeks.

One of the things I did was schedule some video posts for the next few weekends, so that I could at least have some content, even if it's low content.  I got some other things outlined, so maybe it won't take too much to get them finished.

I got a little thrifting in this past week.  Still no special or fabulous finds, but I kind of got tickled over these.  Sometimes, I can't help myself.

Same with weekend yard sales.  A couple of waaaaaay over-priced estate sales and a garage sale.  I did score a couple of cool religious pics, but the one I really, really wanted at the sale was $25!  Because it had a light!  That was so off-kilter, because everything else was a buck or less.  Go fig.

Sales are very strong this month for both locations.  I'm kind of back in that old situation of now having furniture at YesterNook and playing the waiting game for it to sell, which I never really like.  Stuff just needs to go as soon as I put it out, you know?  That should be a rule.  Who do I write about that?

At Peddler's Mall, I'm already at last month's total, with half a month left to go.  Nice.  The new space finally has a flow to it and stuff is moving.  I had an 80 dollar day in the middle of the week (!) last week when someone cleaned out a bunch of my religious articles.  Need to do that more often, let me tell ya!

Problem is, I'm about to run out of stuff!  My new space takes a lot more merch to restock.  My winter stash is just about gone.  It's too early in the season for a huge haul from that yard sales.  My recuperation has kept me out of the thrifts for the first part of the year.

I've got a bit of a backlog of stuff for YesterNook, but I don't really want to take it to the other booth.  I kind of select stuff that's the best fit for each destination.  I might have to sort through some of it and pull some stuff, if I don't have a super-score pretty quick.  I think I might have a box or two of stuff in the shed, but it won't be much.  Oh, the perils of re-selling!  Feast or famine, let me tell you!

On the other hand, sometimes it's the odd things that make it all worthwhile.  There's a restaurant down the street from us that also sells flea market finds, but at outrageous prices.  Sometimes, I run into one of the owners at a yard sale, then it becomes a rush to grab the good stuff first, because she has deeper pockets and a bigger vehicle than me.

Anyway, from time to time they just set stuff out on the curb by their back door.  I think it's probably stuff they've gotten in either box lots or buy-outs that they don't want to sell for various reasons.  I've made some good finds there in the past, including a some old Masonic books, an old Hebrew Bible, and a director's chair.

So last week, we were heading home and there were some small things set out on the curb.  I always have to check things out, so we stopped.  I picked up this small display rack, kind of like they use to hang ties on or maybe jewelry.  This is kind of like what I'm talking about: 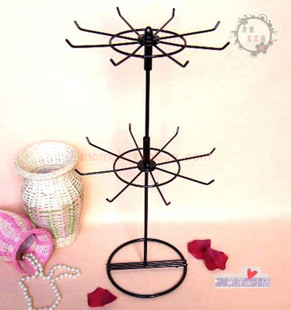 The one I found was made out of wood and had a little more of a masculine vibe to it, so I really do think it was for ties.  It was tabletop size, and I thought it would be a great display piece for the booth.  I sell a lot of rosaries and religious medals and trinkets, and it was the right size to make a perfect display for me!

Well, on my next trip to the booth, I forgot to take it in, so it was still in the car on Friday.  Keith told me that one of his co-workers had seen it in the car and asked if he would sell it.  She liked it for her own jewelry.  He had told her that it wasn't for sale, because I was going to use it, but I gave him a price to give her.  I didn't think she'd go for it, because it was missing a couple of prongs, but she took it!  He was kind of surprised that I would sell it, but I told him that I could always find something like it to use, if I needed to, but that a sale is something you should never pass up. That's your Booth 101 lesson for today.

It's kind of a busy week for me.  I have two doctor's appointments on top of everything else.  Cancer sure increases the number of your doctors and appointments.  I'm going to try to get some stuff finished and scheduled.  I have a couple of posts that are near completion, so I'm hoping to polish them off.  if not, I have a couple of special videos posted for the weekend.