Some of the stuff I read about my chemo drug, DTIC, indicated that the effects would be at their most intense about three or so weeks after the infusion.  Well, that was last week, and I was definitely feeling it!  It's also pretty obvious that I'm not on steroids any more.  In other words, my sizable ass is dragging!  I cannot imagine being any more tired than this, but I am sure that it is possible.

Tuesday, I woke up at about 9-ish and at about 9:05-ish felt like I was ready to call it a day.  My get up and go definitely got up and went.  Wednesday was about the same.  I came home from work and was in bed by 5.  I didn't wake up until 7 on Thursday.  Thursday was a good day, and Friday was for about half the day, until I crashed and burned at 2:30 for a three hour nap.

I think it's going to be good days and bad days from here on out.  I think I've figured out that I need to limit myself to the essentials on the bad days and rest as much as I can, then work the good days for all they're worth.

I get my next chemo treatment next Tuesday.  Hopefully, I'll still be able to have some good days with two rounds in me.

Sales last week just about dried up for a few days, after being awesome all month.  I hate to lose momentum like that.  Bummer.  They did pick up towards the end of the week.  Hopefully I can still bounce back some more  I am still ahead of last month at both spots.

We hit a few estate sales on Saturday, plus one church sale.  The church sale was pretty unremarkable, but the estate sales were fun.  One was so crowded that I almost gave up.  The people giving the sale said the house had been closed up for three years!  There was tons of stuff, and the prices were pretty good.  The basement was mainly unpriced.  As I was coming down there, a man was buying three small 48 star flags for a dollar each!  Ack!  I died.

At another sale, I watched a guy take the lid off a sewing kit, set it aside, and proceed to pull the best stuff out of it.  He walked out of the closet with two old tins of buttons and some old darning tools, leaving the rest behind.  I poked my head in once he left and saw that the lid he removed was priced.  In other words, he was cherry-picking something that had a lot price.  This is what is known in the business as an "asshole move."

In the basement of the house, I ran into him again.  I was looking at a bunch of tools when he came in the room, so I grabbed the level and walked away.  Keith was like, "That's what you are getting?"  I told him:  "I don't want him to get it."  So, I carried it with me until he left the area.  Then, I decided I really liked it, so I bought it!

I waited around until the guy checked out, because I wanted to see what would happen.  I was also fully prepared to narc on the guy.  Crap like this makes it harder for honest dealers and collectors to get things at fair prices.  Seriously, the whole sewing box was only six bucks, which was an excellent price.  Fortunately, the people running the sale recognized the stuff and told him that it was an all or nothing deal for the kit.  He tried to protest that he "hadn't seen the price because the lid was sitting to one side."  (Yeah, because he put it there.)  Then he tried the "But I don't want this other stuff" line.  The sale runners told him it was all or nothing and he could donate or re-sell what he didn't want.

After he left, I finished my shopping.  When I was checking out, I told the folks running the show what I had seen.  They were really annoyed at the whole deal, especially because the overall price was so good.  Hell, I've bought lots of box lots just to get one or two really good items.  It's part of the game!

That last sale, by the way, was super cool.  The basement of the place had been converted into a replica of a Mexican cantina. 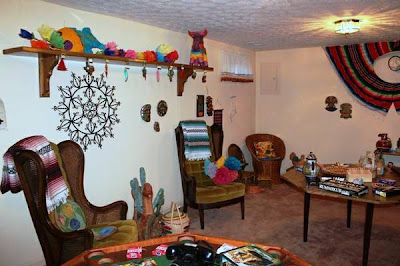 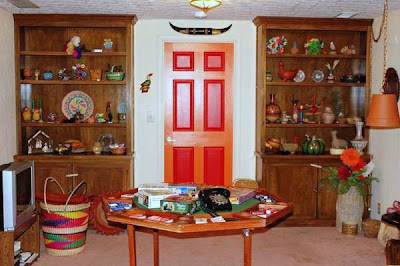 I'm going to be doing a post later in the week with some pics of my finds.  Most of them went right to a booth, so I've got to go back and get pics when I go to straighten up.  (I forgot when I was putting everything out.)  I got a couple of really fab things.