Sometimes, I miss out on a cool find, but it ends up at home anyway.  Keith typically goes yard saling with me, although he doesn't check out every sale on my list.  Still, he buys his fair share of stuff.

I have to kind of keep an eye on him, because he'll dredge up some purely awful stuff sometimes and be convinced he has to have it.  (Nose hair trimmer, anyone?)  Then, it will sit around in a box or bag for about six months, until he finally gets around to putting things away.  At this point, he'll look at it, say "What was I thinking?" and hand it off to me to put in a booth!  Problem is, I don't want to sell nose hair trimmers!

In fairness, he does sometimes find some killer item that I have passed by and bring it to my attention.  Usually, though, I have to divide my time between watching him and, well, working.

He unpacked one of his boxes recently, and made me totally jealous in the process.  This awesome thing is now overlooking the computer desk where I type these words. 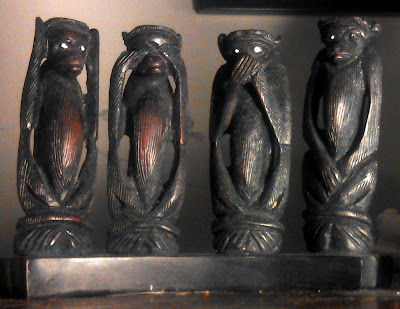 Take a real close look.  Aren't there traditionally only three monkeys?  Who's that guy on the end?

And what's he keeping from performing evil deeds? 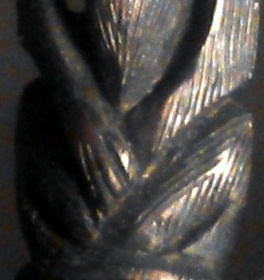