Happy Labor Day!  Just kind of kicking back today.  Actually, I'll be sort of kicking back all week, since I'm off.  Budget cuts run down hill, and, thanks to sequester, our program has about a $300,000 cut to absorb for this year.  As a result, the center where I work has to close this week.  I know the reality is that I'm being furloughed without pay, but it honestly feels kind of like this:

(A couple of things that kind of tickle me about that video:  Gina mouthing the beat counts while she's drumming and the totally stoned look on Belinda's face when they're doing the water ski bits.)

It wasn't a planned time off, but it's really welcome.  I have needed a few days to catch up, rest, and breathe since June.  I always tried to take minimal time off through the chemo, even going in some days when I really shouldn't have.  (One time they sent me home.)  Those last months it was pretty obvious that I was putting the minimum effort I had to into things, because that was all I had to give.

Even though, I'm feeling a lot better now, there's still just a little lag in me that's calling out for a few days of not having to report anywhere or meet any expectations.  I know I'm not getting paid, but this week is a godsend for me.

I'm not totally off either.  My night sessions will still take place on Tuesday and Thursday, but going in at 5 for a couple of hours on those days still gives me a major break the rest of the week.

I'm planning to spend the week resting, of course.  I'll do some reading and a little housework.  Now that I am feeling better, it's time to take some of my responsibilities back from Keith's shoulders.  He's done a great job handling the load since January, but he can't do it alone.  I'm also going to get the blog back on schedule.  My hiatus messed up my scheduling, and I'm still getting that straightened out.

Of course, there will be some booth work.  It's time to get some Halloween and harvest items out.  I'll also try to squeeze in a little thrifting along the way. 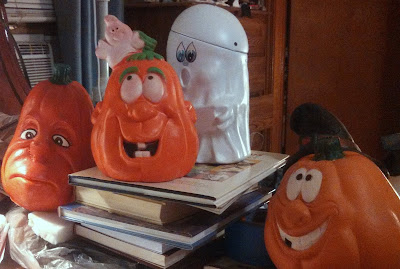 These guys will be the first to go to the booth.  I was pricing them last night.  The foam pumpkins are from the 80's and I think they're super fun.  I got them over the weekend.  There's a foam witch head too, but you can't see her.  She's behind the pumpkin on the right.

It was too hot to do any yard sales over the weekend (and they're really weren't any listed worth going to), so we went to the big flea market instead.  The Labor Day show is when they have the special antique wing, and there's always some bargains there in amongst the big ticket stuff.  I didn't get too much, and part of what I did get is actually stuff for me or for the house, but I did make a killer comic score.  (More on that in a later post.)

Mainly, the trip was about seeing the interesting stuff. 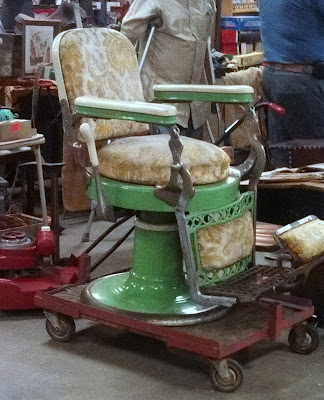 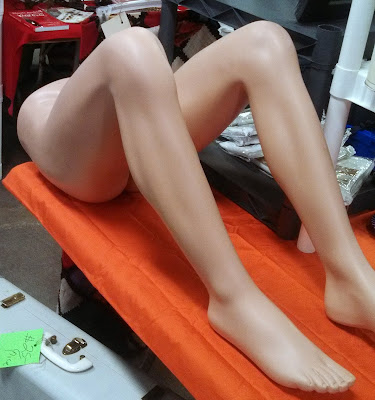 Apparently, it was lady legs day at the flea market!

As a rule, I don't like things that are faux-aged or distressed.  But I did like this guy's large metal letters and stuff.  I loved that he used the typographic symbols! 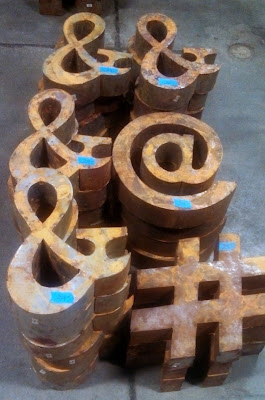 I got one of these big foam fingers for my brother, because he's such a Miley Cyrus fan  he's a big University of Kentucky fan.  Since he lives in Tennessee, I always get him something UK-themed for Christmas. 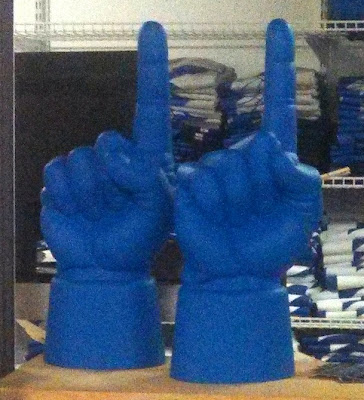 It's kind of interesting that there wasn't a University of Louisville fan merch booth there, as well.

Among the other things I intend to do this week is get some of my recent finds photographed and posted, plus lots of pricing and packing things.  I'm way behind on that.  My junk room is a disaster right now.

Vacation!  All I ever wanted!

That Miley Cyrus comment made me choke on my tuna sandwich. You are funny!

Those legs - are those a mannequin from a clothing store or some sort of OB/GYN model. Holey moley!

I found great yard sales the last few days though a Facebook group.

Love the pumpkins, too, although I probably wouldn't get them myself unless they were also utilitarian (e.g. cookie jars.)