Vacation!
Nice, but it's over!
It's Monday!
Have to go back to work!

Oh well, it was nice while it lasted.  Guess I got a little too involved in the "rest" side of the "rest and relaxation" thing.

I did, however, nap.  A lot.  I got some good, much-needed rest.  I'm starting to feel much more energetic and much, much better.  Almost normal, in fact.

It's going to be a challenging week at work.  Our session ends this week, and the week off isn't going to help anybody when test time comes.  Just have to make the best of it, I guess.

I did get a little thrifting in last week.  My uncle and I got together twice and hit the shops.  I didn't find too much, but it was good to see him again.  We went to one place I had been wanting to hit for while, but for some reason had not.  It ended up being a bust, so the place is on my "visit once a year" list now.  At least now I know.

Yard sales were really good this weekend.  You've already seen my new friend.  If not, scroll down.  I also made a killer Ficher-Price score that I will write more about later.

I spent yesterday at the Peddlers Mall working on the booth.  My sales have drifted down to almost nothing.  My check last month was pitiful.  August is usually a bad month, but not that bad.  I know part of it goes back to the effort that I wasn't able to put into the space for months.  During chemo, I was doing only what had to be done, and that was usually just putting new stuff out and picking stuff up off the floor.  I just didn't have anything else in me.

I just now feel like I'm able to really take advantage of the larger space I have.  Expanding when I did (right after my surgery) wasn't the wisest move, but it was a chance I had been waiting for.  If I had let it pass, I would have had to wait a long time for that one corner to open up again.

The problem is, I can't support this space on smalls alone.  At least, not the nick nacky kinds of things that have always been my stock in trade.  I need more medium-sized items and small furniture.  I also need to spend more time there, now that I am able to.  One afternoon a week  just won't cut it any more.

The fall is usually a busy time, so I'm bouncing back at the right moment.  I cleared out two carts of shelf sitters and took them to the thrift downstairs.  I won't be able to shop there for a month now. 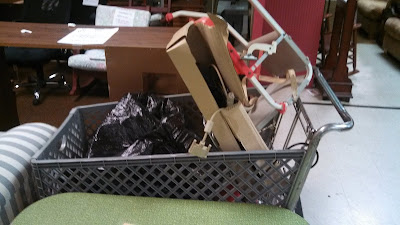 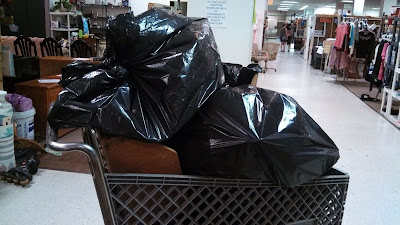 Some of that stuff had been there since I opened the booth!  A lot of it were things that folks have given me.  I have a good line with a couple of vendors who give me their cast offs.  I'll usually sell a lot of it, but there's always a piece or three that just won't do anything.  Some of it came from box lots where I had sold the bulk of the items and more than made my money back.  And there was one little smidge that never should have gone into the booth to begin with.

Back when I started the booth, I set back four or five tubs of stuff I got at a couple of auctions to use as "emergency" stock if I ever ran low.  I never touched the stuff, so I brought it in when I wasn't feeling well.  It was already priced, so it was easier to deal with.  However, there's a reason I deemed the stuff for emergencies only.  Clunker city!  About a fourth of it sold and the rest has sat there and mocked me all summer.  Well, not any more.  I long ago made my money back from those auctions and then some and then some again.  It's all gone now.

I put out some Halloween stuff and will have more coming this week and next.  I also started a small Christmas shelf.  I pulled a bunch of things to markdown as well.  I didn't get to them (ran out of time), so they are still sitting in a cart.  I'm hoping the manager won't notice tomorrow.  I'm going to clearance them until the end of the year, then take what's left to the thrift.

Over the next couple of weeks, I'm going to pump a ton of new stuff into the space.  It's time to turn this ship around!

I feel like I should turn to the camera at this point and exclaim "I'm back, bitches!"  As I have no idea who the "bitches" are which I would be referring to, I'm going to refrain from doing so.  I still have a massive amount of stuff to do, but it feels better in there than it has in weeks.  I'll be heading back on Wednesday to finish up.

Other than that, this week is going to be mostly about catching up and moving on.  To quote Robert Earl Keen:

When you're physically and emotionally worn, a good nap is a beautiful thing.

Glad you enjoyed your relaxing staycation!

Sounds like you're getting your groove back. That's good, really good. I'm sure your sales will pick up appropriately, too!