Call this one the "Oh Boy!" Monday Rambles!  Go pour yourself another cup of coffee before you start this one. You are gonna need it, for sure.

I had to get X-rays on Friday for my next cancer follow up, which is tomorrow.  After  I was done, I hit a nearby thrift.  Hadn't been in a while due to lack of time, so it was nice to get in there.  I got a few things, incuding this cobalt blue (I know it looks black in the pic) Bybee coffee mug.  It's one of the older ones too.  I love Bybee and grab it whenever I can! 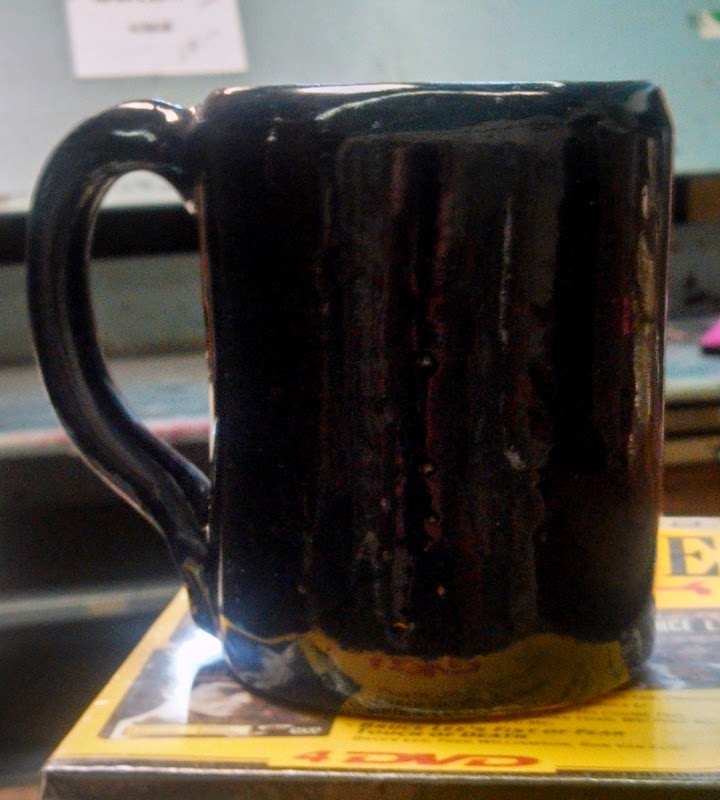 I spent some time talking to the cashier, who is getting ready to retire and move to the Southwest.  I shared some stories of my time in El Paso as a kid.  She's looking forward to her next big adventure, and I hope she finds it!

Since my summer hours started last week, which means that I'm free every day after noon, I spent most of the week at the Peddlers Mall working.  My goal was to get a bunch of stuff priced and out of storage, then work on my booth arrangement and layout.  Some of my recent small furniture purchases aren't quite fitting in the way I want them to.  For me, the only thing to do is pull all of it out of the booth and carefully reintroduce it one piece at a time, until I get it right.

I did get a lot priced and out:  five carts worth.  I did not get to the other issue, so that will be this week's booth agenda, along with getting all my stock in order in the booth.  I kind of emptied the aforementioned five carts by just putting stuff anywhere it would fit, without much planning.  I kind of ran out of time.  At least, there were new items out there.

It was kind of important that I get some storage space cleared out, because Saturday was one of the biggest sales of the year for me:  A huge church sale with literally rooms of stuff and the nearby neighborhood.  I always have to make 3-4 passes through the church sale, filling at least one box every time.  I knew I would be coming in with stuff to drop off, so I knew I needed to make room for it.

As you can tell from yesterday's Mazda post, I did have quite a lot.  Sadly, I was not able to get shots of most of the things as they were coming out of the van.  I'll explain why in a minute.  In the meantime, here are some (but only some) of the larger items that were in Mazda on Saturday.

That is supposed to be my "smugly holding a purple Christmas tree" face.  It came off more like my "I'm holding in a bodily function" face.  Maybe I shouldn't try to make faces?

The tree is kind of smushed, because I needed to fold up the branches in order to make more room in the van.  It doesn't have a stand, although there were pieces of a stand with it.  The lady in tahe room at the church told me that stand didn't work for that tree, but I think I can either get it to work or can jerry-rig something passable or thrift a small stand.  Either way, purple tree will walk again!  THIS I DO SWEAR!

That pinball game also has legs, but we had to take them off to get it into the van.  We decided that our new rule is that the van is not full until I have to hold something in my lap.  I didn't have to do that this time, so we didn't totally fill it up!

When we got to the Peddlers Mall, we started to unload, but it got pretty chaotic there.  See for yourself. Keith and I ended up helping the staff deal with the situation.  We didn't really do that much, but we were glad to be able to help a little.  I watched the register area while the staff were busy and Keith managed traffic at the front door as the store was closing.  It was a scary situation, and I felt really sorry for both the woman involved and the manager having to handle the crisis, which I felt she did very well.  Anyway, that's why I didn't have time to get many more pics of what was in Mazda.  I'll make that up later in the week.

Sunday, I went to the library book sale for box day.  My intentions were to get one box, maybe two, depending on what was there.  I was focused on three areas:  manga/graphic novels, religious books/Bibles, and media/CD/DVD.  There ended up being very little of the first category and none of the last, so I ended up branching out a little.  I did get some nice religious books and Bibles, though.

We then went to my uncle's to get his yard sale leftovers, which gave me another Mazda load to deal with this weekend!  Since there's no room in my storage at the mall until later in the week, we ended up bringing it home.  I went through everything and set about 2/3 of it back for the Peddlers Mall outdoor sale in two weeks.  I'll have a nice full area with lots of awesome stuff cheap!  The other third went back in the van to go over to the Peddlers Mall tomorrow.

I forgot to take a full van pic, but here's some of it all spread out:


Those two boxes on the lower right are from the book sale.

To top everything off, it's also junk set out in our neighborhood, and we've had no time to really go hunting!  It's supposed to rain tomorrow, so I guess we'll be out of luck.  You win some, you miss some, I guess.

Of course, junk on the curbs means pickers in the 'hood.  I had some tables set up out back as I was unloading the van and going through stuff this afternoon.  These two doofuses gentlemen pulled up and hollered out the truck window:

Then came the woman who slowed her car like she was about to hop out and start grabbing stuff, until she saw me standing there and drove off.  Really people!  No one sets out curb junk on tables!  Get real!  No wonder junkers and pickers get such a bad rap.

I rarely find manga/graphic novels but I always check the book sections for them. I got lucky once and found those Elfquest books, but that was it. Some discontinued Manga could be worth a lot. I have a Mazda too. It's a 2006 Mazda 5 (sort if a van), and it rattles a bit, but I won't sell it. It just needs a little work.

Gosh that poor lady in the escalator - that's awful! I have heard of crocs getting stuck in them, but nothing like what happened to her. And, WOW Peddlers Mall is HUGE! What a store! Looks like you have plenty to do and lots of junk to tote here and there......HAVE FUN!

**Fingers and toes crossed for the doctor too.

Way too much happening in your week. Nasty escalator accident. Watched the youtube link.

The Peddlers Mall you are in is HUGE. Looking forward to your next post. You must have more than 100 dealers in that mall, likely way more.

I looked up all the Peddlers Malls. Big chain.