I guess I'll start with some of the bigger stuff.  I need to get these items on Craigslist, so maybe putting them here will get me inspired. 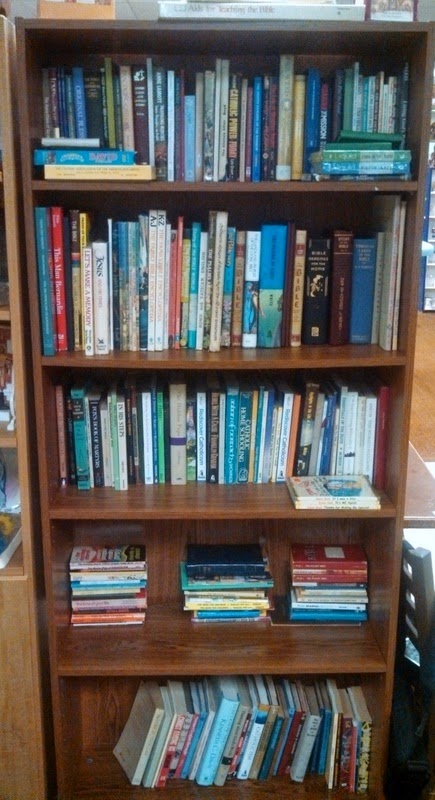 We'll start with the bookcases.  Nothing special here.  Just ordinary pressboard shelving.  You know that kind that's everywhere and that you need so much of in a large space like mine.  There were three of them upstairs at an estate sale.  They were loaded with books.  The seller kept dropping the price until it got low enough that it was worth unloading the things, hauling them down the stairs and cramming them in Mazda--which took the tiny seller woman getting inside to help guide them in.  I bought two of them because that's all we had room for.  If the sale hadn't been out in the middle of nowhere, I would have paid for the other one and come back for it.  The price wasn't low enough for that.  I took both of them and added them to my religious item section and moved all the Bibles, hymnals, and other religious books out of my book booth and into this section.

Then there's this beauty of a cabinet, found in the basement of another estate sale on half-price day, which made it a bargain.  Keith wanted it for our house, but after we wrestled it up and out of the basement (it weighs a TON), he looked at me and said:  "It's yours." 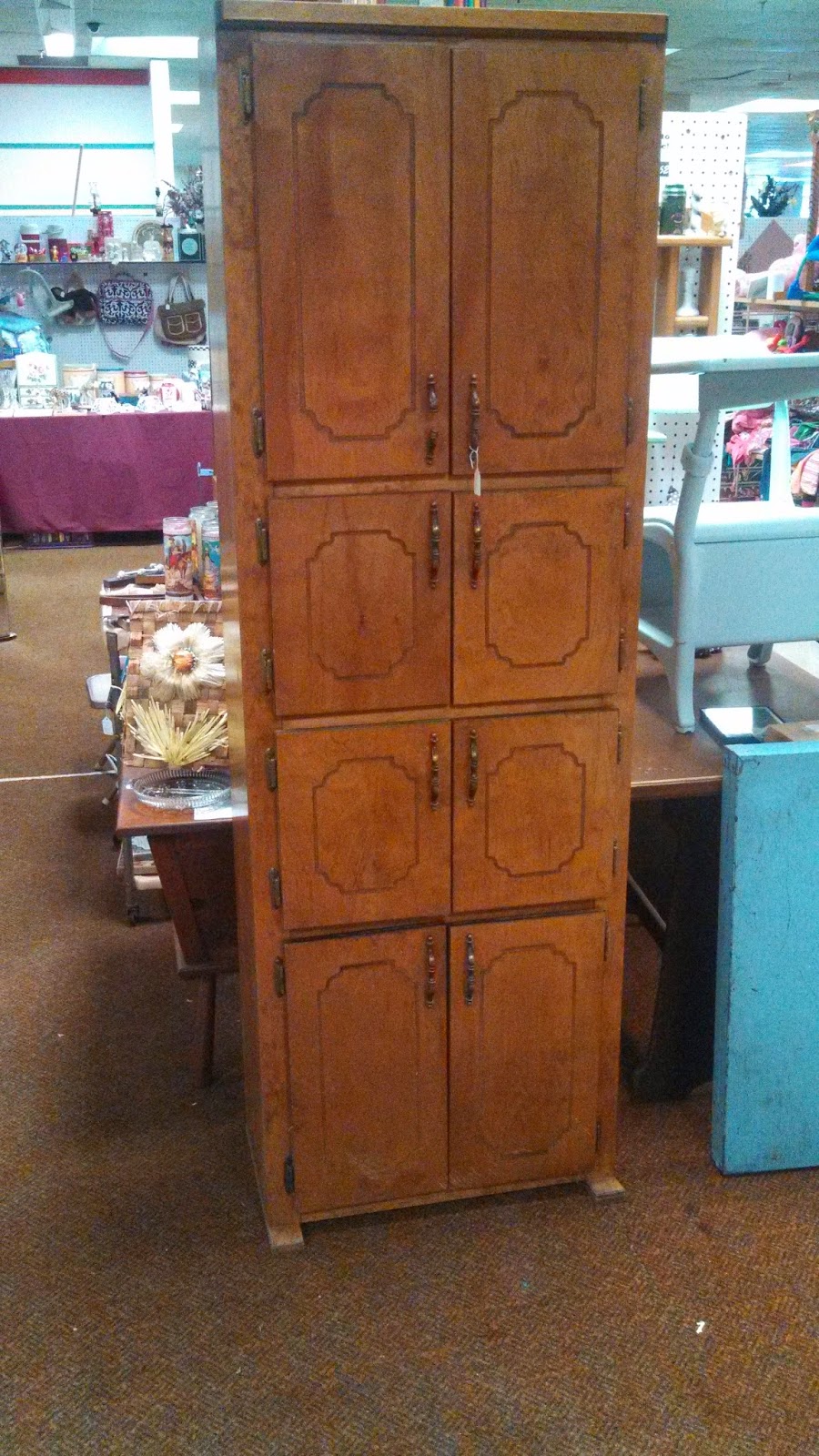 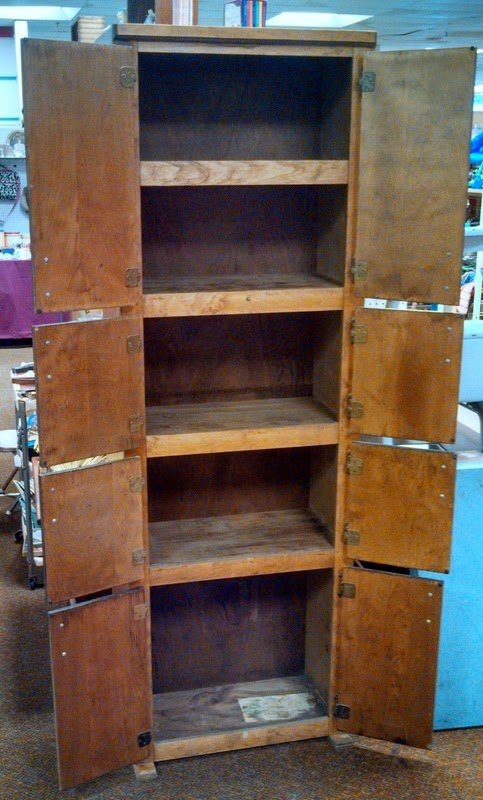 It's got a couple of flaws to it, but is still pretty groovy.  Unfortunately, we majorly eff'd it up getting it into the van.  We've taken one of the seats out of Mazda to have more hauling room, and the metal clamps that hold it in place are exposed.  They scratched the hell out of one side.  I never even thought to check for that and am still kicking myself over it.  Those are some deep-ass scratches, too! 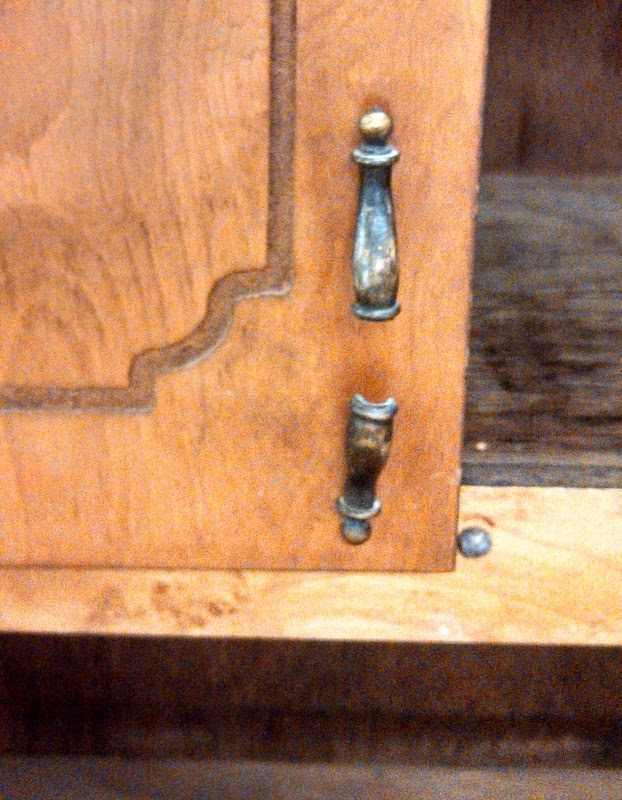 I can't pass up a cheap school desk, especially when it is a nice shade of sky blue.  Awww... 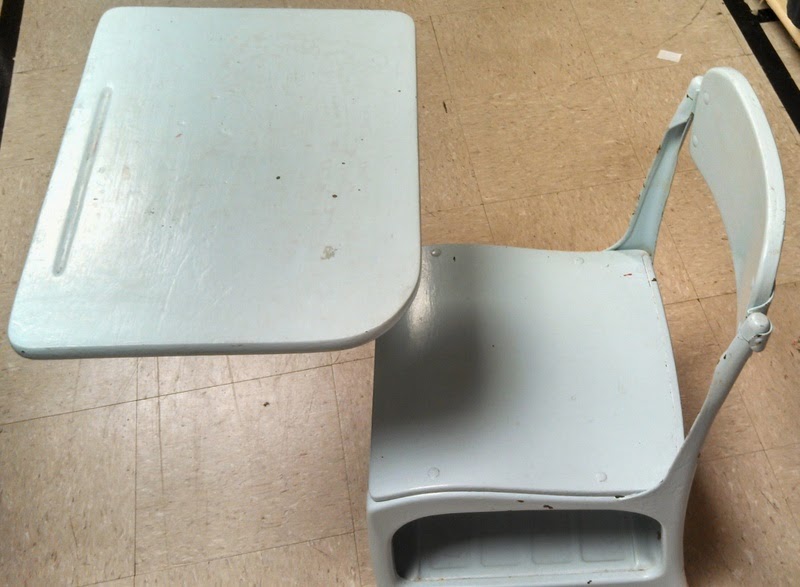 I got this vintage kids' library table from my uncle.  It's just crying for someone to pretty it up and put it to use. 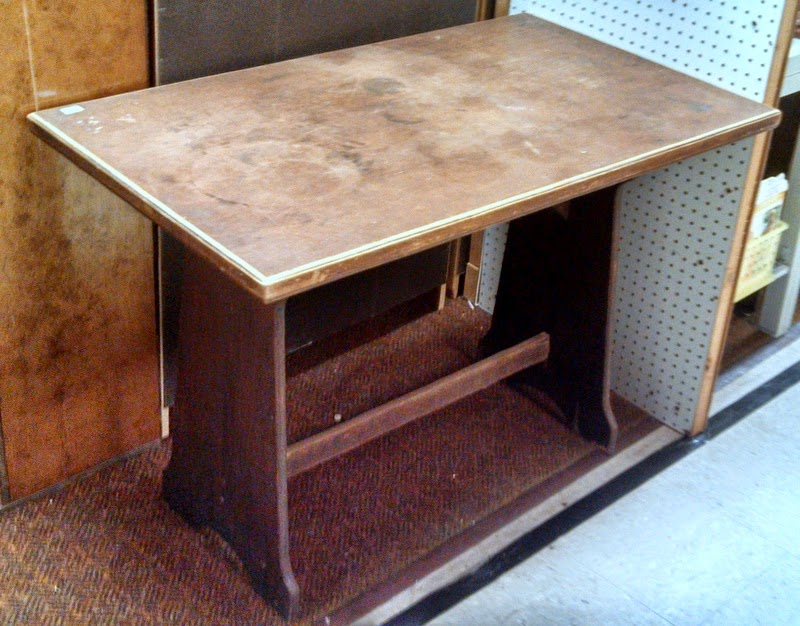 I bought a side table at a yard sale where a woman had been looking at it and taking her time about deciding.  I finally had to start making it really obvious that I was interested too.  If she had made a real move on it, I would have backed off, but when she stepped away without saying anything, I waited precisely no seconds before buying it.  She turned around and I was already taking it to the car.  I won't buy something out from under something while they are still looking at it, but I'm not going to wait while they wander the sale and decide either.

The thing is heavy as hell, too.  While I was struggling across the street with it, the seller called out that she had another one inside for the same price, if I wouldn't mind carrying it out.  I took a look back at the two story house and meekly said:  "It's not upstairs, is it?"

Finally, these awesome vintage wooden folding chairs with leather covered seats have already sold while they were waiting for their blog debut.  I couldn't leave them out though.  I have a thing for chairs, especially when they are this awesome! I saw some awesome bookshelves at a local thrift store. They had real thick shelves and they were wide, like the kind you'd see in an old library. I wish I had the room for them somewhere. Bookshelves today just bend in the middle. I hate that.

Good stuff. It is maddening when stuff gets scratched etc. when loading. Been there too - newly painted dresser, scraped the sides on the seatbelt hooks. Left trails of paint on the van (inside) too. Double ouch.

The blue desk is really sweet. Looking forward to seeing what else you found. Must have taken several trips to haul all the furniture.

It's hard to have too much shelving isn't it! Sounds like some good finds for your booth!
hugs,
Linda