This is the space where my booths were.  The floor spots, anyway.  Half of my eight booths were wall spaces.  The worn masking tape shows the original outlines laid out when the store opened. 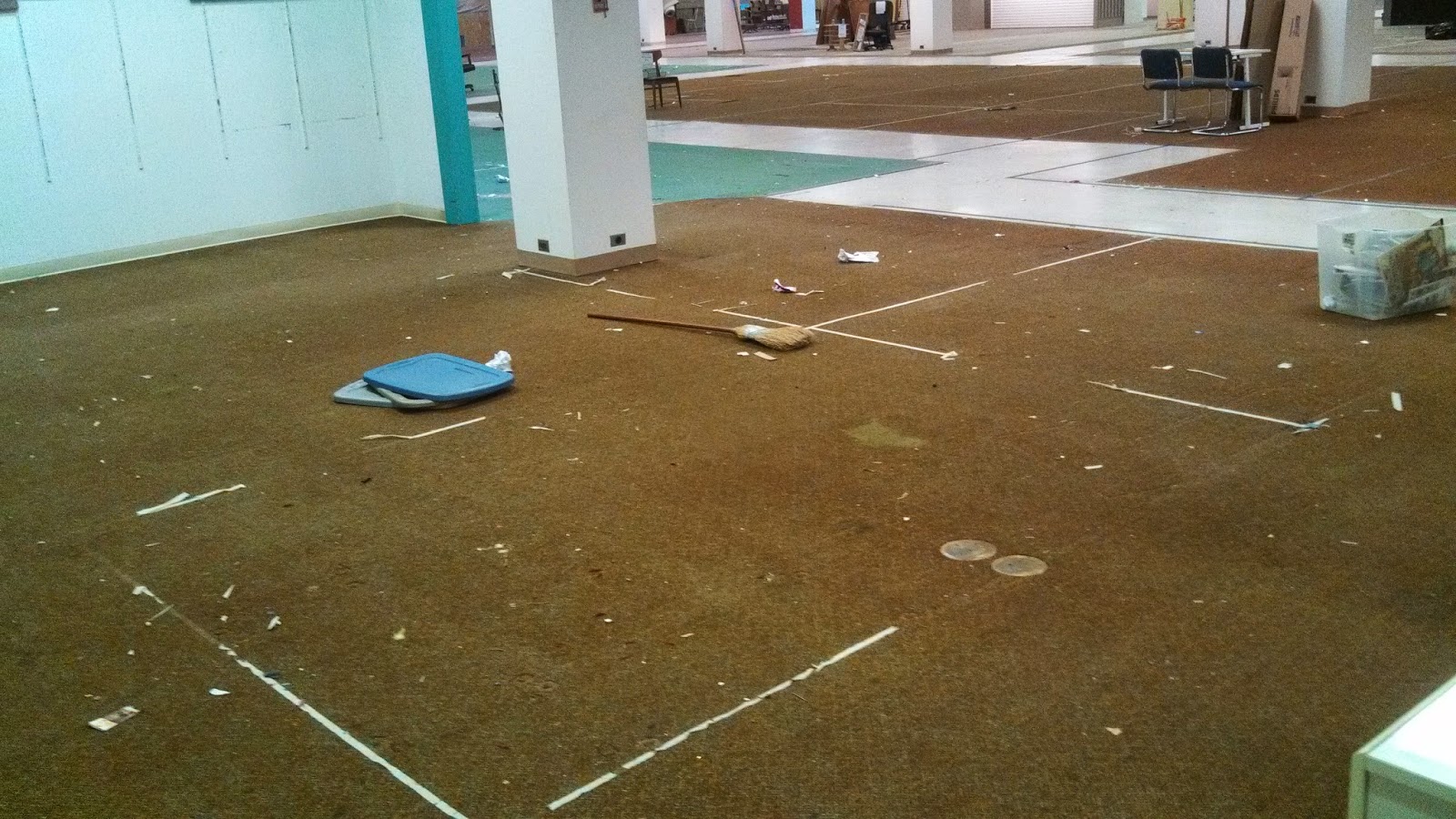 The rectangle closest to the camera was the first booth I took.  The store had been open a week at that location.  I had been to the grand opening and decided to take the plunge.  I was wanting a wall space, but by the time I talked it over with Keith and headed back the next weekend, all the wall spots were rented out.  This one floor space was just about all that was left.

Most of the floor spaces are 8 x 10, but this one is 8 x 11, so I had to pay a little bit more rent.  Eddie's Attic was born!  Over the years, I've seen a lot of people come and go in the spaces around me, but I was a stable presence in this little back corner of the mall. Eventually, I would have regulars coming in to find me in this regular spot.

After about six months, the people in the booth  diagonally across from mine left, and I rented that spot.  This is the spot with the column in the corner.  I was noticing that my comics, books, CD's and DVD's were selling very well for me. I wanted to expand that into a whole booth.  This one had the advantage of being close to my current spot (easier to stock and tidy), plus it had walls and shelves already installed.  Shelves are good for books, you know.  I had to buy those from the previous vendor, but it was worth it.

I had become friendly with the guy in the space in between my spaces (where the tote lids are).  I started kidding him that I was going to squeeze him out, take over his spot and call my three booth empire "Ed-Mart"!  He had his booth on this side of the mall, and his wife had one on the opposite side.  Eventually, one or the other of them took a new job and had less time for the booths, so they incorporated them together into her booth.  Before he cleared out of his space, he recommended to the manager that she offer me first dibs at the booth.  It was a gesture I will always appreciate.  Of course, I jumped at the chance.  It was also at this point that the manager and I started to get to know each other better.

We had always spoken and been nice to each other, but I am, honestly, kind of shy in person.  It's hard for me to get to know others and vice-versa.  I started making time to hang at the register a little bit and chat with people.  I learned a lot by doing that and made several good friends.  It was also about this time that I started to get to know a few other vendors a little better.

I left the walls up in the book corner because of the shelves, so my space was kind of cut up.  Eventually, I started thinking about ways to unite my spaces.  One option that seemed out of reach was the taking the fourth space in that block, the one where the box of trash is in the picture.   The vendor there gave up the space, but had a ton of walls and shelves built in there.  If I took the space, I would have had to buy them and I didn't want to do that.  For one thing, they were expensive.  For another, I was moving towards ditching my walls entirely.

Then, right after I had my cancer surgery, something major happened.  A mall down the road closed, meaning that there would be a lot of vendors heading our way looking for new booths.  If I didn't hop on that empty spot, I might not be able to get it for a while.  Plus, the store informed me that they could just move the walls out if I didn't want them.  And they offered to buy my walls and shelves from me, so that I could create one big spot!  I was fresh out of surgery, extremely tired and could barely stand.  So, of course, I said yes!

Keith helped me out (i.e. did most of the work) and my four-square dream was realized!  And that big old square remained the heart of my booth for the next two years, with various wall spaces rotating in and out of the picture.  It was a very good fit for me.

Last summer, the rumors started to fly that our closure was imminent.  As in, could happen any minute.  As in, grab your stuff and run!  Flee!  The barbarians are at the gate and they have a wrecking ball!  There was a lot of behind the scenes this and that going on, but that's not mine to comment on publicly.  (I do have some opinions that involve lots of swear words, if you want to ask privately.)  All of that stuff started happening right around the time I started having my best sales ever!  (Isn't that the way it always goes?)

I decided the best route to go was to sit tight, keep having good sales, and wait for definite word.  And the apocalypse didn't happen.  I actually had a thought in the back of my head that it might not happen until this June when the store lease was supposed to be up.  At the very least, I was hoping that we would have until April and get through tax season.  And the hammer fell on January 2.  Happy New Year.

It is what it is. It was what it was.  (And what it was, was wonderful!)  The deed has been done.  Now that I have everything out and a few days of good sleep under my belt, I'm looking forward to finally getting this new store up to snuff.  I took those spots originally to have a place to land when/if the hammer did fall.  I held on to them, even though they weren't performing the way I wanted.  I knew I was going to need them.  I have to admit that at least part of the fault is mine for letting the better selling store eat all my attention.  That issue has been resolved for me, so now it's time to rock and roll.

Look out world.  Eddie's Attic/Booth 62 still has a hell of a lot to do, say, and sell!

BEST of luck to you in the "new" space and thanks for taking us along on your journey :)

I had to leave a store (and it was a real pain to pack, haul, come back pack, haul etc. We lived 1 ferry ride and 3 hours from that store. Never again will I do a distance like that. Exhausting. I am glad you posted your 'after' pictures from your move. Gives context to your labours.
Joy

So sad to look at the photo of the empty booth. This has happened to me five times. I did it to myself back in December and hauled all my junk down the aisle to a new huge space. It has paid off in doubled sales. I wish the best for you in the new mall. Go get'em!

So interesting to hear how your grew and prospered there. Now on to the next booth and getting those sales back up. You can do it!
hugs,
Linda