Well, this is the view outside my kitchen door today.

That's Keith shoveling snow.  Silly man.  Doesn't he know it's still snowing?  And this is the view outside the back door. 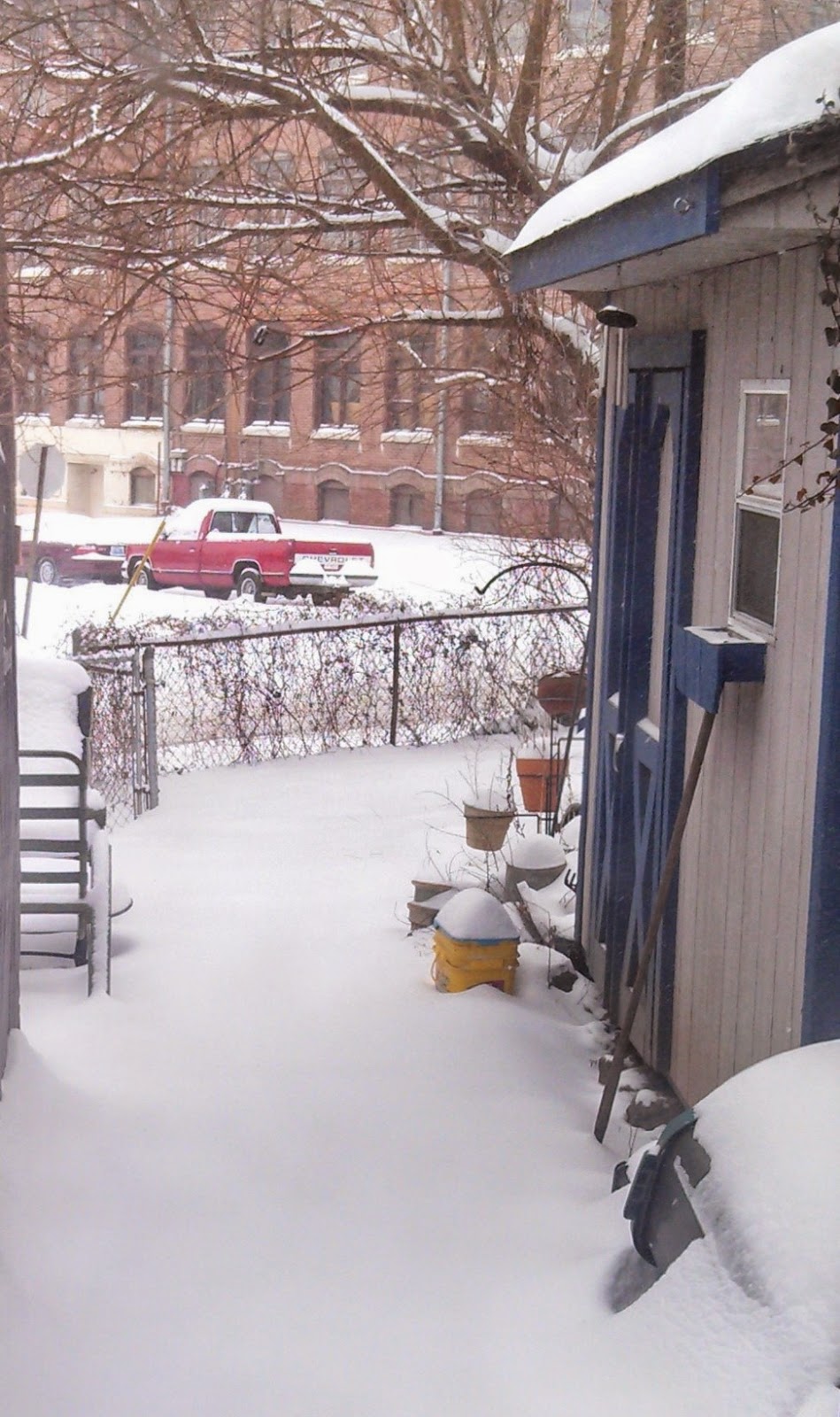 It's supposed to keep doing this. All.  Day.  Long.

So, all things considered, I don't think I'll be going to Goodwill as planned.  Instead, I shall stay in and blog, eat apple pie, drink hot chocolate, price and photograph cool finds, make popcorn, do laundry, listen to music, and take a nap.

Of course, it's 3:30 in the afternoon as I'm typing this, so the work is proceeding, well, slowly.  I have gotten the nap out of the way (of course), and am currently listening to music, so it's picking up a little.  I'm being kind of lazy because I have already found out that I won't be working tomorrow. Actually, the rest of the week looks pretty doubtful.  I do need to get to that laundry, or else I'll be going to Goodwill anyway.  To find clean undies.  (TMI?)

With that settled, let's move on to other things.  We got our "wedding rings" on Saturday!  It seemed like the thing to do on Valentines Day, plus we had a Groupon.  I think they came out really well. 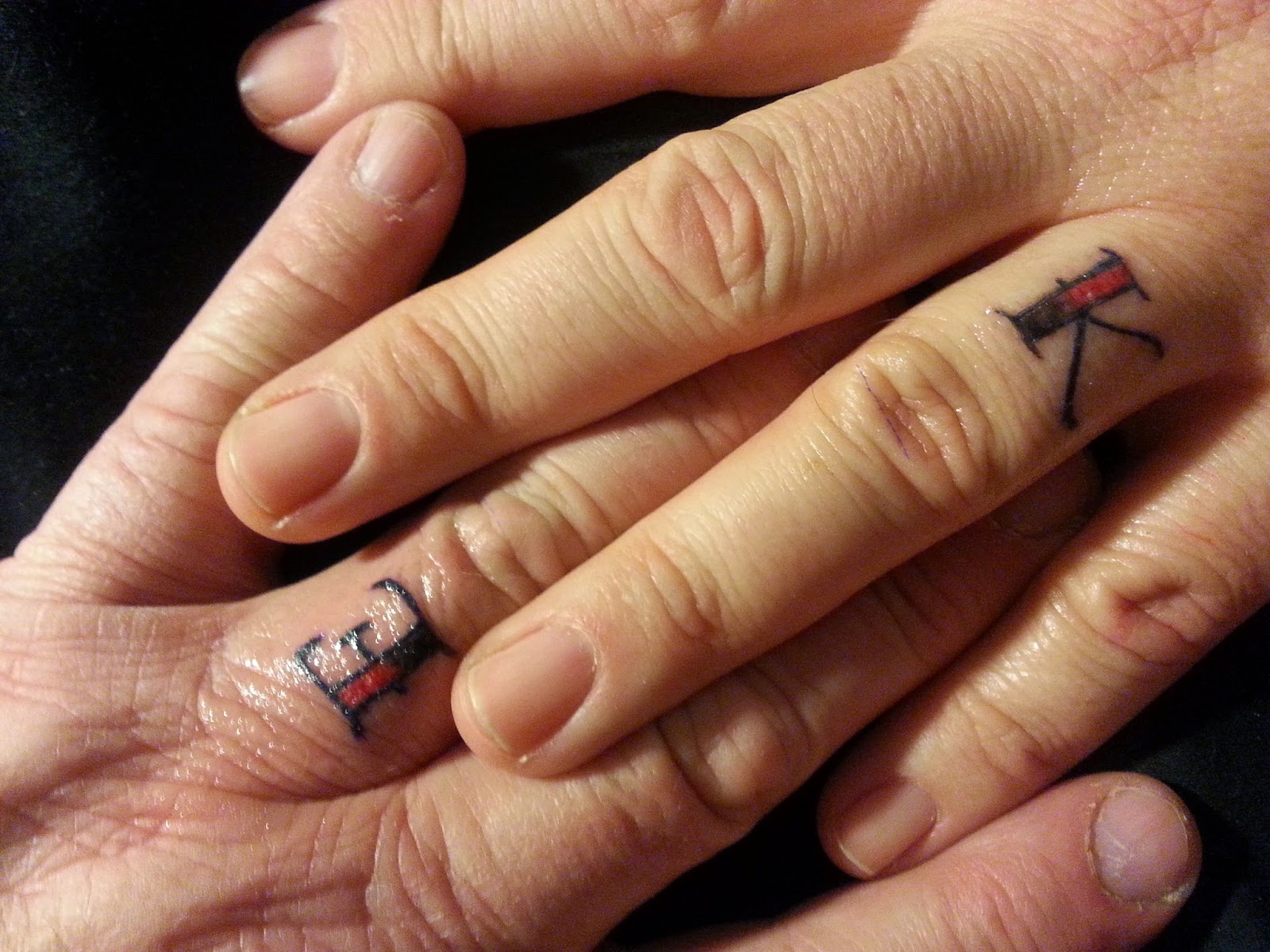 I mean, if you're going to wait until your fifties to get your first tattoo, it might as well be your husband's initial.  Seriously, we are so not jewelry people, and I would be the first one to lose a ring.  It just didn't seem worth the expense.  I think we can keep up with our fingers pretty well.  (Unless one of us takes up meat carving as a hobby.)

The original idea was to use all three of our initials, plus I wanted the wedding date as well.  Turns out that there's a limit to what you can put on one finger.  Glad I found that out before I asked for the Constitution on my other hand.  To keep it legible and prevent everything fading into an unreadable mush, we went with just first initials.  That actually solved a bit of a dilemma regarding my initials, which happen to be the same as a former boss I had who was, well, psycho.  She also insisted on going by those initials as her name, further complicating the issue.  Truth be told, I had them first, but she ranks very high on my list of people I never want to interact with under any circumstances again EVER.  Seriously, she could be standing outside my door with one of those big-ass Publishers Clearinghouse checks, and I would refuse to open it.  It was that bad.  Definitely not something either of us want to have associated with our marriage.

I like the way they turned out.  It's bold. Kind of quirky.  And really so very Keith and Eddie.  We had the spot of color added to keep it from looking too biker or prison-ish.  Quirky? Yes, yes we are.  Bad-ass mofo?  So very much not.

That shine on the tats (I can say that now.  We got tats!) is from the ointment we have to put on them for the first few days.  In case you were wondering, it didn't hurt at all.  Seriously.  I've been in more pain at the cancer center in the pre-port days.  (Engage!)  The only real feeling I had was like a mild sunburn, and that was right after he finished the tattoo.

Overall, it was a very cool experience.  The guy who did it for us (Smithers) was way cool and loved the idea that this was our wedding rings.  We went to Triumph Tattoos.  If you're ever in Louisville and need a tattoo, I recommend them.  (I guess you can "need" a tattoo?)  Somewhere in the back of our heads, we're both contemplating another one.  I can see why people get into tats.

On Friday, I went out to the booths for the first time since the move.  The manager looked at me and said:  "Are you all rested up from the move?"  I said I was and she added:  "Good.  Because your booths look like crap."


I want to put up a sign that says "Pardon our mess, until we figure out what the hell we're doing."

During the move, I just told folks to drop stuff off at that store and "stick it wherever it will fit."  The goal was moving, not pretty.  Now I have to go back and make all that pretty again.  I didn't take a pic of the other booth, which was waaaaaaay worse. I worked on it several hours on Friday and got it to the point of being "passable."  As in it might pass for being a booth and not a junk pile, but not much more.

Surprisingly, sales have been pretty decent since the move.  A few of the large pieces I brought over have sold already.   My theory is that they were the ones people could get to.  I did move all of the large ticket items around to where they were accessible, in hopes of continuing that trend.

Also on Friday, I picked up some surplus equipment for free, including some old transcription/dictation recorders.  You know, the ones with the foot pedals?  That one prompted the old "Just because it's free, you don't have to take it" lecture from Keith.  I hear that every so often.  It makes him feel better or something.  Well, I sold every one of those suckers on Saturday.  Not that I'm gloating or anything.

It was so good this weekend to have normal errands and stuff to do, instead of booth moving.  It was just so relaxing and fun!

I was planning on going over to the booths to finish up the straightening on Wednesday, then do a super-major restock on Saturday.  However, I think the weather has scrambled those plans.  I'm not able to get into shed or storage to get stuff ready right now.  Plus, I just found out that the town where this store is located has declared a weather-related state of emergency and closed the streets to everyone except emergency personnel.  So much for sales today.  (And maybe the rest of the week.)  Dang.  At least I know that I'll be in for a good day once it clears up.  Nothing makes for crowds of eager shoppers like cabin fever.

As bad as all this snow is, I do know it pales in comparison to what the Northeast has been enduring this winter.  I do hope that everyone's friends and loved ones in that part of the world are safe and warm.
Posted by EM at 2/16/2015 05:02:00 PM

Loved reading your post today Eddie. A lot of work to get set up.
Joy

We got snow today but just a few inches, nothing like it should be this time of year, so I have no business complaining!

Your post today made me giggle. :D Just endured 3 days with my MIL visiting so boy howdy, did I need a giggle.

Hope you get the booths straightened up soon. So much work created by the move. I LOVE your tattoo rings. What a cool idea! It is cold and rainy here and getting icy tonight. Take care and be warm!
hugs,
Linda

I was going to get the Constitution on my finger, so thanks for the heads up. :) Your tattoos are perfect. My son and I have tattoos we want to get someday. Is that weird?

We had snow today and there was no school or much of anything else. I took it as a snow day and did a whole lot of nothing. Which I never do- enjoy it while you can!

When I heard Louisville KY got snow, I thought of you. Although it sucks, it gives you a good reason to stay in and do nothing or catch up on things at home. Love the tat rings. Congratulations.

Actually, Kentucky lad, take it from an upstate New Yorker: one SHOULD shovel after 2 or 3 inches. That way, you don't break your back shoveling a foot of the white stuff.

Congrats on the rings.

Great wedding rings! Such an original idea. I am in the northeast.. Massachusetts to be exact. We are buried in snow with more coming. We have 96 inches of snow on the ground. Roofs are sagging and collapsing under the weight. Not a nice time here. Your blog posts make my day brighter and take me away from the snow worries. Thanks!