Easel fever seems to be sweeping the junking blogs.  First, Shara found the most awesome easel ever.  Then, Linda found a cute little easel.  During the mall closing, I found one too!  It's vintage, aluminum, and a table top model, which means it's also portable. 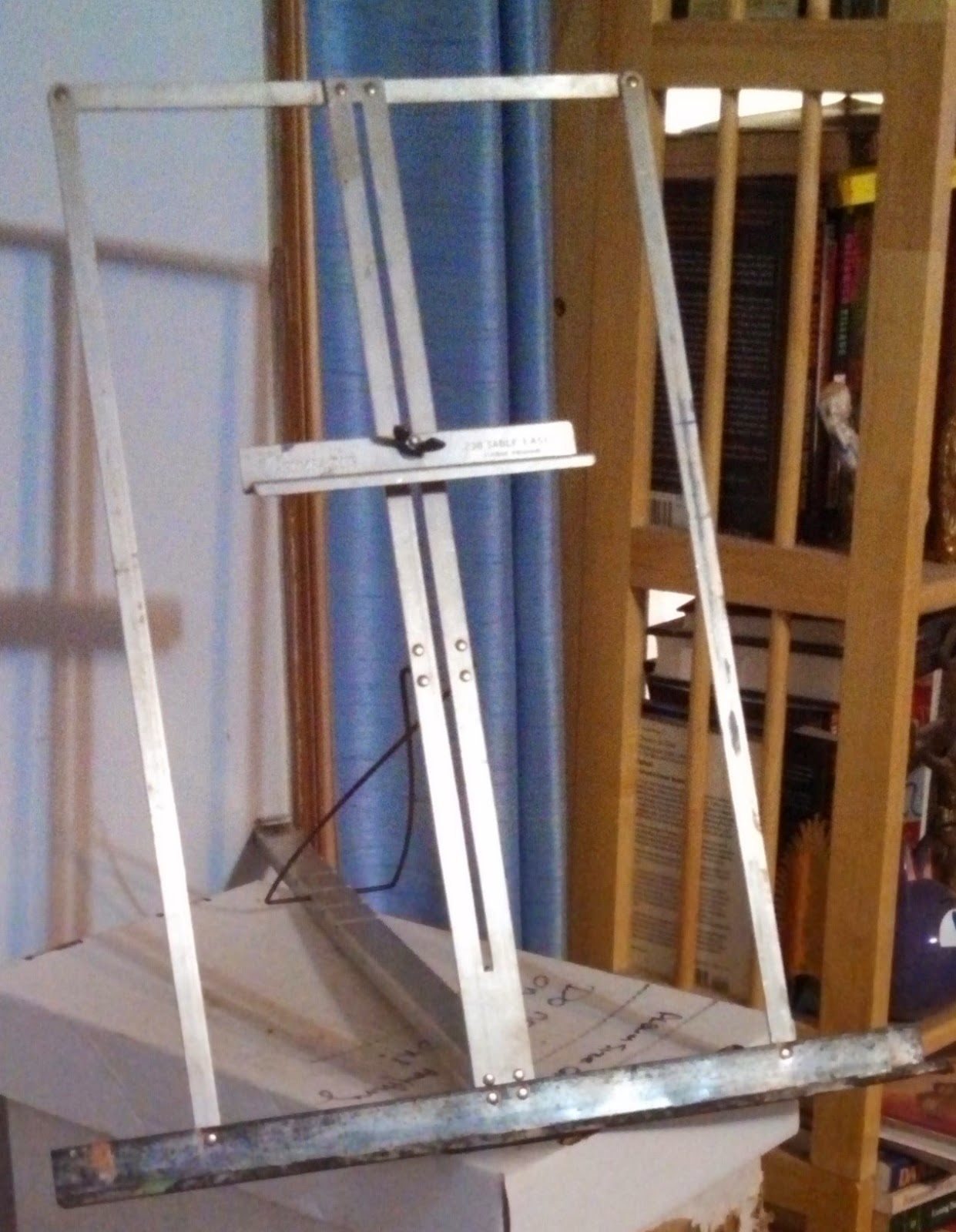 My favorite part of the whole thing is the tag the vendor put on it:  Ezale.  Now, I'm not really one to make fun of the spelling issues of others.  I have enough of my own.  Hell, I had to look up whether the correct spelling is "easel" or "easle."  No, it wasn't the spelling that struck my fancy.  It was the word itself. 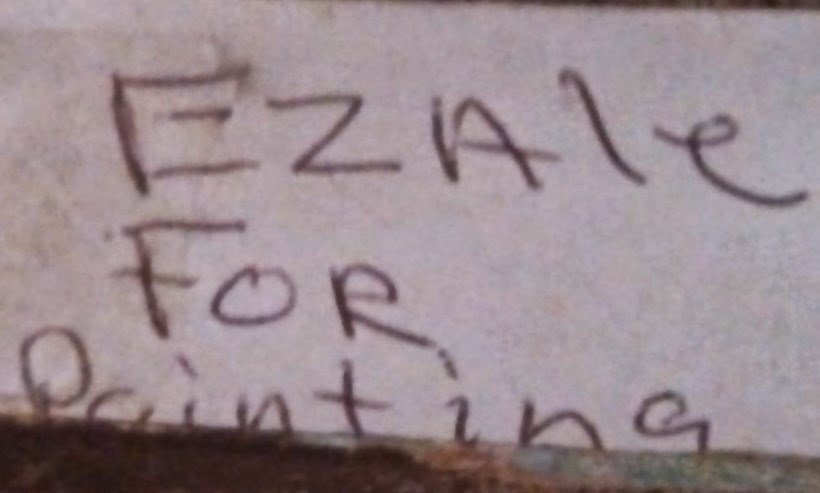 "Ezale" sounds to me like it should be the name of one of those older country ladies I went to church with when I was a kid.  Or one of those elderly aunts that you would only see at family reunions and such.  I'm almost positive that I knew someone named "Ezale" in those days.  If I didn't I should have.  It's such a good name.

That got me to thinking.  What if Ezale was an artist?  What if this was her easel?  What if that wasn't really a price tag, but her way of marking her easel so no one would take it?   What if Ezale was known for her paintings?  In a small town like I grew up in, everyone would know about Miss Ezale and her paintings.  I bet she could be found somewhere every day with her easel set up, making a new painting.  The story probably went like this:

Ezale was an artist.  How she loved to paint!
She used to tell others:  "With no easel, I can't."

"The easel holds my canvas the way I like it.  Just so.
It helps me make paintings wherever I go."


I'm also thinking that Miss Ezale was a bit absent-minded, hence the need to add "for painting" to her tag, so she would not forget what she was supposed to do with her easel.  The whole town is still taking about the time she showed up in the park with her blender and tried to paint a picture with it.  There are even whispers about the little notes she has to herself all over her house, so she won't forget things.  ("Take your night gown off before you get in the shower" is a local favorite.)  Everyone knows that artists are a little quirky and eccentric, so nobody really questions it too much.  Miss Ezale is the town artistic genius and the local color all rolled up into one.  Everybody loves Miss Ezale.

Then I got to thinking a little bit more.  What if Ezale wasn't the painter, but the name the painter gave to the easel?  I name objects all the time.  Lots of other people do too.  That would certainly explain the price tag.  Ezale actually was for sale!  I think that the new story would go something like this:

Ezale is my easel.  She holds my canvas up for me.
She holds it nice and high, and I paint what I see.

She's my most faithful assistant, my dear Ezale.
Without her all my paintings would surely always fail.

I love my dear Ezale.  We shall never part.
If it weren't for sweet Ezale, I could not make my art.

Email ThisBlogThis!Share to TwitterShare to FacebookShare to Pinterest
Labels: Ezale, fun finds, pics, stories, the lad fancies himself a poet

I'm lovin' the "soul" of Ezale ~ but somehow when I first read the Post Title I had a masculine image for Ezale!

...and I'll save everyone from googling the 'name' (WARNING: Do NOT click on 'IMAGES' if you do google!!)
"Out of 5,552,452 records in the U.S. Social Security Administration public data, the name “Ezale” was not present. It is possible the name you are searching has less than five occurrences per year in each state.
I personally think the should be the "2015 Name"!

This post just made my day! I am still coughing like crazy and feeling like crap so this made me smile and laugh and I thank you. What a poet you are. My Google search gave me EZALE as an Oakland CA rapper! So funny! I do name objects and now my little 'ezale' will be even more fun to use.
hugs,
Linda
http://www.buzzfeed.com/naomizeichner/5-minutes-of-funktown-ezale#.mma5dldmQd

OK, that got you two big grins. That was fun.
Joy

Ezale is a true Southern name. I think it is the name of the artist. We have a cat named Azalee after my husband's great aunt who was a tiny, scrappy thing wearing mens clothing and a Pall Mall (unfiltered, of course) stuck to her lower lip. Got my jollies for the night!

My Aunt Ezale made the best fried chicken at the church picnic. :)

Two of my IG friends have found identical wooden easel's like the one I found since I found the one I found. (huh?) I still haven't sold it. I am looking for an eye catching oil painting to put on it at the Junk Ranch. And by "eye catching" I mean hideous.

I loved this post. It made me laugh. You are such a poet. I haven't come across any Ezale's, but your post makes me want to find one.

It's funny how the misspelling of a word can forever change the way you say or think of it. Someone I worked with once wrote a sign and spelled "pickles" as "pickels." We forever called them "pick-elles" after that. Cool story about Ezale or (Ez-ah-lay).

Well, I made a whole comment and misspelled "Ezale". Who'da thunk it?

Anyway, I'd like to propose her middle name as "Mae". Miss Ezale Mae, the painter. I knew someone named Beulah Mae when I was growing up in S. Indiana.... she was probably Ezale's cousin.