I managed to get out and hit some stores this week.  On Tuesday, I met with my uncle, and we went to the store that's always been our usual spot.  I found some good stuff. 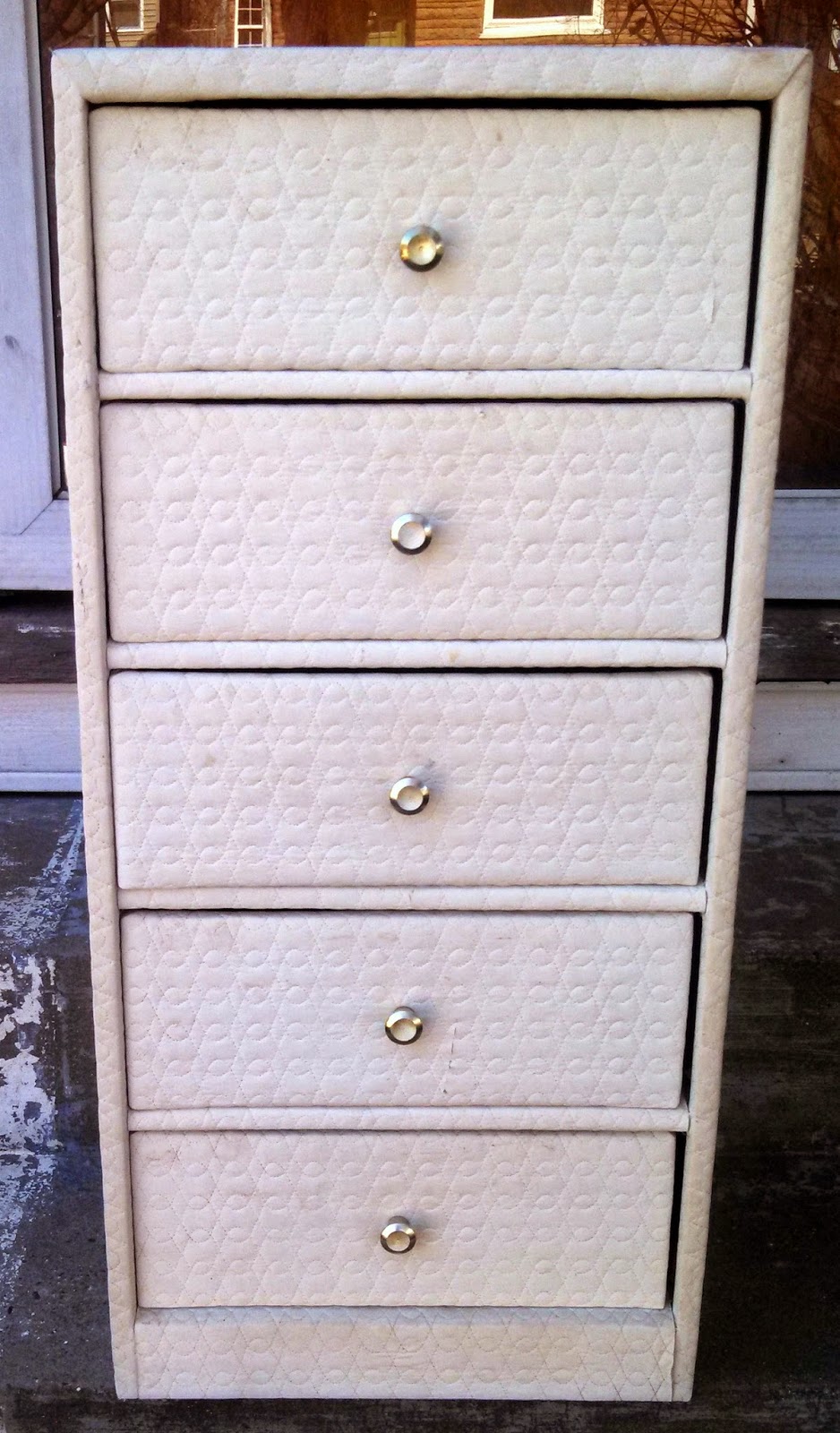 I'm going to call this one "Classic Grandma Boudoir Chest." 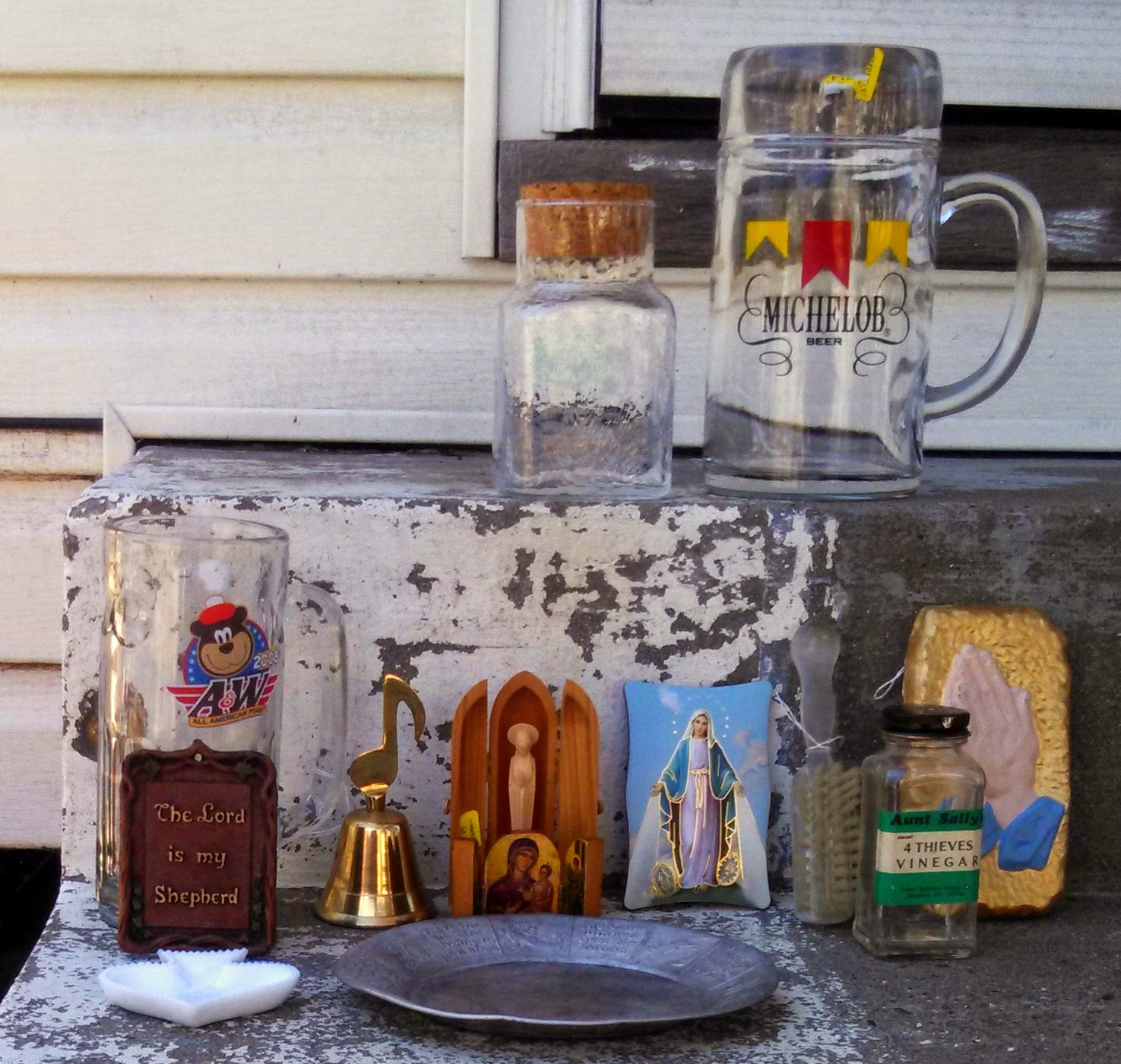 Lots of littles.  I love the 4 Thieves vinegar bottle.  The Madonna in the little wooden niche I'm keeping.  I'm also probably keeping the blue one.  I got four of those little milk glass spade dishes.  Usually, I find the full set of card suites, but this time there were only spades.  I love big beer mugs like the Michelob one here. 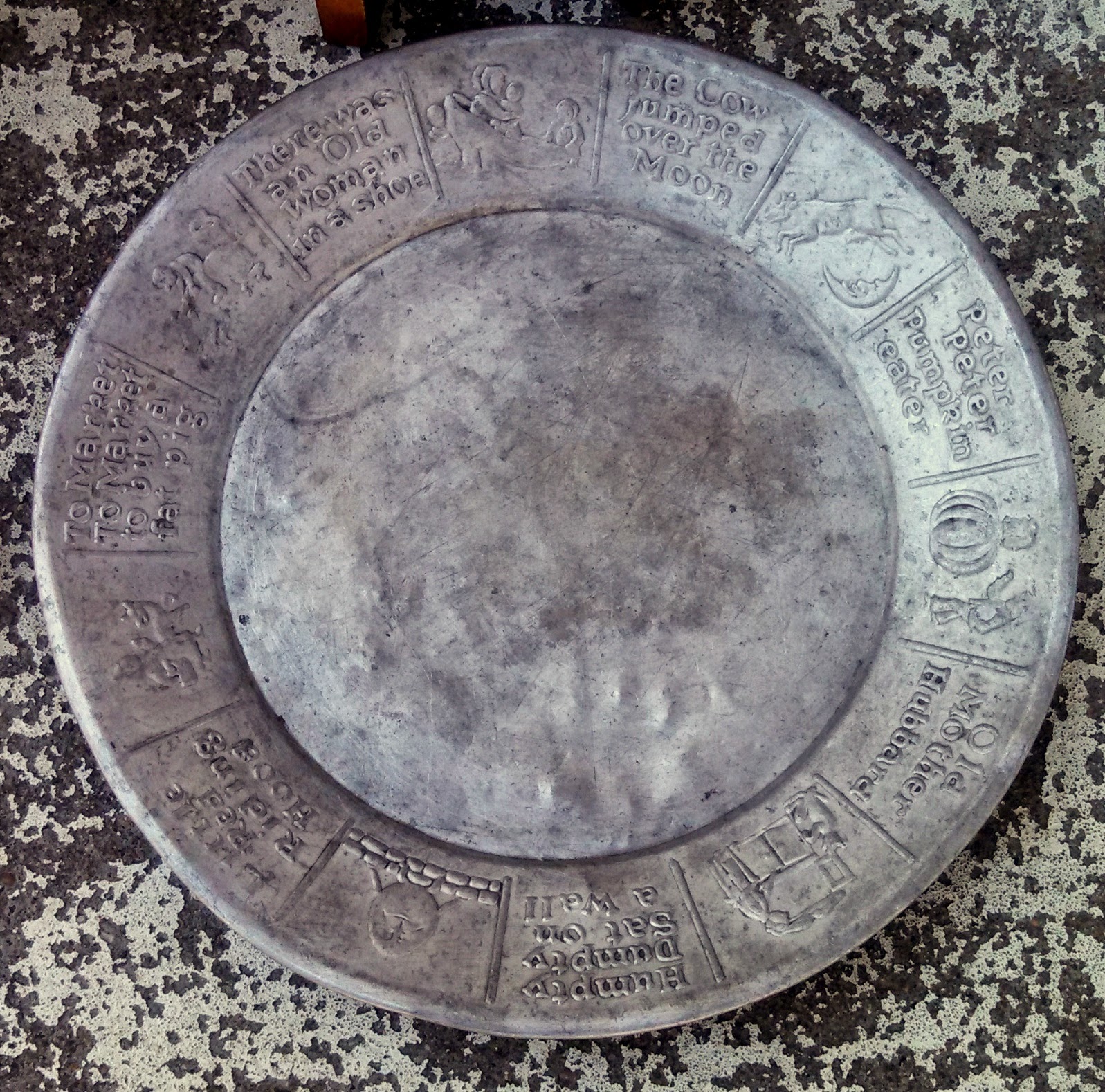 The little plate has nursery rhymes all around it.

Here's a close up of that vinegar bottle. 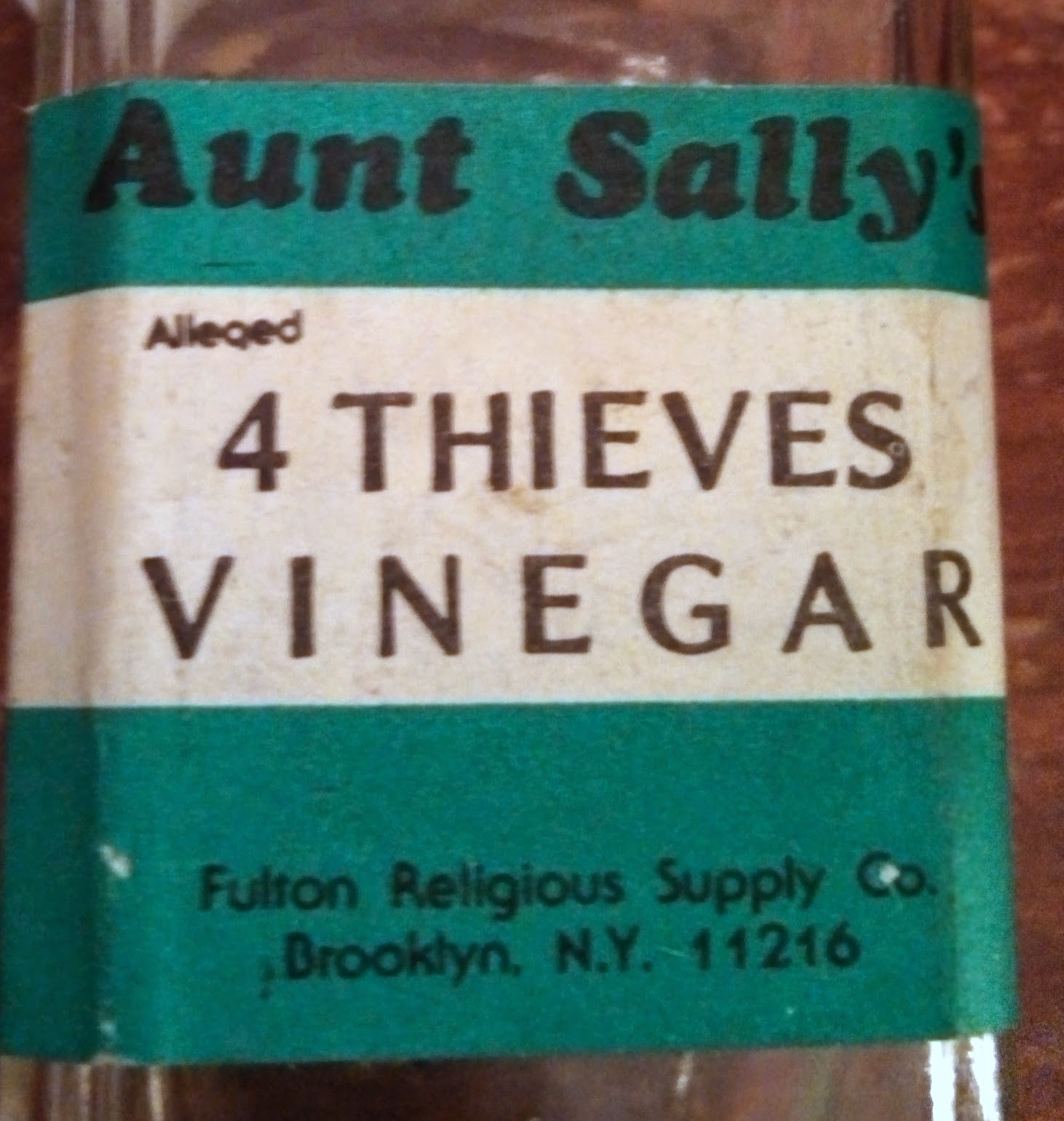 "Alleged."  I love it!  Is this because the thieves haven't had their trial yet?  Here's the story of Four Thieves Vinegar, just in case you've never heard about it.  Maybe the bottle was "alleged" to hold this stuff, but it was never proven? 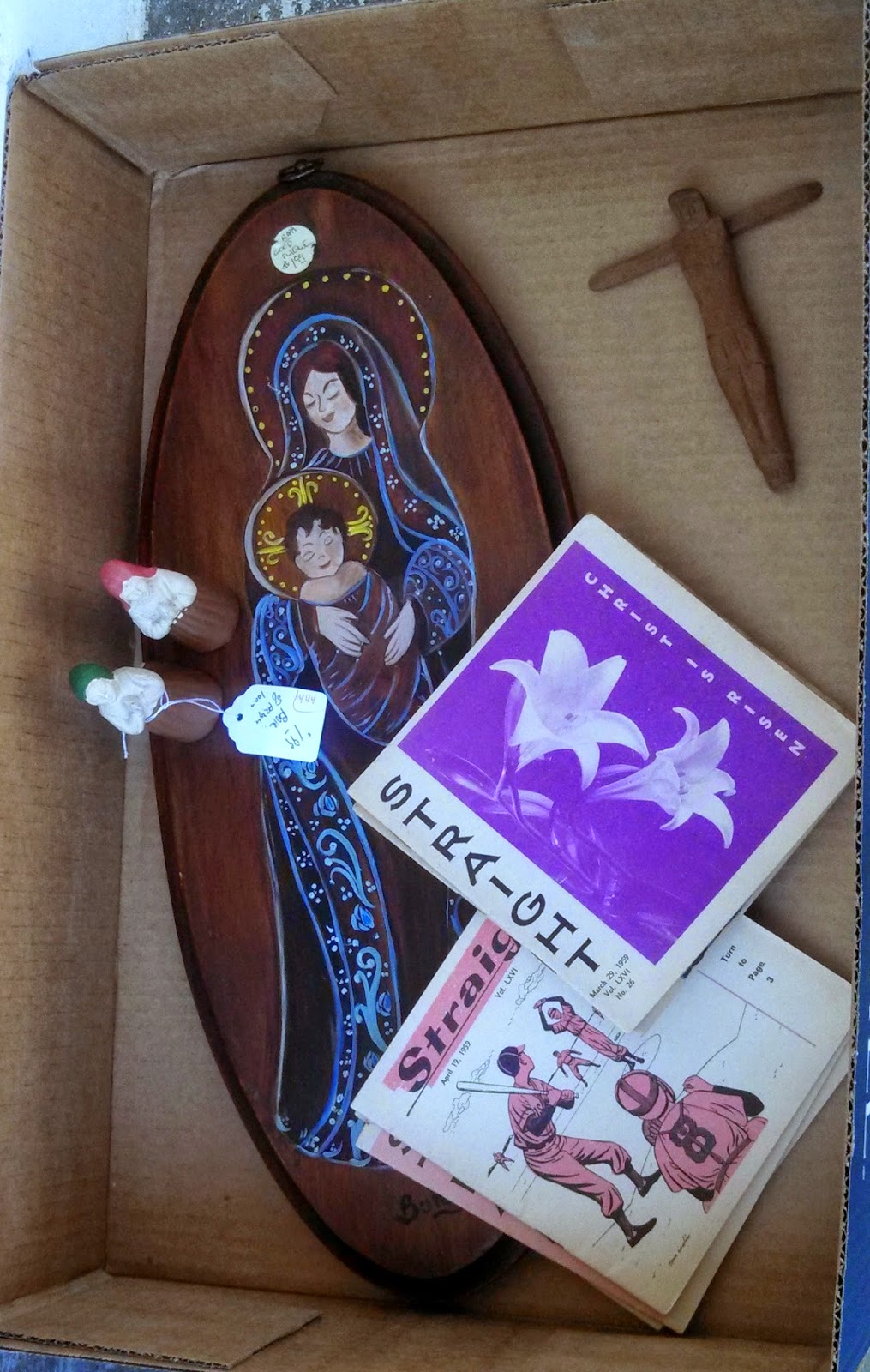 Folksy/craftsy looking Madonna and Child, vintage religious booklets, and primitive crucifixion figure.  The two kneeling girls represent two of the three visionaries of Fatima.  They're headed to the collection. 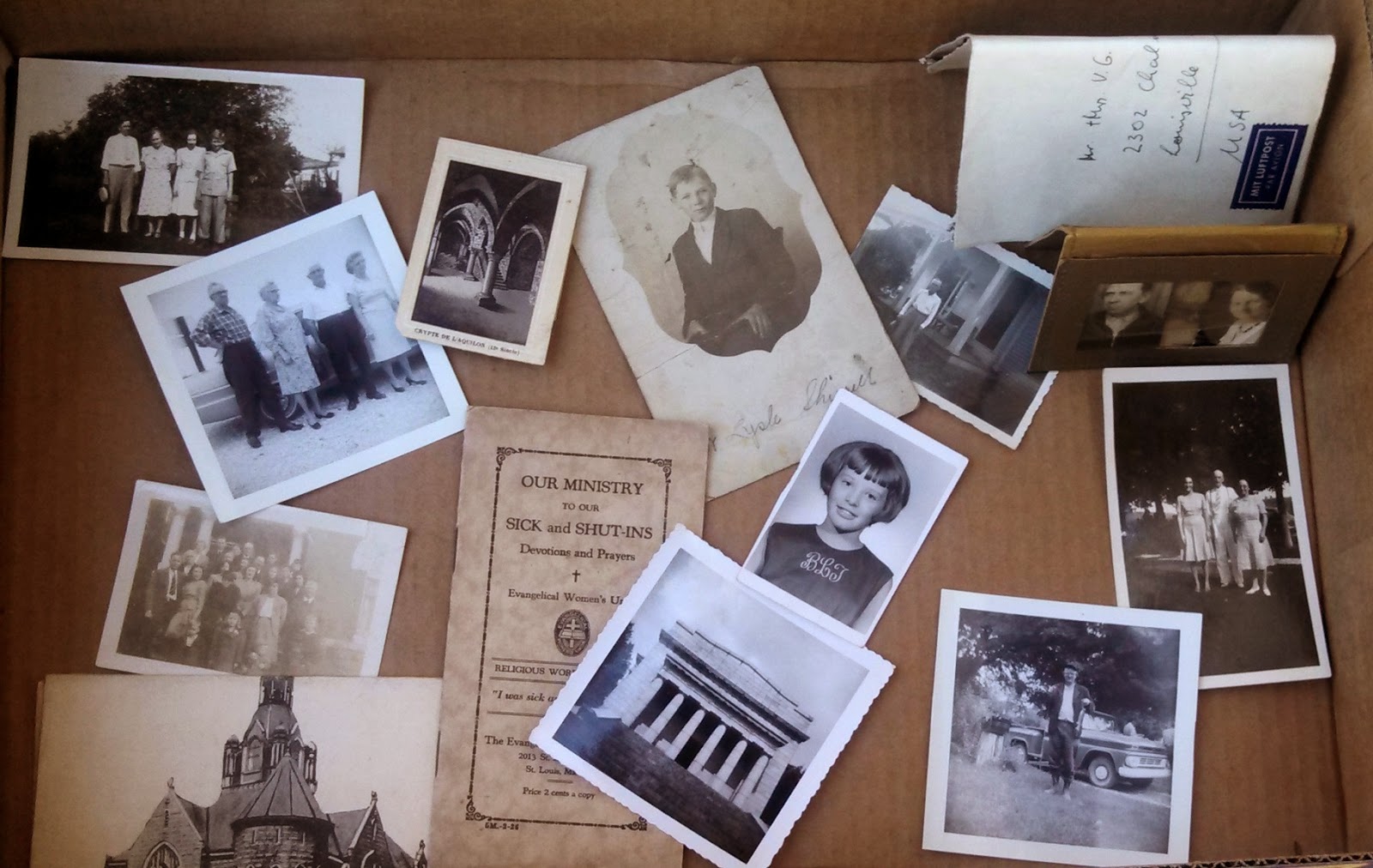 I've never been into old photos, but this packet was cheap enough.  I could see an old church bulletin and religious pamphlet in the bag with the pictures. 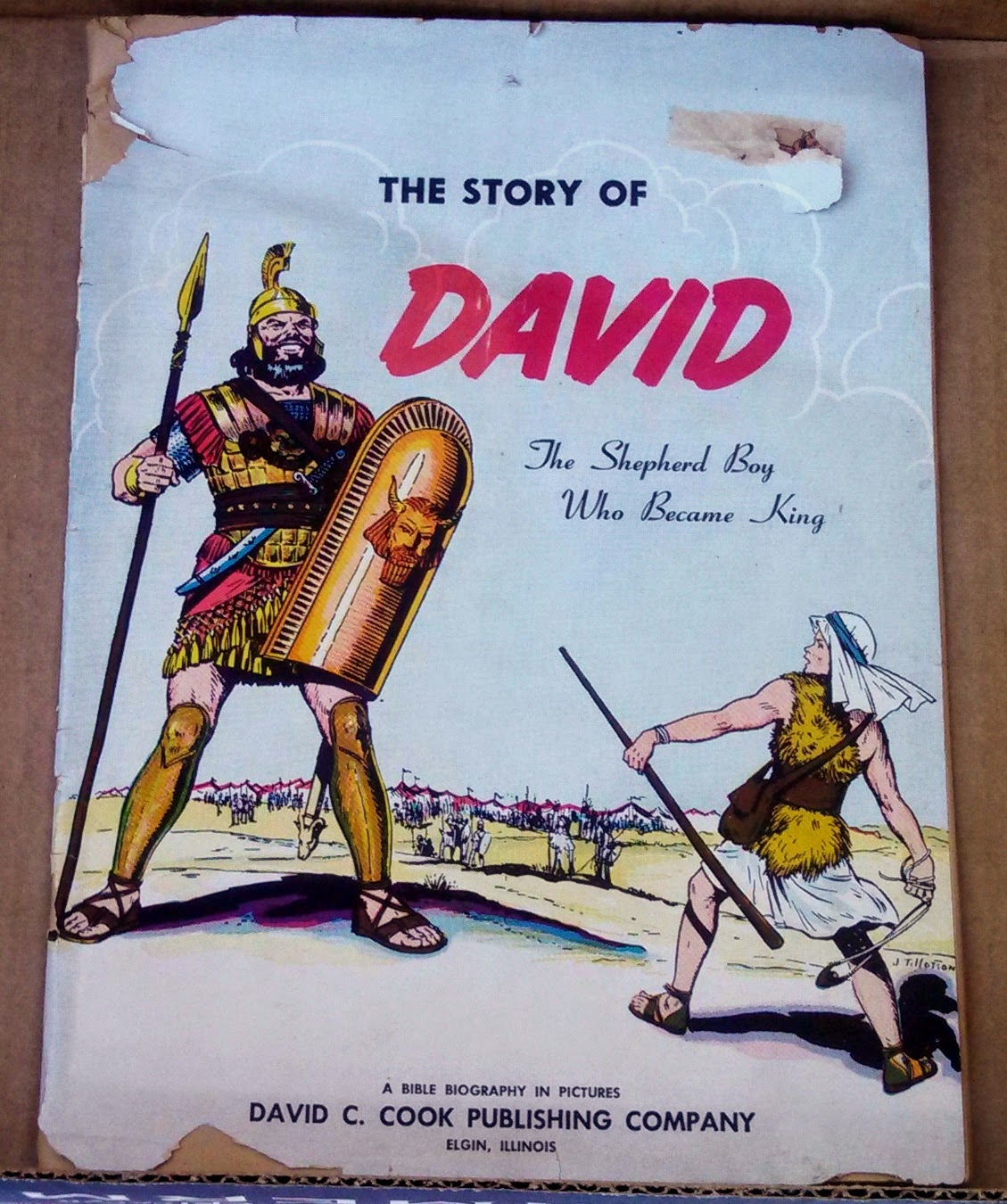 Vintage religious comic?  Yes, please!  It's not in the best shape, but it comes from David Cook, publisher of the classic Bible in comic form, The Picture Bible.  I'm totally nuts about religious and educational comics and snatch them up whenever I find them for my collection.

Later that afternoon, I had to go pick up a prescription, which took me right by another store.  On the way home, I decided to hit up a couple of other stores in the neighborhood. Believe it or not, there's a secondhand store right down the street from me that I had never been to. 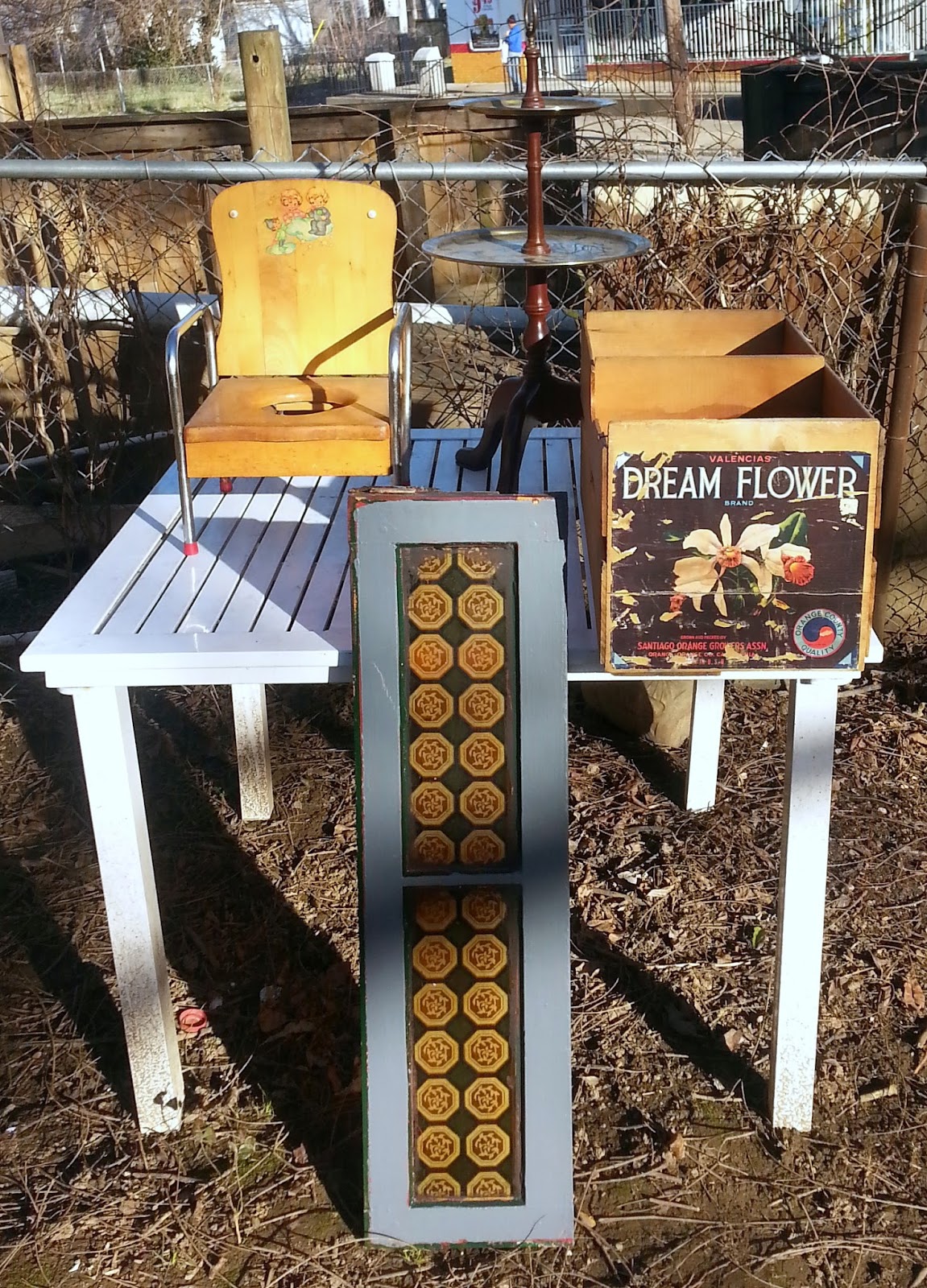 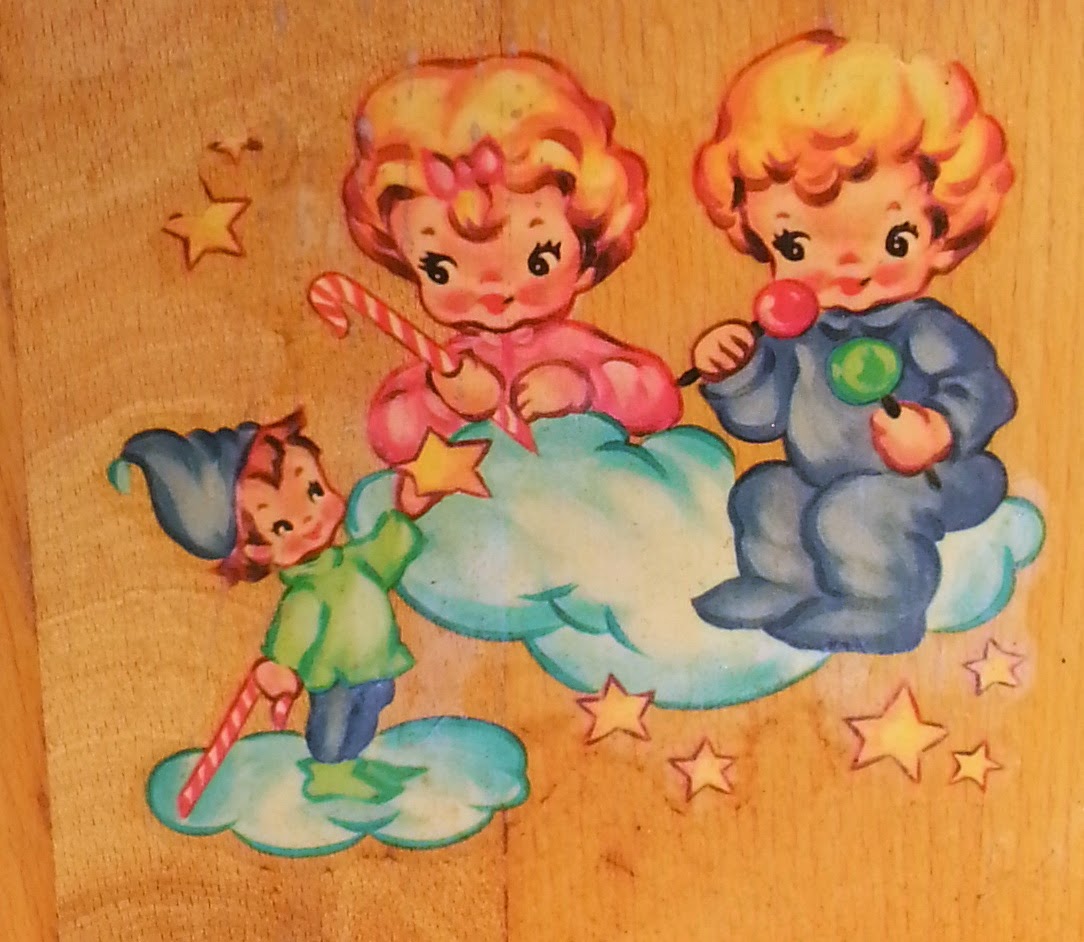 Sweet detail on the potty chair.

I found this window in the trash! 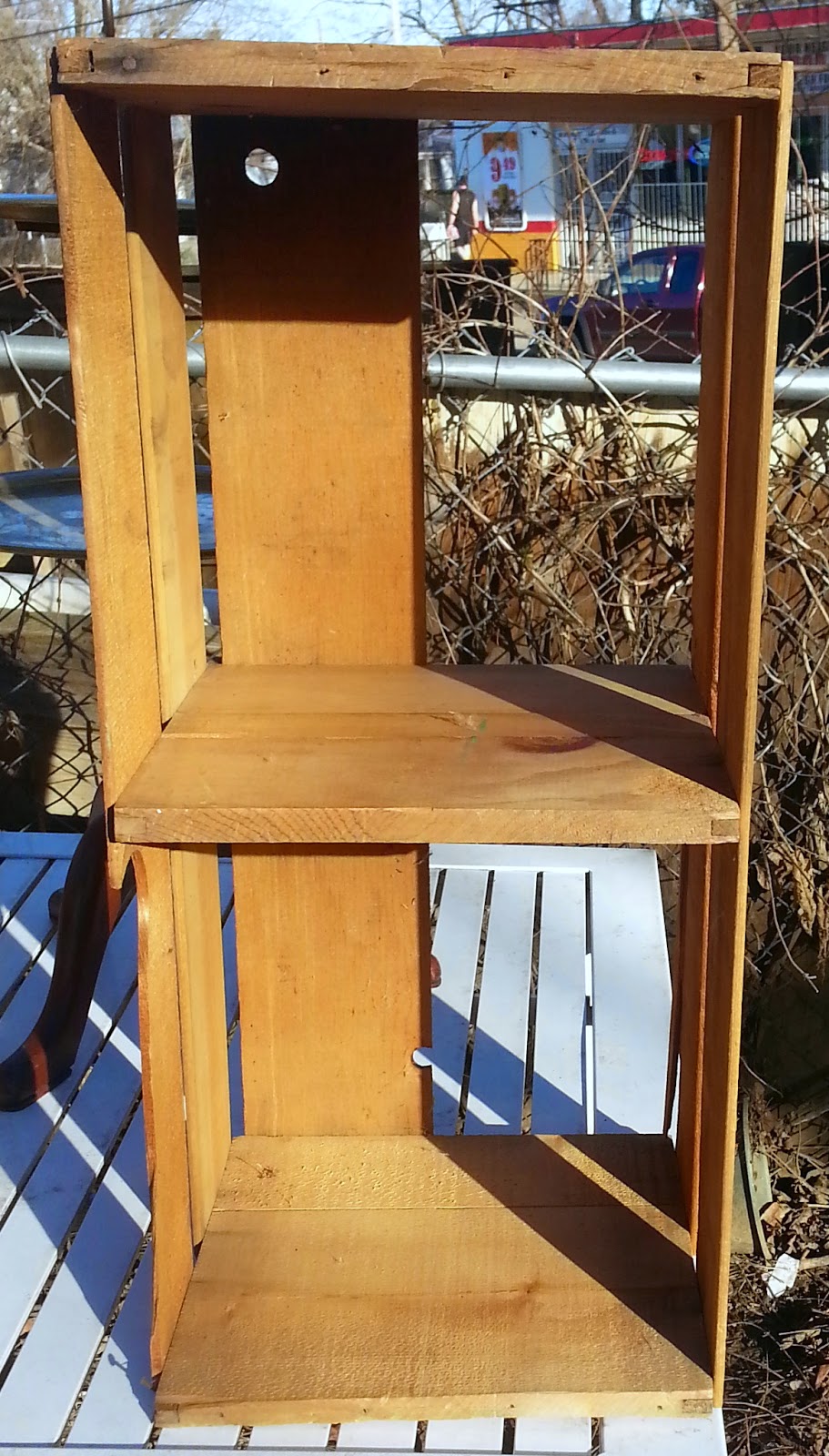 The fruit crate is missing one board on the bottom, but I can see someone turning it into a shelf anyway. 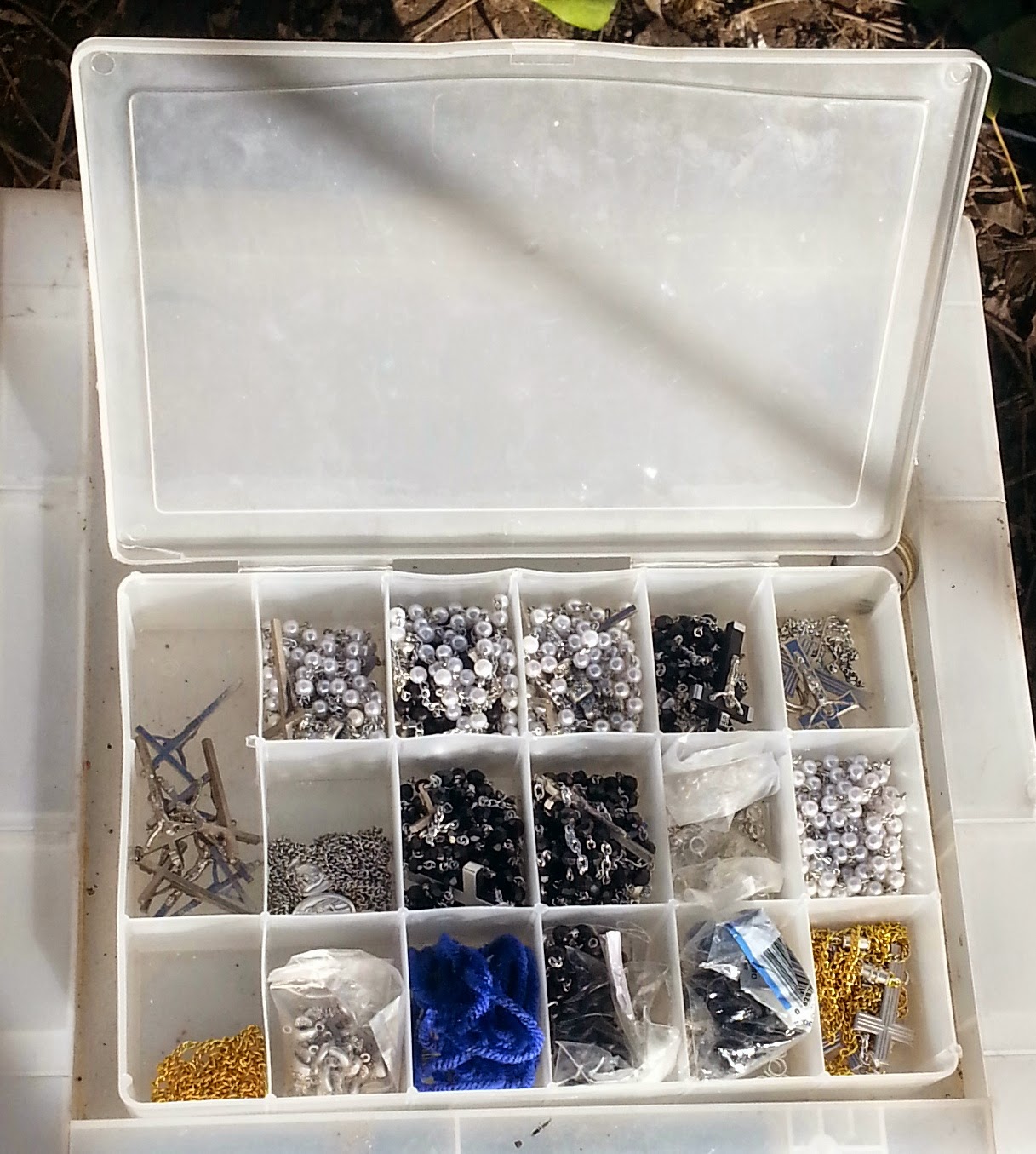 This is a rosary making kit.  There are thirteen complete rosaries in it, plus all the crucifixes, beads, and medals for making more.   I need to figure out a way to display them without everything getting all tangled.

I had never heard of the 4Thieves before, but I'm sure that vinegar was quite the 'Prophylactic'!!!

You find the most interesting things. I love the wood Madonna!
I need a thrift store fix.
hugs,
Linda

I never see religious stuff - or maybe I just don't 'see" it. You certainly have a knack for finding it! I do have a handful of rosaries that I have never known what to do with. I might need to fin them now!

A rosary-making kit - who knew. My favorite is the nursery rhyme plate. The Madonna's are keepers. So are the old photos - love them.

You found some great stuff. Love the wood Madonna and the blue one plus the one with child. Believe it or not but I have been to Fatima on our driving trip in Portugal!