Lo! There Shall Come....Church Sales!

Last weekend, we entered into the early throes of the yard sale season.  Two of the best early church sales were scheduled, the weather was warming up (despite the snow that was still piled up on the ground), and I was itching to go!

Let this be the first official Mazda shot of 2015:

One of the sales always has a huge gym full of stuff, with plenty to buy throughout the sale.  The last hour is their half-price sale.  I've gotten into habit of not showing up there until the last hour.  Actually, we get there about 20 minutes beforehand, case the joint, and wait for the half price hour.  This year, they had a lot of furniture left at the end.

The other sale is always better at the beginning than at the end.  Lots of good stuff, but it goes fast.  We had nothing else to do on Saturday, so I didn't want to get to one sale at 8, then wait until 1 for the good prices at the other one.  Since my main target these days is furniture and larger items, which is not something the early sale usually has a lot of even at the beginning, I decided to head out mid morning, to avoid the downtime.

I also found another church sale that would just fit into the time frame available, so we were off!

So what's in Mazda?  Well, for starters, an odd small book case.  What's odd about it? 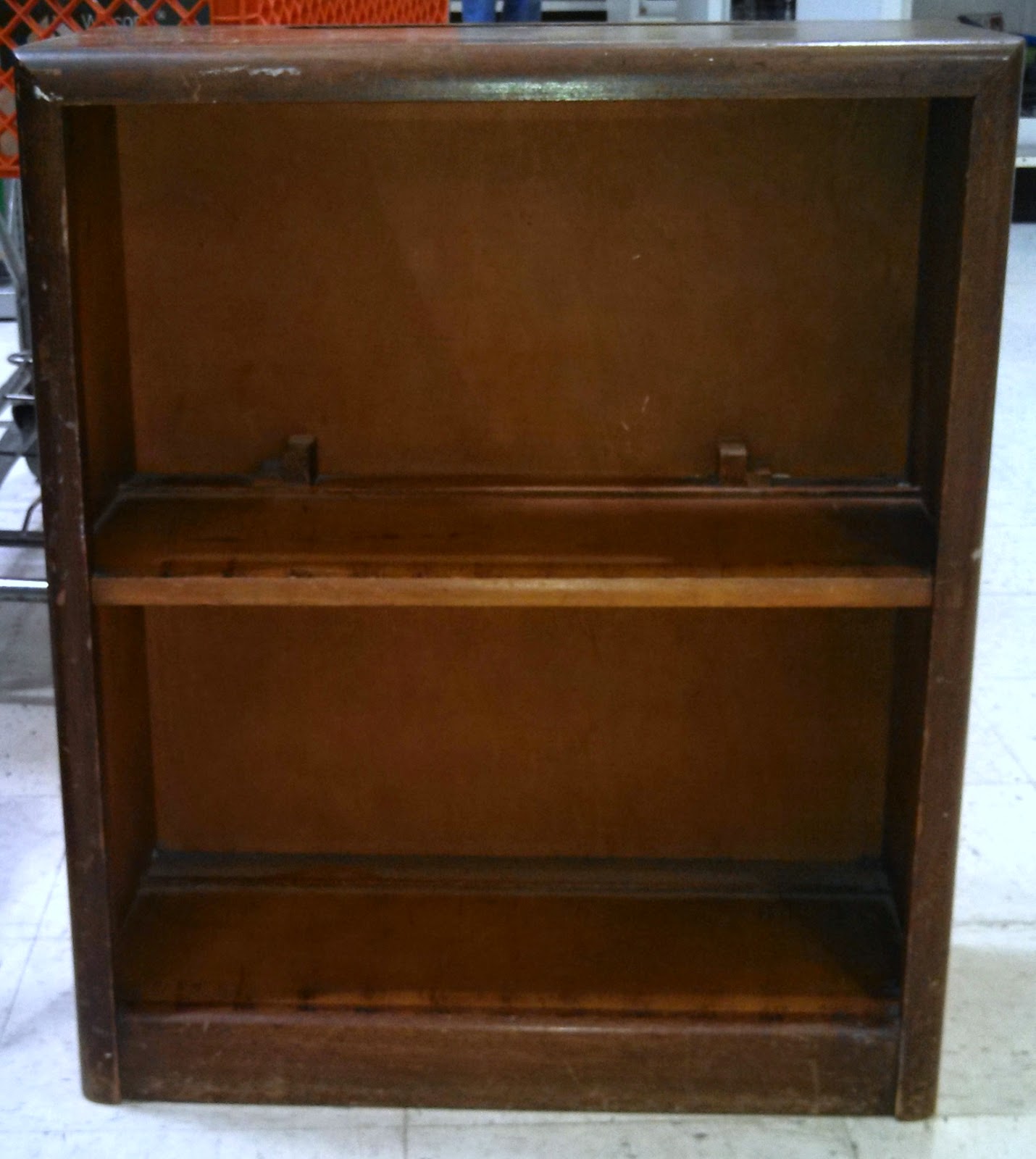 It has a slot in the top.

And this weird construction in the back of the top shelf.  The slot makes me think of old dot-matrix style printers.  Back in the day, office furniture had slots for the paper feed.  But the shelf is all wood and seems much older than that. (To me at least.)  So, I'm mystified.

I could not pass up this blue color, even though I know whoever buys this beauty will likely change that. 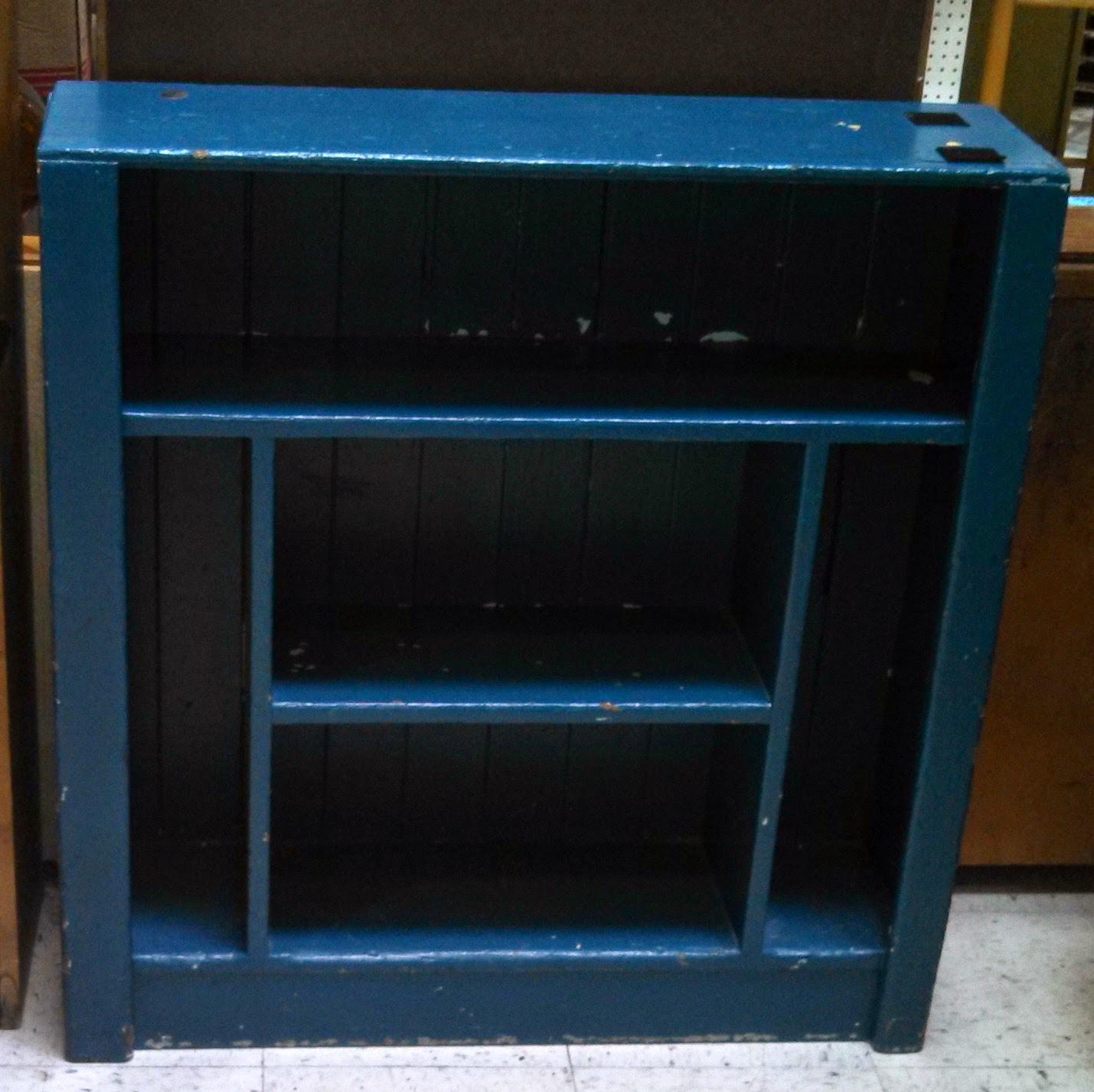 Both these chairs and the plant table were part of the load.  I have an unhealthy love for director's chairs. You can see bits of my new booth set up peeking around these pics.  I'll do a full reveal in a couple of days. 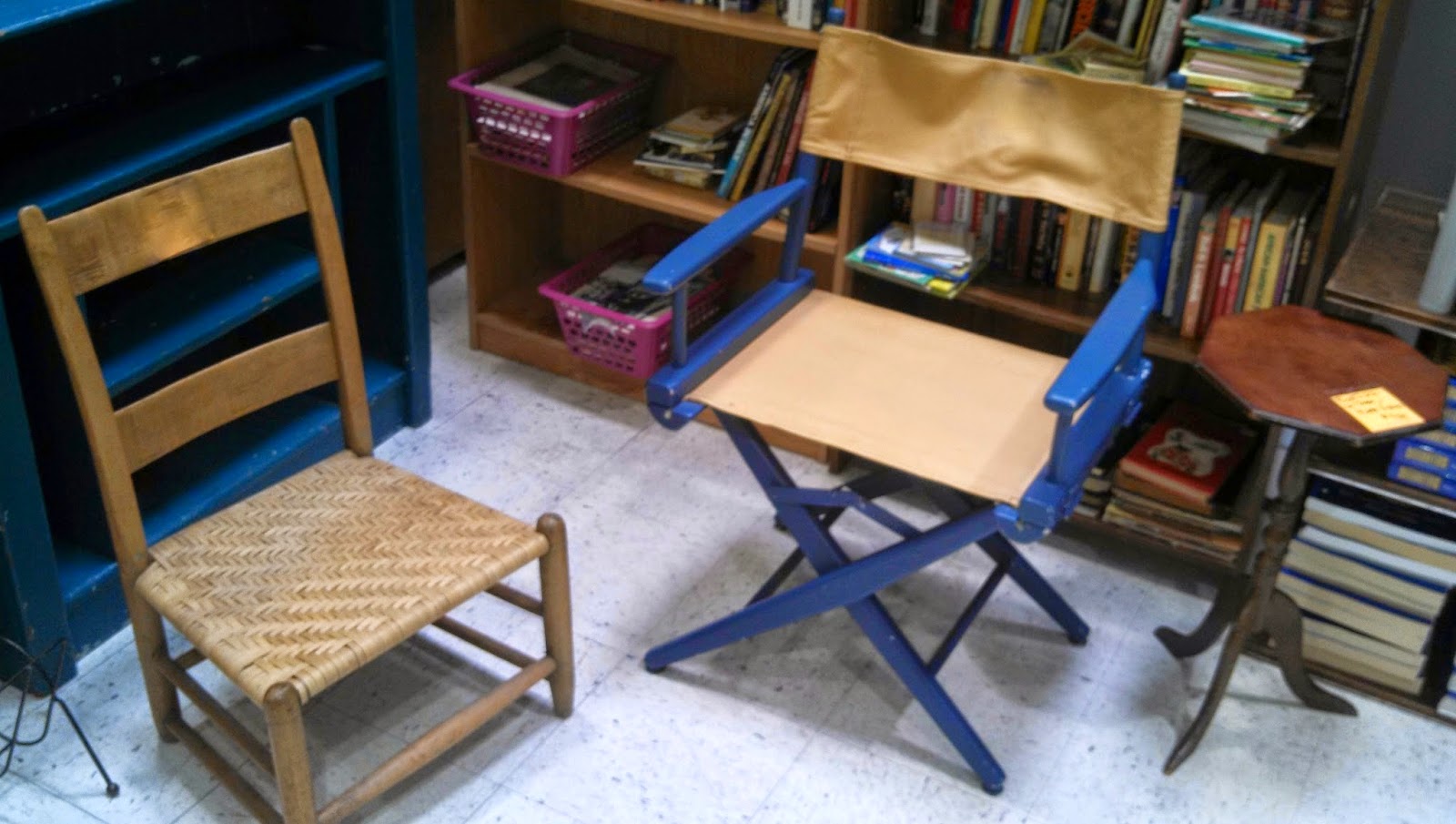 I almost passed on this toy organizer, until I saw it was Little Tykes.  That brand sells well for me. 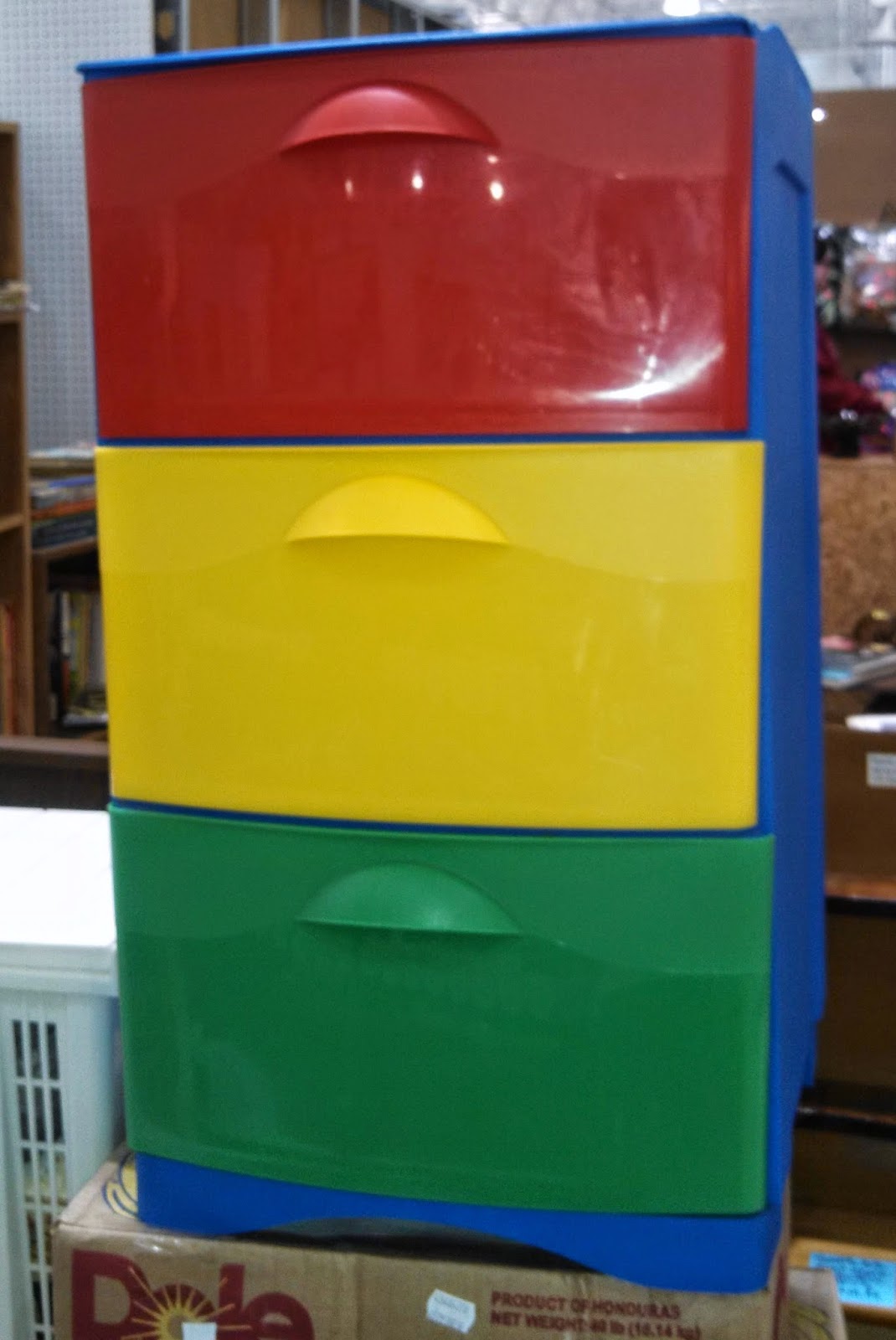 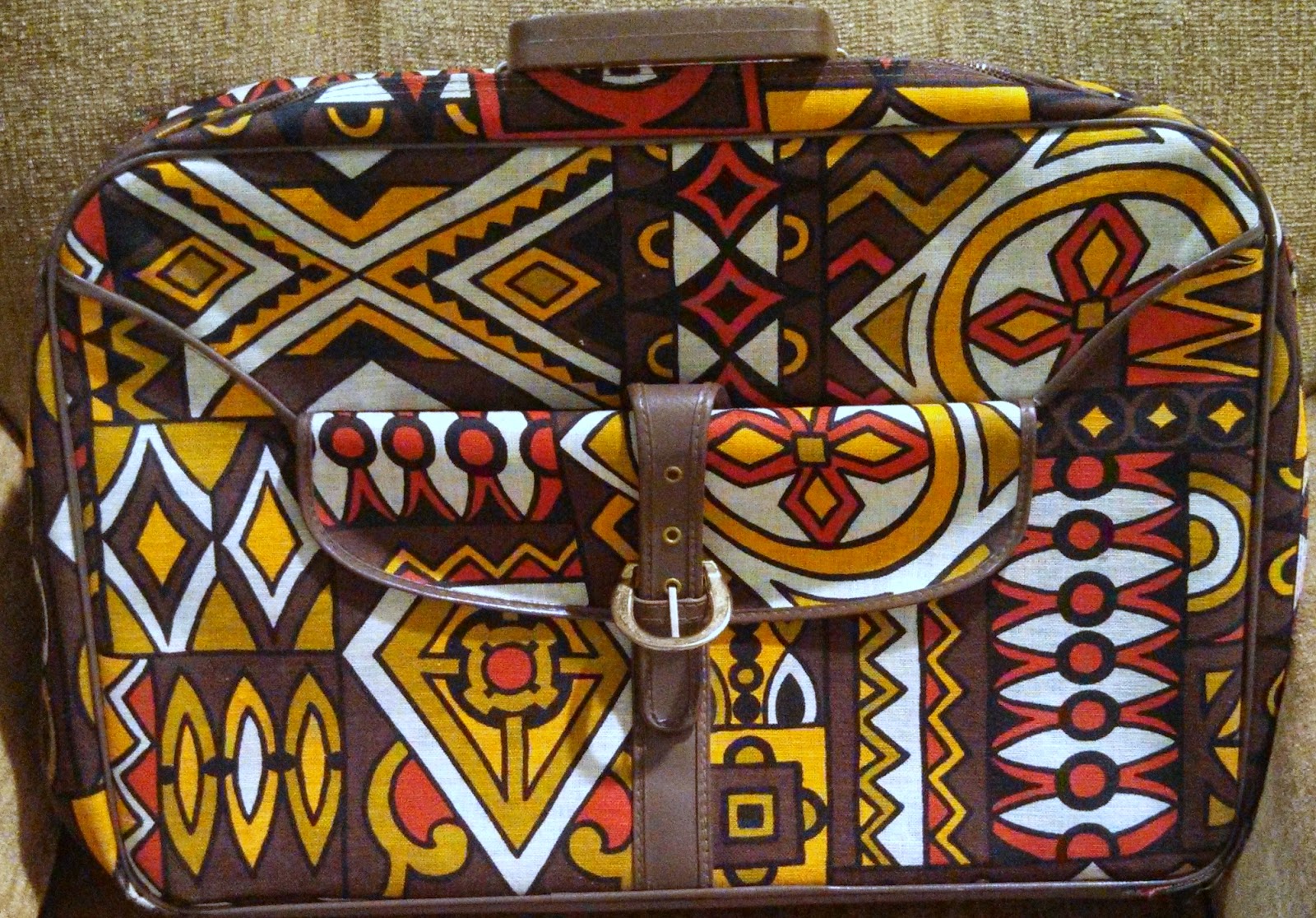 I'm not sure why anyone would have six (!) Our Lady of Fatima plates, but I almost passed out when I saw them.  Love.  Since there are six, I can sell five and keep one! Buncha smaller stuff.  I love anything with characters on them, so the BC pitcher was a no brainer.  I sold a bunch of BC glasses a few weeks ago.  They would have displayed so well with the pitcher.  Oh well.  The decanters held bath oil at one time. 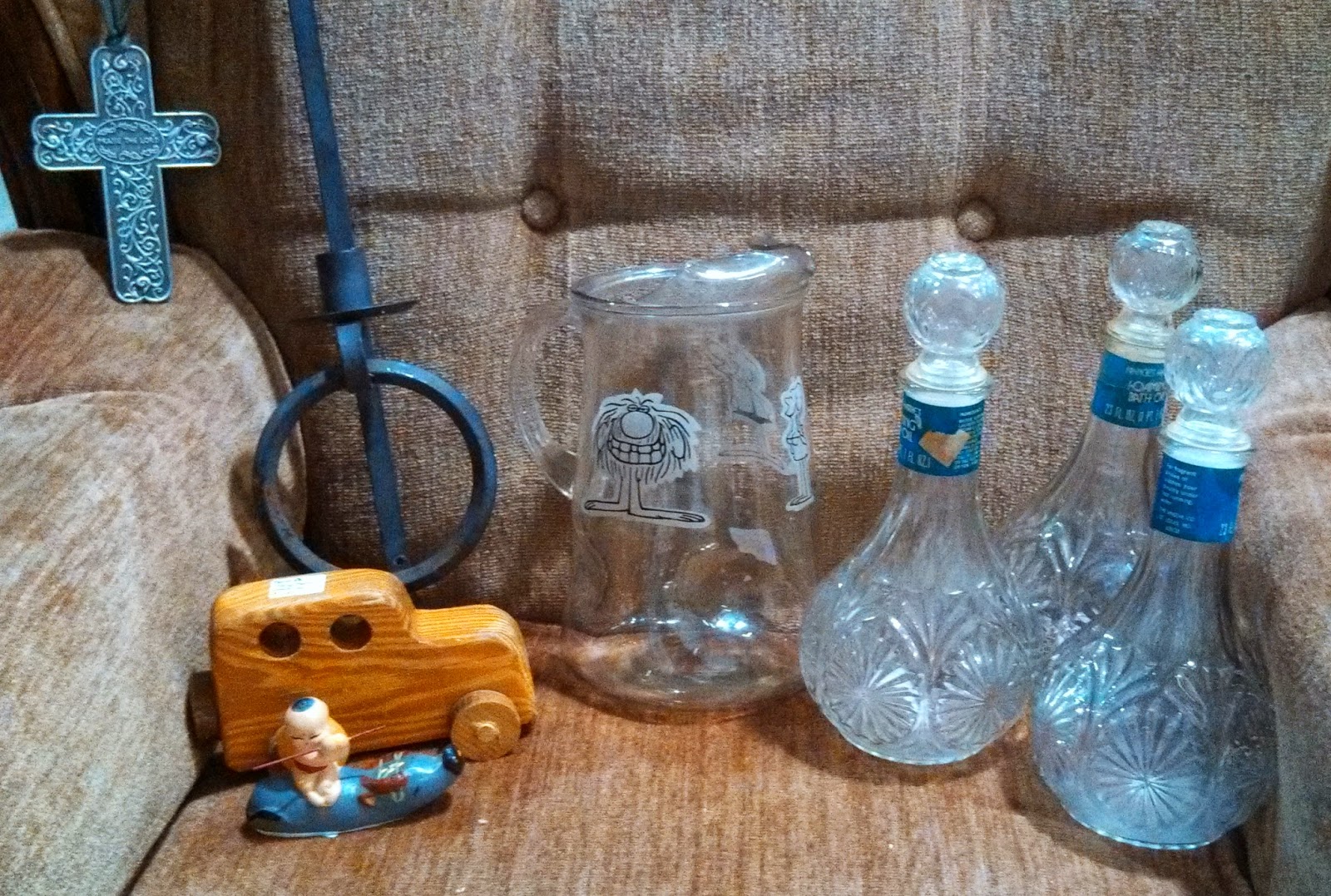 I have no idea what possessed me to grab that large wrought iron candle sconce thing.  It's not my usual vibe.  I think some other junkers are rubbing off on me.  There were some other smalls from this sale, but that pic didn't come out well.

These retro plastic hampers always sell for me.  The little bunny on the wagon went into my Easter display.  Two of the Bible story books on top I had as a child. 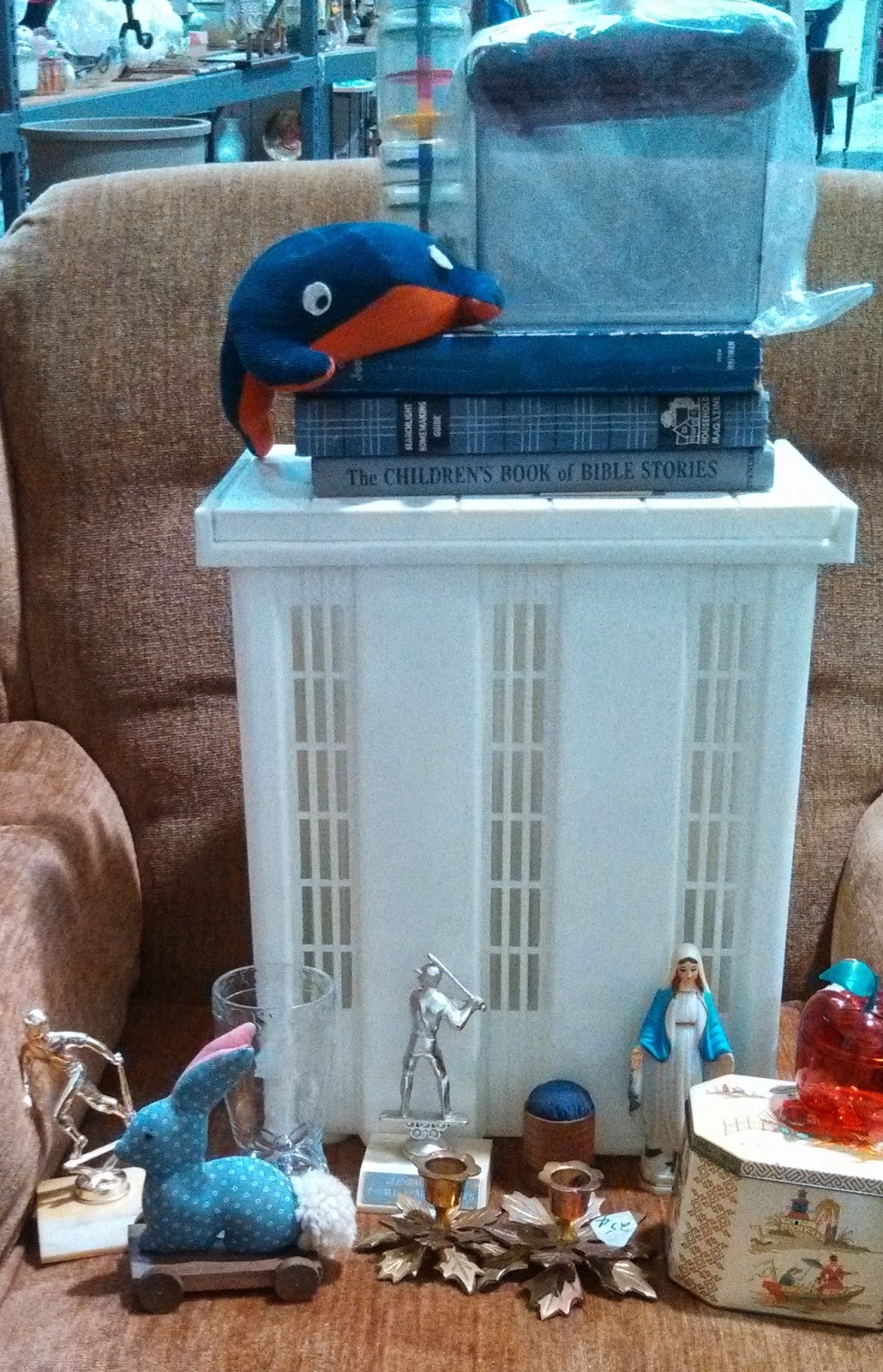 March seems about right to start pulling together Christmas stuff.  Those blow molds are not the least bit old, but they are sweet and will certainly sell when the time comes.  I always hop on the smaller size blow molds, since they are easier to store.  Same for trees.  I like to have 4-6 smaller trees for sale during Christmas.  This is the first one for the stash.  I already have an idea for making a Christmas tree forest in my booths. 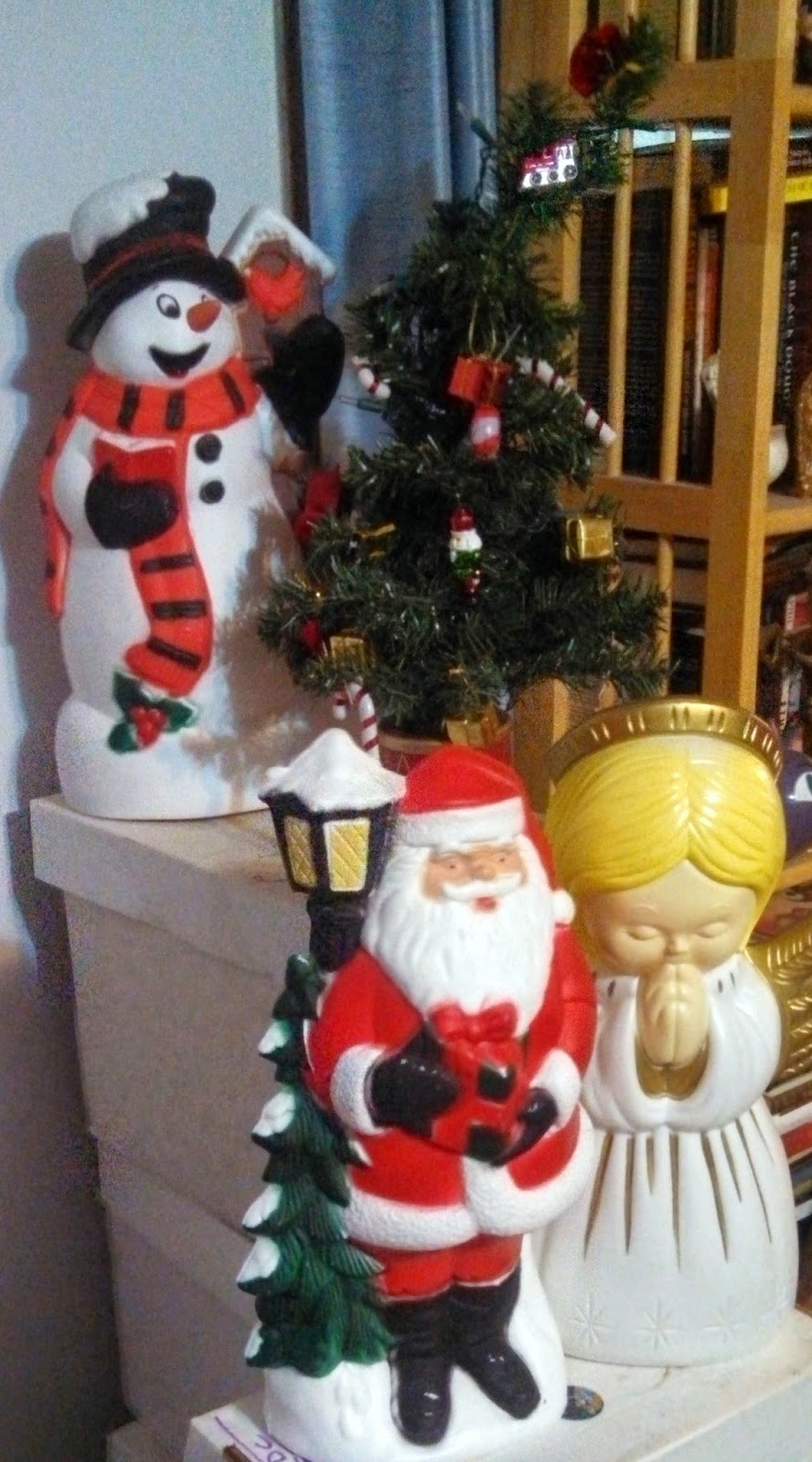 I've been doing some other shopping of late, as well.  I've been pretty lame about getting pics, but here are some recent thrift finds.  If I plan it just right and have the time, I can pass up to five thrifts on my way to the new store.  I feel like I just have to stop in at least one, you know? 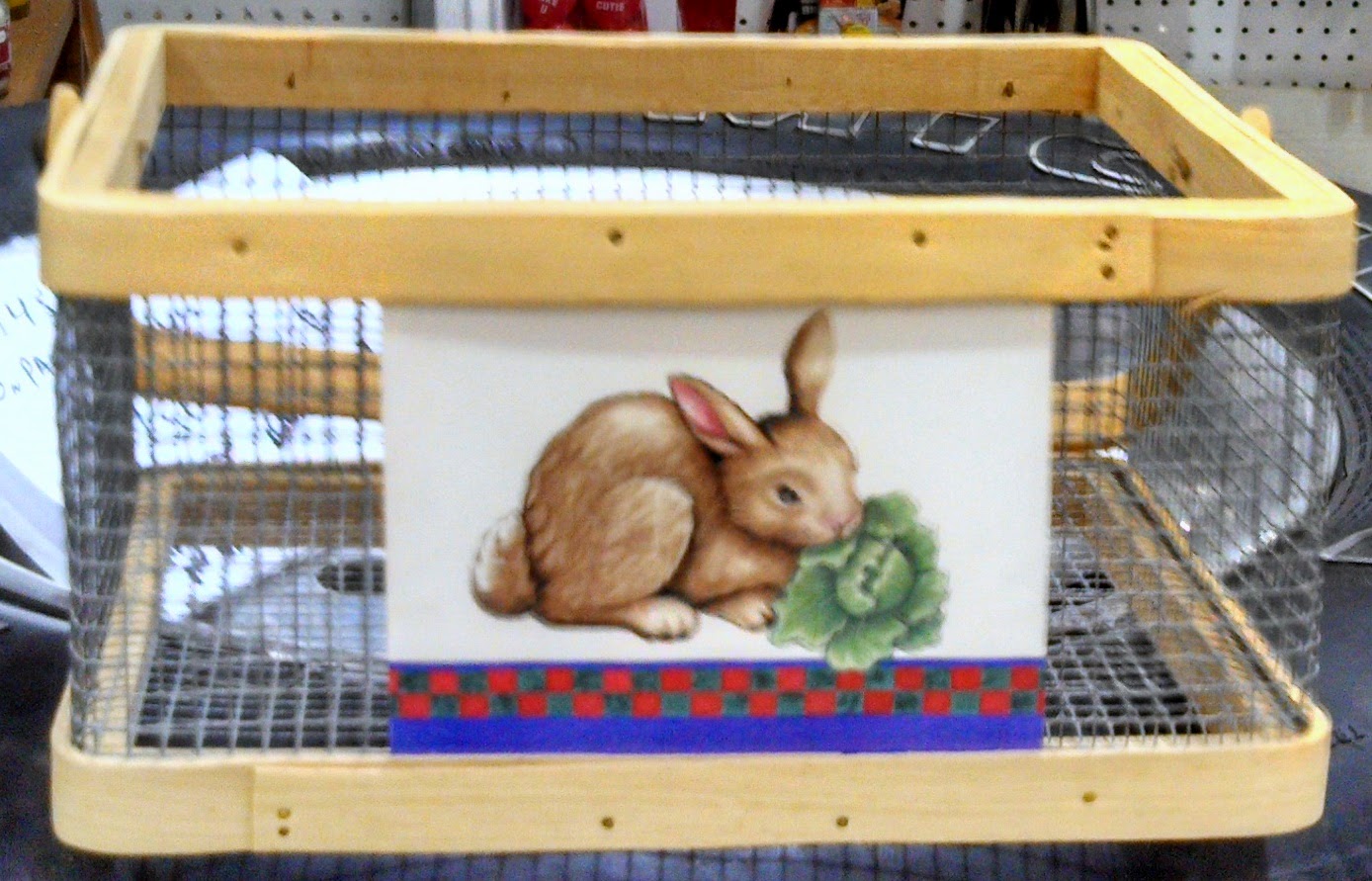 My Easter display is, for better or worse, done, but I could not resist this cute little chicken wire fellow.

These are modern cups, but the art style rings vintage to me.  Maybe they're some type of repro?  Either way, I could not resist coffee mugs with noses.  I wonder how many more were in the set? 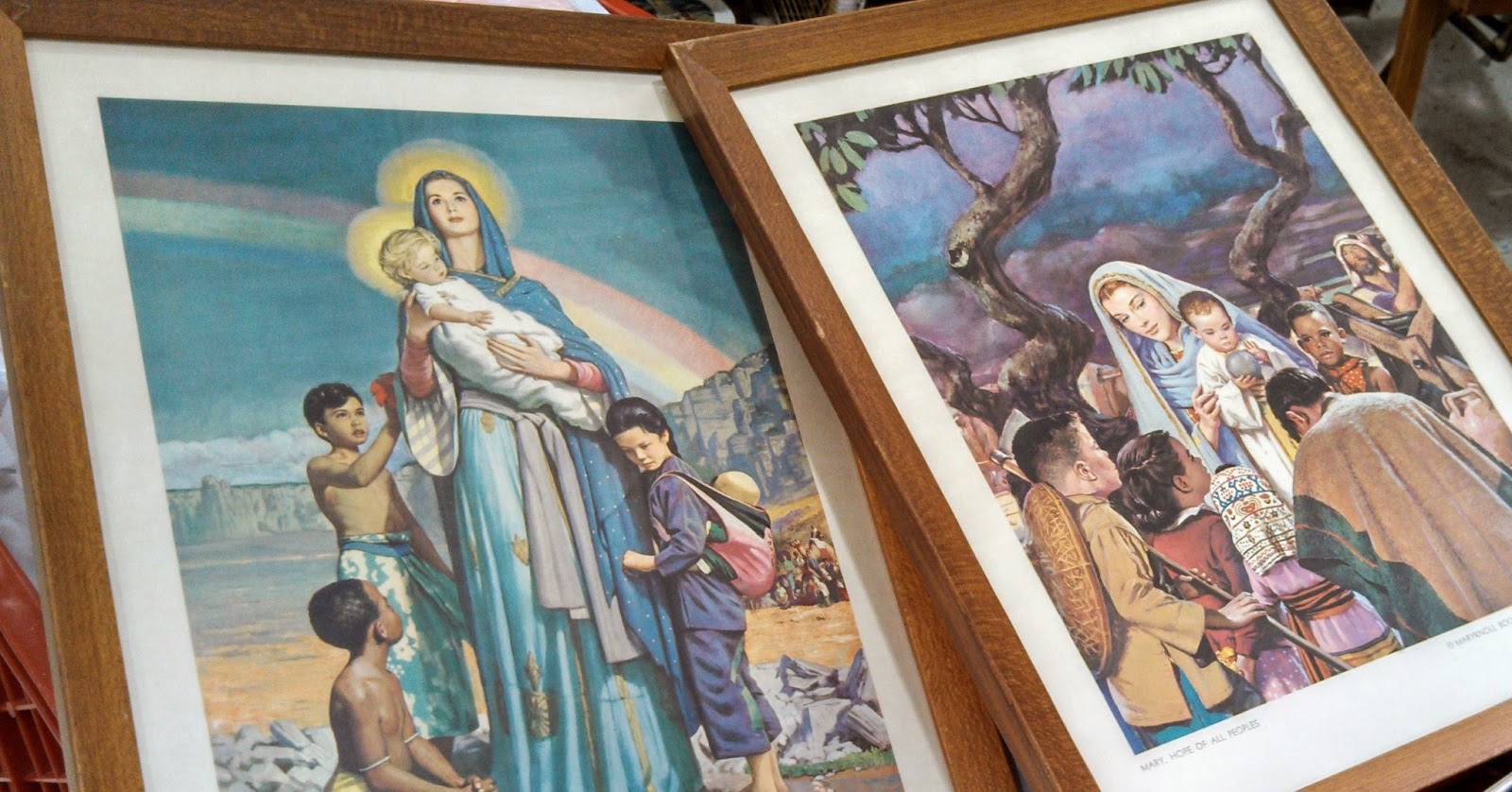 I am ga ga over these two vintage Catholic pictures.  The one on the right is titled "Mary, Hope of the World" and the left one is called "Mary, Mother of Mankind."  That's quite a head of blond hair the baby Jesus has, isn't it?  They're professionally framed and were sold from a religious goods store here in town that has operated since the late 1800's.  They were a tad more than I like to spend, but I could not resist. 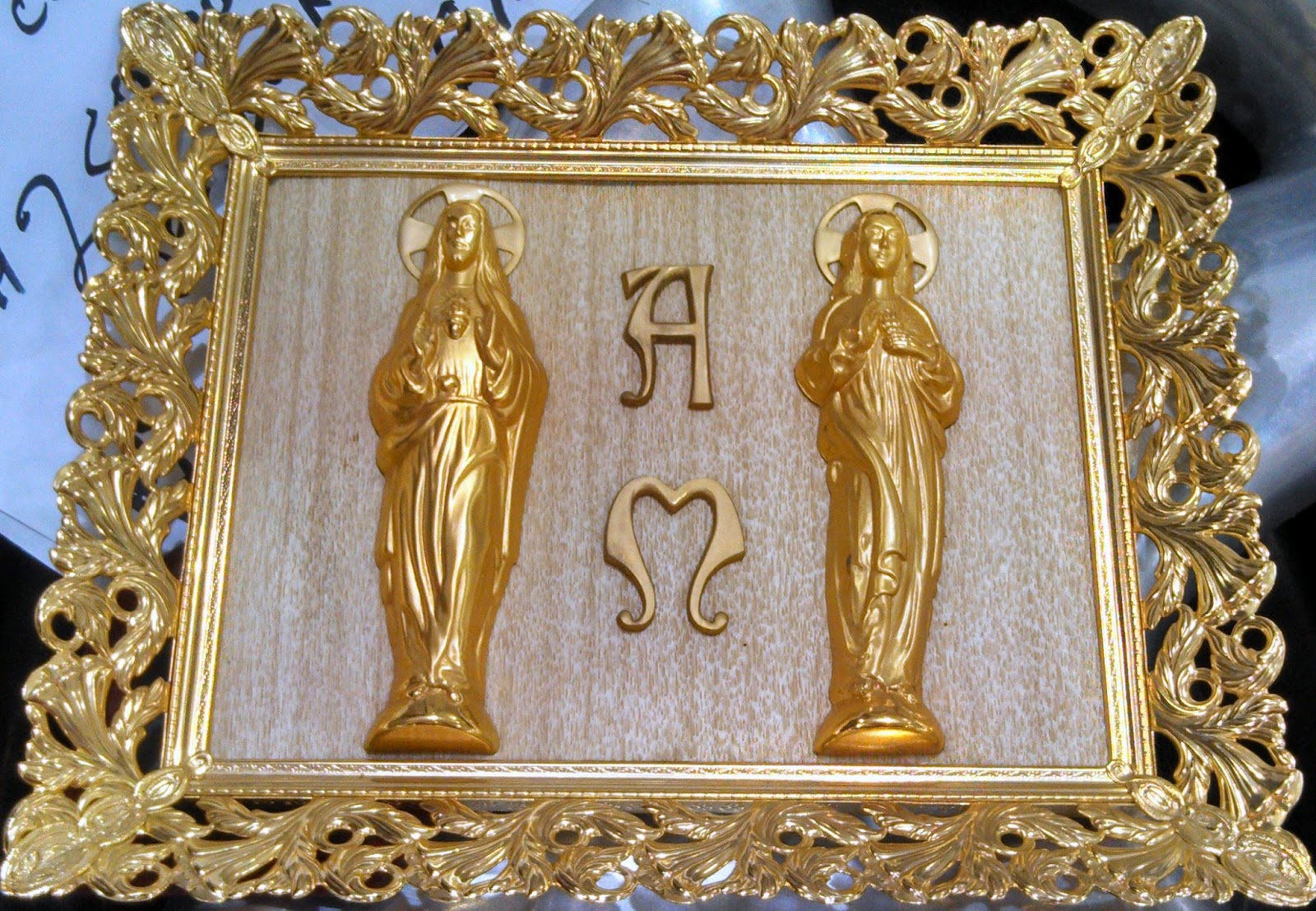 My favorite find lately has to be this gold framed plaque of the Sacred and Immaculate Hearts with the Alpha and Omega symbols.  Sweet!

I think I'm leaving something out...  What could it be?  Oh yeah!

I bought a blue bedpan!

Because blue bed pan!  I showed it to Keith and all he had to say was:  "Did you ever sell all those others?"  Well, yes!  It's not like I have a problem or anything.

soooooo jealous!
I WANT CHURCH SALES!!
THANKS for sharing ;-) !!

The bookshelf is for a set of encyclopedias. The atlas goes in the slot.

No sales here yet... Too cold and still tons of snow. As for the iron candle holder... An antique dealer once told me the hardest thing about selling vintage was buying what you hate and selling what you love! I think you've hit that milestone. You got some great stuff...

Church sales! I'm going to try to find some this year and splurge!! I see pmj told you the bookcase is for encyclopedias and the atlas goes in the slot...we had a set growing up. I love the blue cabinet! You do find the funkiest things! hugs to you and more junk please!!

You do find the best stuff Eddie. Love church sales. I am so glad the garage sale season is starting. Still very slow in my area.
Joy

Our church are in the fall. No fair! Red geraniums in the blue bed pan!

I also have a shelf with a cut-out on top. I would figure they would have been used in the 40s or 50s, or even earlier. There was electronic communication back then, like teletypes, telex, telegraphs, etc. These probably used a continuous roll of paper that was ripped off after the message came through and stopped. I would love to know for sure, though.

Contact me if you still have the book shelf for a sob story.