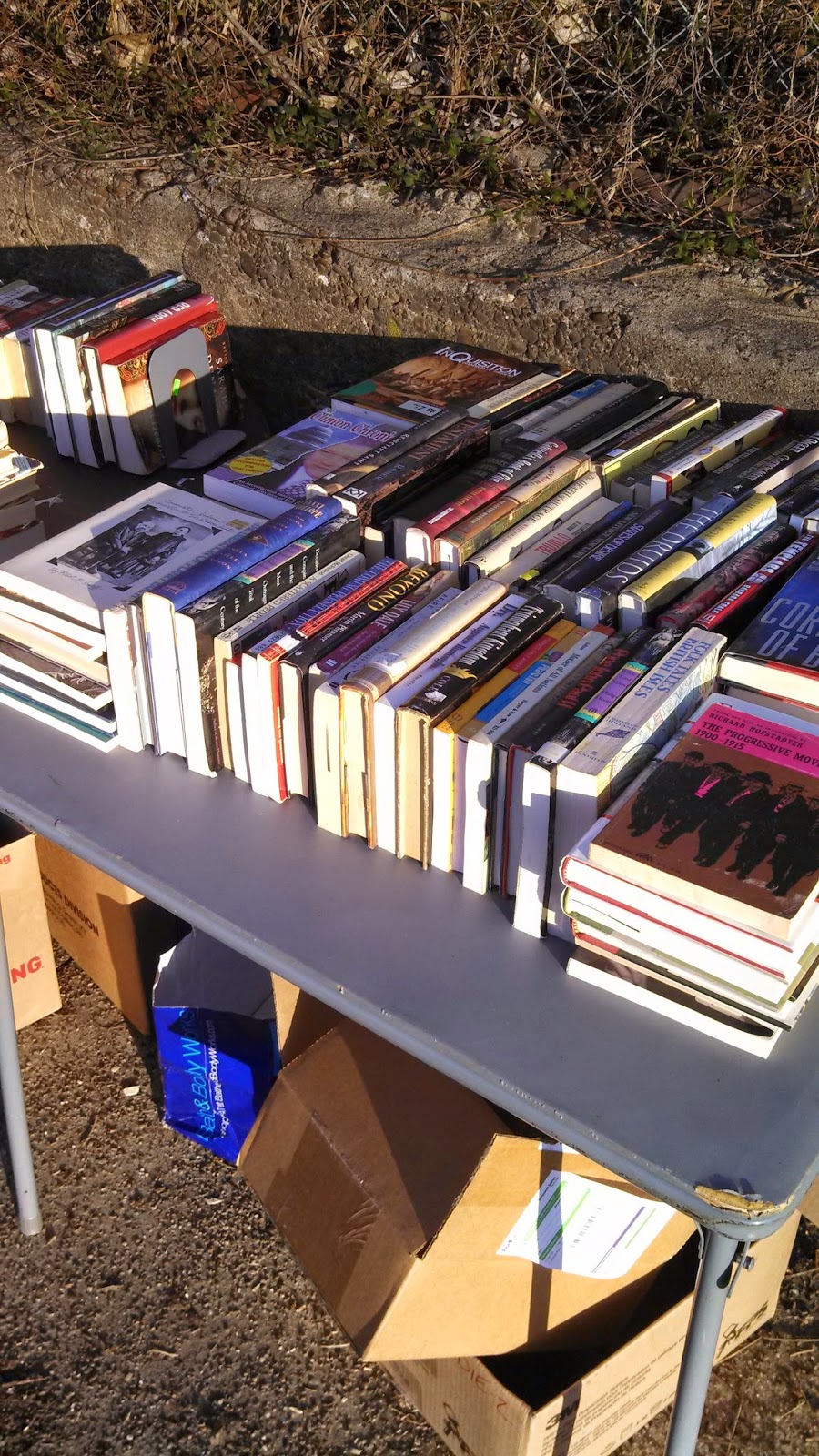 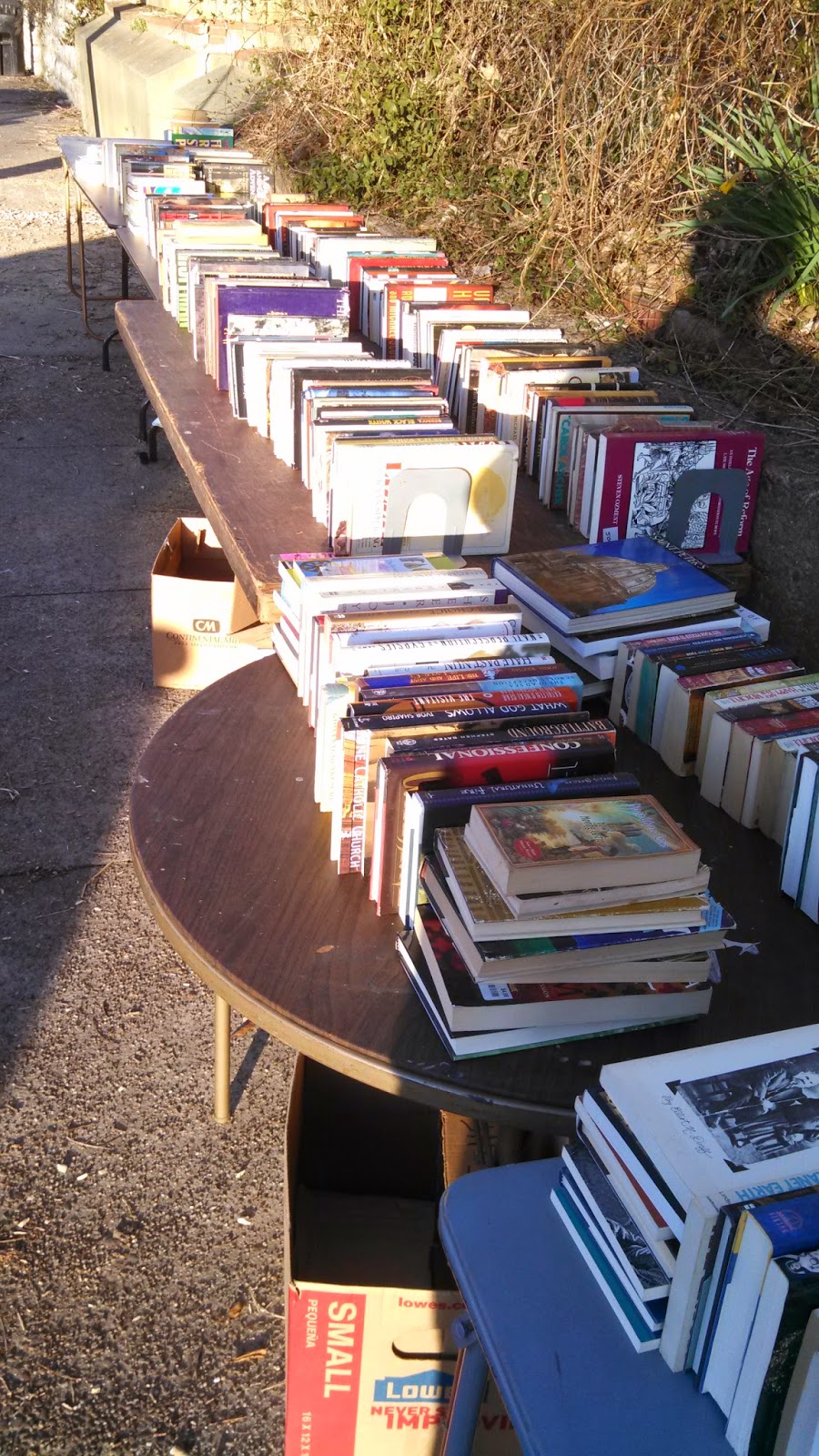 
The dude in charge.


I forgot to take an after pic, so you'll have to take my word for it, but there was nothing left.  Not a book.  Not a page.  Not a word. It was all sold!

People were buying them by the stack and by the sack.  Some people brought their own bags and filled them.  I had some boxes for people who bought a lot and ended up using quite a few of them.  Even the postal carrier walking by on his route bought a couple books.

There were a few dealers that came by, but most of the folks were actually readers.  I had a long visit with one woman who sells on the side, but is also a book lover.  I only had two dudes show up with scanners, but they stayed polite, so I let them stay.  One of them said to the woman  I was talking to:  "I don't know how you pick what you're going to sell."  We both just rolled our eyes at him.  He tried to talk to me about the virtues of selling books online and how great his little app was, but I just tuned him.  I've dealt with this guy before.  I've also seen him at a couple of community sales trying to sell the books he had bought from me for less than he paid me for them.

Based on the subject matter of my books, I had an awful lot of interesting conversations with people.  One woman finally stopped and said, "So are you Catholic or are you Jewish?  I can't figure this out."  The look on her face when I said "Neither." was priceless.  I just like to read about a lot of different stuff.  I didn't bother to point out to her all the books on Wicca and Paganism.  Several people told me that I would be an interesting person to have coffee with.

My favorite part was making recommendations for people based on their selections and complimenting their choices.  A lot of people got a lot of good reads and that makes me happy.  This is the first sale I've ever had when just about everyone who came bought stuff.  Really.  Even the guy who was there at the very beginning, but left without buying something.  He came back towards the end and bought two books.  He was disappointed that the other things he had looked at were gone.

The guy from the secondhand store down the street came by.  I had sent him an invite on Facebook and kind of hinted that I would be open to an offer on the remainders after the sale was over.  He bought two boxes on his first visit.  After the sale was over, I pulled some of the religious books to take to the booth, then he made me a decent offer on the remainder, so I took it.  And, BAM!  No more books!

My scan on Friday was a nightmare.  First off, I got there and they told me that my appointment was actually for Thursday!  Still not sure how I managed to mix that up.  They told me they would work me in, so I checked in and waited.  It didn't take them long to get to me at all, but the we found out that my port seems to be clogged or something.  They could not get a blood draw from it, so they could not use it.  I'll have to get that checked out.

We had to go into my crappy veins.  Thankfully, it only took two sticks.  Then I got scanned.  I'm starting to feel like an old document.  I go to get the results tomorrow.  I'll let you all know what happens later in the week, after I've had the time to process it.

Booth sales have been decent this week.  A couple of days have been excellent, others have been okay, and only one was below satisfactory.  I'm not going to make my initial goal for the month, but I will have the best month ever at this store.  That's good enough for me right now. Someone even bought my stalker!
Posted by EM at 3/30/2015 05:00:00 AM

Wow! What a spread! Glad to hear it was a total success! It looks like you had a nice day for it too.

First - glad the stalker sold - he was creepy. Wow, I would have went wild at your book sale. When I go to book sale events, I always find it interesting at the different types of book buyers. Some know just what they want, grab it, and leave. Others like me crawl along the floor reading a chapter or two to determine if I have read it or looking for the hidden treasure - old textbooks.

So many books and all sold! Yay for you. I love books. Glad things are going better in the booth and so happy the stalker is gone!! Waiting to hear about the scan results and fingers crossed, prayers said for good results.
hugs,
Linda

Infinity books and they are GONE. You made a lot of people happy. AND you cleared out a lot of storage space. No rain, no snow. No one left in the booth to look over your shoulder. 'good enough' sales (which are way better than 'not good enough'. Blood work and scans and then waiting a bit. That was a BIG post. Hugs.
Joy

I'm glad all your books and stuff sold. I like books. I have a Kindle, but it's just not the same.

The mind is a great philosopher. And life is not a philosophy, life is a reality. And philosophy is an escape from reality; philosophy means thinking. Life is, there is no question of thought. You can simply jump into it. You can simply experience it. Visit my site for more information.Thank you.

I really enjoyed reading your article. I found this as an informative and interesting post, so i think it is very useful and knowledgeable. I would like to thank you for the effort you have made in writing this article.

An impressive share, I just given this onto a colleague who was doing a bit evaluation on this. And he in reality bought me breakfast because I found it for him.. smile. So let me reword that: Thnx for the treat! But yeah Thnkx for spending the time to debate this, I really feel strongly about it and love reading extra on this topic. If potential, as you grow to be expertise, would you mind updating your weblog with more particulars? It is highly helpful for me. Huge thumb up for this blog put up! casino slots