I've graded all the responses to the Booth Math post and I am happy to say that not only did everyone pass, but you all got an A+!  Your teacher is just an old softie and cannot bear to disappoint anyone with a low grade.  Even people that didn't hand in an answer got an A+.  Heck, even people that weren't in the class got an A+.  I'm just that kinda guy.  (I tried to give A+'s to people at other schools, but they wouldn't let me.)

I thought you might want to see how things turned out.  The first pic in the Booth Math post was the panic booth I rented when the Dixie store was closing.  It had operated as a dumping ground all through the move out in January.  I had just started to tidy it up, when we got snowed in during mid-February.

I was kind of sad to give it up.  It had an ideal central location and great visibility.  I never really got a chance to implement my vision there.  It had these bare cinder block walls, with a couple of panels of pegboard mounted at the end.  I had planned everything around the cinder block.  All my shelf purchases during the store closing were things I thought would look cool and "rustic" against the bare block.  I was planning to experiment with the pegboard and try hanging some shelves on it for an attention getter.

I never really got to start any of that, but I think I got a better deal.

The second pic was my already existing booth in this store.  When the new space filled up, I had to resort to dumping in this spot.  Clean up was slow going, and so were my sales.  The store manager called and offered me a booth swap:  the end booth on the row where I already was in exchange for the bare wall booth.  There was a carpet vendor looking to come in, but he needed a solid wall to lean his rolls against.  The end booth had just opened up very suddenly, so it was a win-win for everyone.

Besides having my spaces on the same aisle, starting with the blank booth in the third pic gave me the chance to build my second booth from the ground up, thoughtfully and deliberately, which is the way I like to do things.  It would have taken me longer to dig out of my panic mess at the other spot than to create a new space.

I'm breaking new ground for myself here.  I have never had a booth with this much visibility before.  It is seriously one of the first things you see when you start shopping in the store.  I figured my usual "cram it in" approach was not going to work here.  I needed to make...gulp...displays.

I don't like a booth that looks too curated.  To me, the more styled a space is, the less likely there's going to be anything there I can afford.  I much prefer an organized, cluttery ensemble of items.  I've tried to strike a balance between the two with this space.  Its main purpose is to showcase my books (organized clutter) and my furniture (limited curation).

Let's see how well I did.

I lined the aisle with bookshelves pointing outward.  Behind these I put another row facing inward.  I am trying to limit the items that go on the outward facing ones to larger smalls, so that a shelf will be easier to unload if someone wants it.  The inward facing shelves hold the books and help keep them organized (sort of).

There are a few more tweaks I want to make, but I am pretty happy with it.  I need to being in another large piece or two.  It looks a tad too bare.  I think I've hit up a winning formula here.  I've sold a lot of large furniture pieces out of this space in the past week.  A lot.

The other space is just down the aisle from this one.  It maintains that cluttered "old man junk dealer" feel that I like.  I actually do have an organization scheme for this one, but it's in the nascent stage.  It will take a few more weeks of careful refining to bring it to fruition.  This is actually a very hard look to pull off just right.  There has to be an organization scheme, but it can't be too noticeable.  I'm working on it. 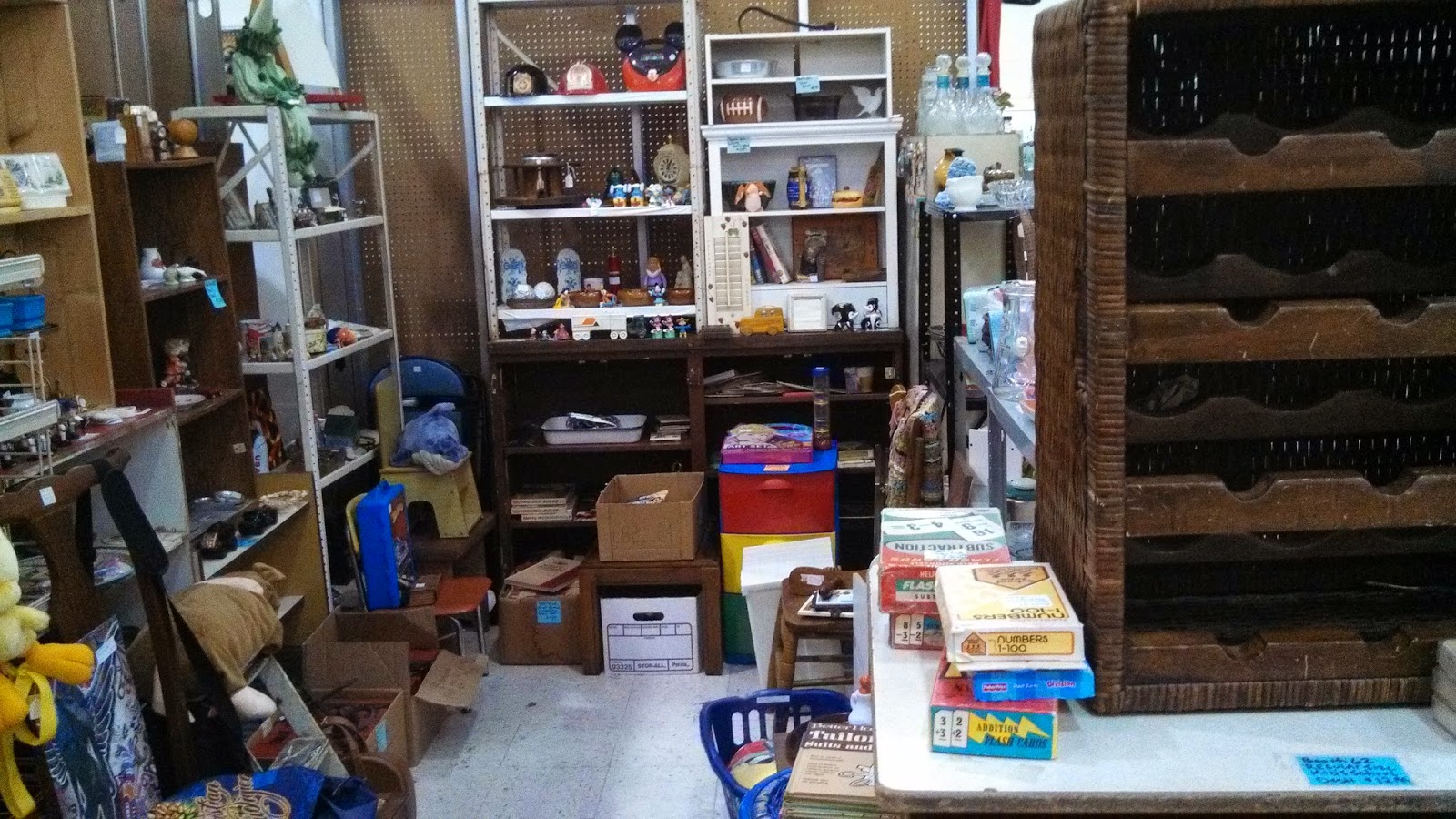 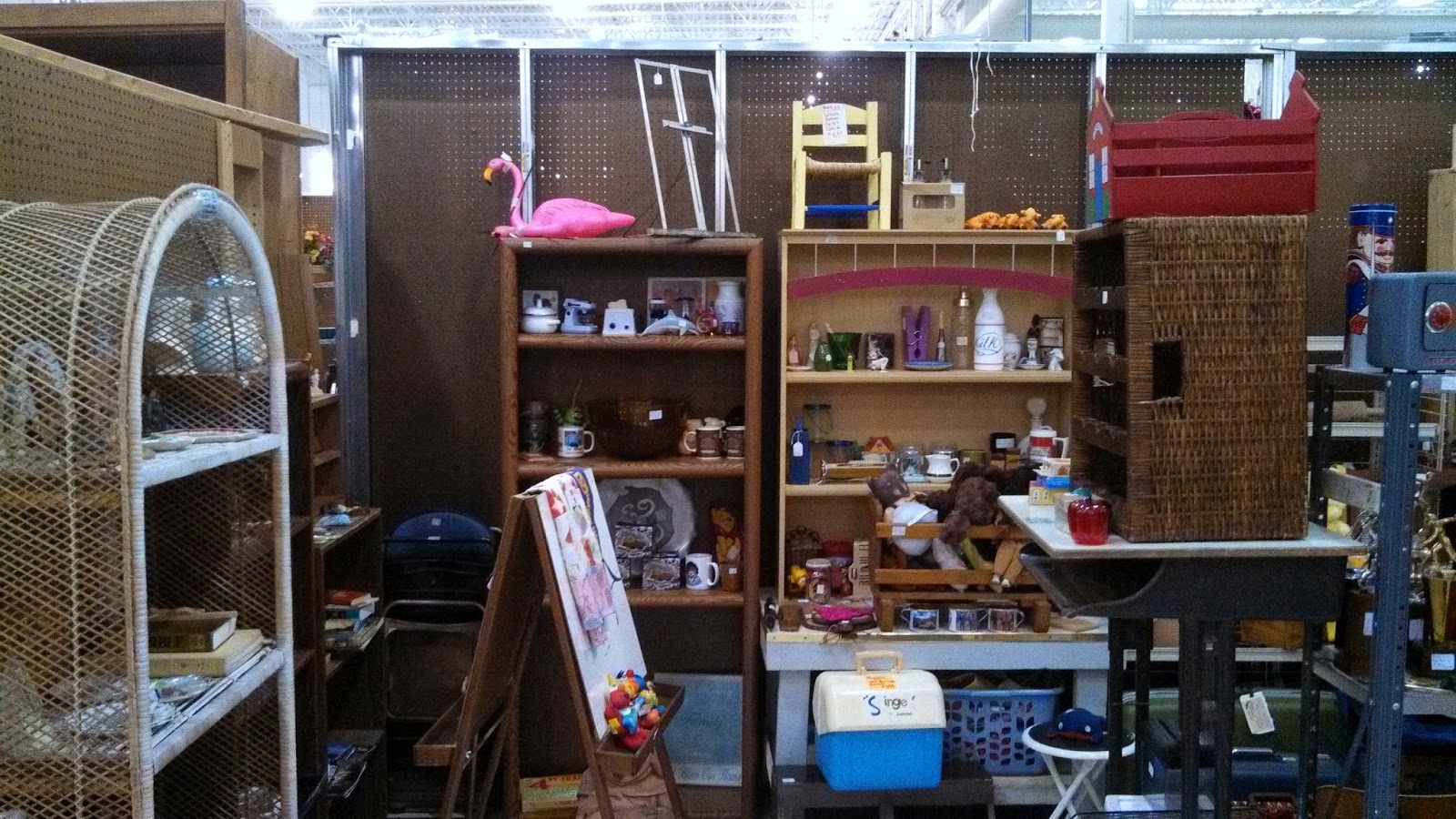 I have my religion section started, and my toy section is sort of brewing.  I'm struggling with how to incorporate my comic books into one of the spaces, since they do take up a lot of room.

I guess it's a work in progress.  But aren't most things?

Email ThisBlogThis!Share to TwitterShare to FacebookShare to Pinterest
Labels: junk, the booths

Eddie, you're the one who deserves an A+. Wow! You did so much work and it really looks terrific! I spy a piece of furniture my mom had. I think it's called a dough box.

So much progress in the booths and they look great! I think you will do well with the great exposure in the first one! Thanks for the A+ it's been awhile since I earned that grade!
hugs,
Linda

Very different looks between the two spaces. How great to have a corner with two open sides - putting the bookshelves back to back sure gives you flexibility. Looks like you are getting lots of customers and with the very fair prices you charge they will be repeat visitors. Hope you post more pictures as you add stock. A+ appreciated and back at ya.
Hugs,
Joy

They look really nice! We have way too much in our booth, and it looks messy, I think. Yours, on the other hand, look well-organized, tidy, and easy to move around- and shop - in. I need to get busy........

What an inspiring 'Professor' ;-) J has just signed up for our First.Booth.Ever... and there is SOO FREAKIN' MUCH work involved!! You Rock!!

What a great showcase booth you have created. It is both eye-catching and inviting. Of course I love the old man booth - a plunderosa! AAA+++ (Extra credit given for inventive styling!)