Well, it was supposed to be a Mazda shot,but we were in such a hurry yesterday that I had everything out of the van before I realized that I hadn't taken a pic.  Will you settle for a "(Part of) What was in Mazda?" picture? 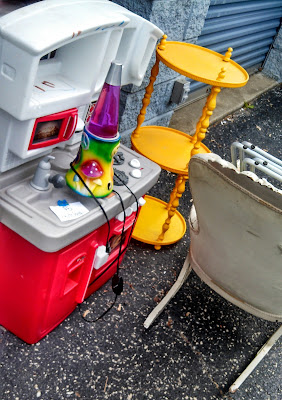 If one's plane doesn't leave until 4 and one has to go to the post office to get one's mail held, then it is expected that one will stop at the yard sales along the way.  Isn't it?

There was this sale on a little out of the way, hard to get to back street in our 'hood that was loaded with goodness.  How out of the way?  We were the first ones there and stayed almost 45 minutes and no one else came up.

How much goodness?  Filled Mazda quick, simple and cheap. Lots of vintages. Lots of kid's playsets.  Lots of Melissa and Doug toys.  Lots of lots. That lava lamp is vintage.

The crowning jewel was this table. 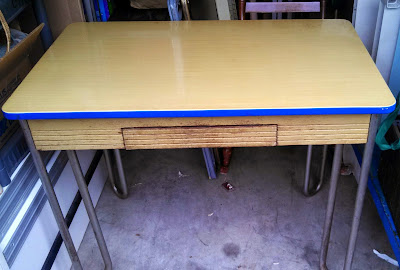 I've never seen a metal top table with that color top before.  I'm kind of in love with it!

And you all thought you wouldn't have a Mazda (sort of) pic.  Who loves you baby?

Well, I'm still kinda lagged from the three hour time difference, but we've gotta hit the streets of San Francisco and wear some flowers in our hair. Or something.

That table is a fab find! Love the color!

Loving the 'Mazada' shot and hell yes to that table! Enjoy SF!!!