Moving down Aisle 6 from the Endcap Booth and passing two not very well-tended spaces on the right will bring you to my final double spot, which I refer to as the "Aisle Booth" because, well, it's on the aisle. 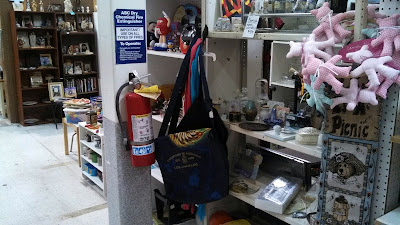 This is the view coming down the aisle.  This booth starts with those pink bears and runs to the brown bookcase in the distance.  I hate having that pole right there, but there's nothing I can do about it.  I have almost knocked that fire extinguisher off that pole more than once.

Here is a more head on view into the booth. 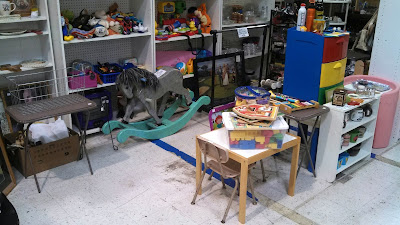 This is kind of my catchall booth for stuff that doesn't work in the other spots.  It's also my spot for the oddball and eclectic.  It's also my problem child.  I'm just not happy with this space right now. You'll see why in a minute. 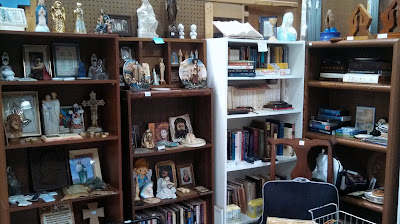 This is the home for my religious section, which includes religious books and media.  I would love to work one more shelf in here for religious stuff, but I can't think of a way to do it without violating the laws of time and space and causing the universe to implode.  I'd hate to end up floating in the timeless, spaceless quantum void and have one of you drift by and say:  "Way to go.  You just had to try and put one more shelf in there, didn't you?"


I have a few pieces of small furniture in this booth, mainly overflow from the Endcap Booth.  I am toying with the idea of grabbing a bunch of chairs and such out of storage and going whole hog with them in here.  Can you really have too much small furniture?  Maybe I could put more religious items on the small furniture, thus eliminating the need for another shelf!  Huzzah!  The universe is saved!  I am a hero once again! 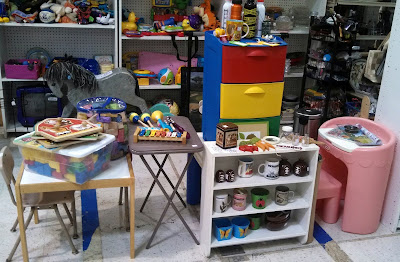 This is also my spot for kid-sized furniture and large toys.  And non-vintage, non-nerd toys in general.  Toys are fun, but, man, are they a lot of work.  Kids are messy. 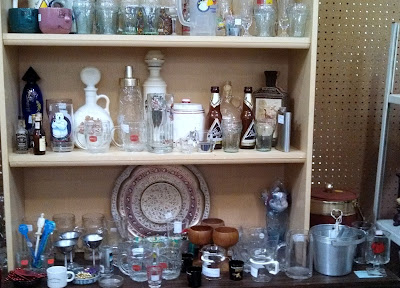 And I have a nice selection of barware.  I must have a regular crew of drinkers and smokers that shop from me, because I sell a lot of this stuff.


I hate this shelf.  It has out lived its usefulness and, frankly, was never that useful to begin with.  I bought it from another vendor in a panic when I was moving in this store, because all of my other shelves were in use in Dixie.  It's too deep and awkward to display stuff, plus it's clunky and ugly and just gets on my nerves!  I need to come up with a plan to get rid of and replace it.  Sigh. 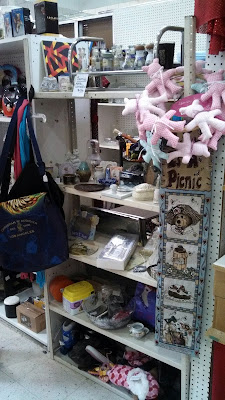 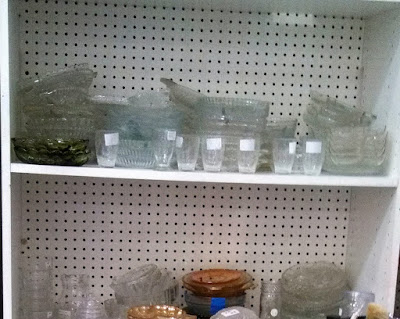 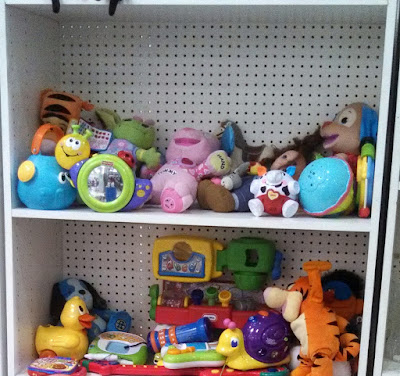 Now we come to the problem in this space.  These shelves.  Well not the shelves, per se, but what's on them.  I need for it to be other stuff, but I have a hard and fast rule that nothing comes home from the booth.  The only things I will pull are either broken or seasonal holiday stuff.  Everything else stays until it sells or rots away.  I just move it from booth to booth and spot to spot until that happens.  I refer to all my bottom shelves as "purgatory" as that's where stuff ends up sitting after I give up on

I know this is bad retail strategy, but I sell enough on a daily basis that my booth is constantly changing, purgatory shelves notwithstanding.  I'm just honestly too lazy to want to schlep stuff home.  Every couple of years, I will pull a bunch of the shelf sitters and either donate them or do a bulk sale to another vendor, but nothing's coming back with me.

Where did all this stuff on these shelves come from?  Remember a while back when I mentioned that I had bought out a vendor who was leaving?  This is part of that stuff.  Some of it is the lower quality end of the lot.  When you buy a whole booth, you get it all, even the warts and turnip rinds.  (Do turnips have rinds?)

I wasn't really intending to buy this woman out.  We were negotiating a deal for her shelves, which I liked because of their size.  I was moving a bunch of shelves to the Endcap Booth, and these would make good replacements.  All of a sudden, she makes this ridiculously low offer for the shelves plus all her stuff.  And the rest is history.

There was a lot of good stuff in her space:  Fenton, Louisville Stoneware, Hadley, ByBee, Boyd's Bears, a couple of Longabergers, plus a ton of Asian decor.  The good stuff went into the Endcap Booth and is selling pretty well for me.  I've made my money back on the deal in just a few weeks.

It's just that there's now a lot of this stuff to deal with. Combs. Bibs. Shoes. Hair accessories. Vegetable peelers.  There's nothing wrong with any of that stuff or with the people who sell it.  It's just not me, and it's taking up space that I want to use for other stuff. 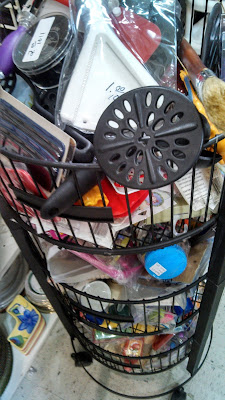 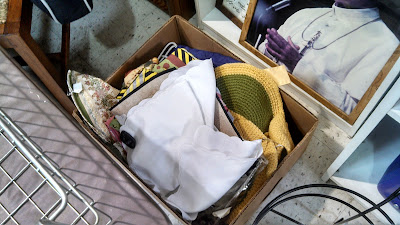 The toys and glass on the white shelves I kind of like, except for the fact that the toys keep falling off the shelves if you look at them sideways.  And there's way too much of the glass.  We're talking like a metric shit ton of glassware.  I'm not kidding. 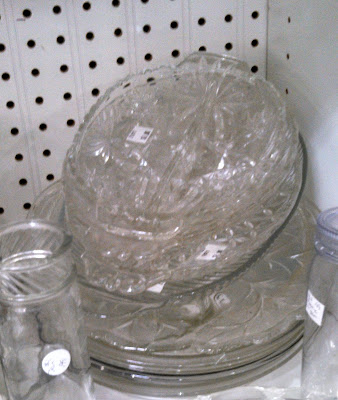 There are DOZENS of these divided relish dishes!  Who serves that much relish, besides maybe the Queen of England.  Oh wait, she doesn't serve relish because it makes her gassy.  Don't ask me how I know this.

It's that way with every glass piece.  Instead of one or two, there are many multiples.  The glass was one of the reasons I got the booth, but I seriously underestimated how much of it there was.  Some of this stuff has got to go.

Since I've made my money back, I'm starting to mark this stuff down.  Way down.  There is enough of it that I'll still make a killer profit on the sheer bulk of the stuff.  Hopefully, that will move this stuff out fast!

Whatever is left at the end of the month will go in my yard sale.  I will be doing a one time only violation of the "no pulling items" rule and yanking any of this that is left and selling it even cheaper.  Anything left after that will be donated.  Hopefully, there will be very little for the yard sale.

The good stuff will stay full price and stay in the Endcap Booth.


I guess that wraps up the whole booth tour thing, and also our first Ask Eddie Anything. I hope you enjoyed it.  Feel free to swing through these parts any time.  I'll be glad to help you fill up a cart.

Your booths do keep you busy!! Wowsers! I love glass but have too much and donated some recently. Oh and I bet the Queen does get gassy...have you seen her face sometimes? Enjoyed the tour and love all the stuff!!!
hugs,
Linda

I shy away from glassware except for pieces needed to display other item. I am a klutz and refuse to sell stuff I would break. I do have a basket I keep free items in - it draws customers who know about it into the back of the booth. I have another question (I know the deadline has passed): How deep is your booth space? I was thinking of a row off low shelves along the front edge facing the aisle might help. The queen gets gas from relish!?!

I think you need to make a very visible SALE sign for that glassware. If people think they're getting a better deal, it'll draw them in and we pray they find another item or two !!! No, turnip's don't have rind's . Lol !! Have a great weekend, TT

Good tour Eddie. Maybe you can (please) repeat the tour when the 'seasonal stuff' gets added. I love booth posts. I agree on that glass, good move it on plan.