Your Chiquito of the Month for July and also Treatment Updates

Survey Says: "We are moving in the right direction!"

That's a direct quote from the doc.  The tumor is responding and has shrunk a bit.  We've still got a ways to go, as the tumor has to (of course) go all the way away and my immune system needs to develop to the point that it will fight off future recurrences on its own.  That's the part that takes so long, which is while I'll still be on this drug for months and months to come.

For the first time in a long time, I feel optimistic, but cautiously so.  There is always the chance the drug could stop working.  The doc says that "rarely happens," but I am nothing if not the exception to a lot of rules already.  There is also the possibility that my immune system won't respond as expected and there will be a recurrence on down the line.  But those are all thoughts for the future.  Right now, the damn thing has shrunk a little.

I'll take it.  And the damn fatigue that goes along with all this.

Also, your Chiquito of the Month for July.  He only takes second billing to treatment updates. 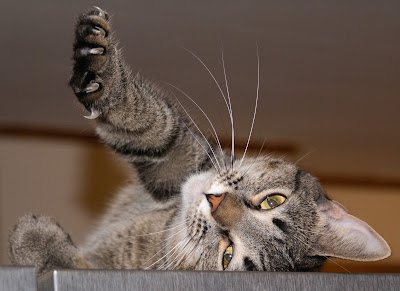 It's obvious he has a new theme song.

This is great news. The Chiquito pic could only be better if you were high fiving him - but I guess it would have been hard to take the picture then!

Yay and more Yay! It's about time some good news on the treatment front. The Chiquito pic is pretty good and the ad made me laugh. When Rosemary Scout was born she came out fist first...yes she did!! We are in for It I would say!
hugs,
Linda

Yay for shrinkage! Well, that kind of shrinkage anyway! ;-)