Moving on Up and Staying Put!

is for everyone who has taken the time to follow this blog, leave a comment, or think a good thought for me during this whole ordeal.  One day, I hope to meet at least some of you face to face and give it to you in person.

I know more than a few of you expressed concern over my rather ambitious booth-moving plans for the week. Trust me, I have been pacing myself throughout.  The only way I know how to go about things is to make "shoot for the moon" plans and then accomplish whatever I can.  If I don't, then I end up sitting around, intimidated by everything that needs to be done and my somewhat limited abilities to get it all done.

I absolutely hate these forced periods of inactivity and rest breaks that I have to take all the time.  It's not that I'm the most ambitious go-getter person alive.  I'm actually pretty lazy.  I just like to choose when I get to be lazy.  You know?

Monday, I got to the Peddlers Mall at about 10:30 and worked until about 7:30 that evening.  I took four half-hour long rest breaks during that time and managed to get done everything that I planned for that day.

Tuesday was treatment, so no Peddlers Mall for me.

Wednesday, I got there at about 1:00.  An earlier arrival was not in the cards that day.  I worked until about 6:30.  I got done what I wanted to get done, so I went on home.  I knew there wasn't going to be any extra work out of me last night.

Today, I stayed in.  I could tell when I tried to get up that it wasn't going to happen, so I didn't force it.  Despite what it may seem, I do listen to my body.  It screams at me quite loudly, in fact.  Today has been one long nap.  Much needed.  I think I have to pretty much go in "day on followed by day off" mode.  At most, I can sometimes do two days "on," but that's about it.

Missing today's put me behind, but assuming that I do make it over tomorrow, and that I get as much done as I want to, then I'll still be 3/4 of the way done, and that's goof enough for the weekend.  Then I can take the weekend off, and finish up on Monday or Tuesday next week, still be in good shape, and have everything where I want it to be.

Despite the chaos, I started of July with a very strong day yesterday.  The chippy pink cabinet that wooed many of you is GONE!  Someone else is loving it now, just the way I like it.  The green chair is still there, largely because no one can get near it.  About half my space is totally inaccessible.

Here is kind of what I am working with.  I don't have pics of everything, but you get the idea. 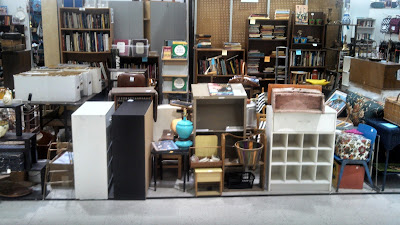 This is what my space looked like after my drop off on Saturday.  Last bit of accessibility gone.  I still managed to sell nearly a hundred bucks worth of stuff that day.  Somehow.  My uncle and I have a joke that some people will crawl into a dumpster over dead rats and broken glass to get at good junk.  An untidy booth doesn't phase 'em.  To that, I say "God bless 'em!"  \

But I do like to keep my space a little better than this.  See all of those shelves in the back?  They've been moved to the new book booth, along with the table of comic boxes on the left, so that's opened up some space to work with.  It's still disheveled, but now it looks like someone is trying to work on it, instead of just storing crap there. 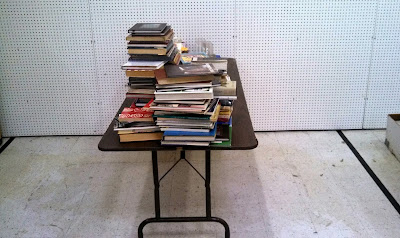 This is the start of the book booth, which is directly across from the other one.  I did not get an after picture, but it has been completely done.  I still have some little things to do, like get a few shelves for toys on the peg wall, but all the other merch is there.

If you can imagine the bookshelves above lining those tape lines, with the books on them and the comics on the table, you pretty much got it.  It's a book booth, you know!

The other thing I've had to deal with was this. 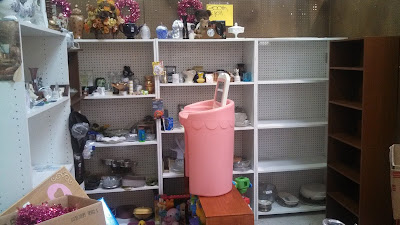 I mentioned that I bought some shelves from a vendor who was leaving.  Well, I also kinda-sorta bought the stuff on the shelves, too.  FROM HERE ON OUT THE MORATORIUM IS TOTAL AND SERIOUS!  I WILL NOT LEAVE THE HOUSE ON SATURDAY!  It was one of those decisions that was kinda dumb and kinda smart.  Dumb because I didn't need the stuff and it's more work to do.  Smart because it was good stuff at a total bargain price and I would be kicking myself if I didn't do it.

It's the sales from this stuff that's keeping me afloat right now.  I had to get all of this out of where it was, because the space had been rented for July, so I just placed it all around the edges of my other space.  It's been selling like crazy.  I think people never knew it was in the previous booth.  Those shelves hold a lot.

The shelves I had to cram into my other set of booths.  I do not have a picture of that, so if you can just imagine higgledy-piggledy, then you have it.

I have a set of shelves I need to move from one undone booth to the other once, then some rearranging in  both spots, and restocking, and I'll be done.  I know it seems like a lot, but I'd rather be out and busy than sitting at home all the time.  I'll sit at home when I have to, but I have to get out when I can.

I'll have pics of the entire new set up when it's done next week.

Eddie you are going things just the way it needs to happen. The work one, rest one stayed with me for 2 years. You have some great spaces and getting the comics, books, toys, rest of the stuff, into their new (or larger) homes is VERY good. I do not know how you got so much done. PROUD of you. You WRITE what is happening so clearly and I thank you for sharing the REAL stuff of health/booths/resting/working/your picture.
Hugs right back to you.
Joy

Okay, maybe I'm on drugs because every time I look at that photo, all I see is you wearing a cowboy hat. Yippee kye yaye aye! Hugs coming at you from AL. Wish I could go to Louisville in Nov with hubby to meet you, but I have to work darn it.

If you are not on drugs in that pic, then you must have slip a whole lot of something in your tea. Hugs back even though you sold the pink cabinet. I am glad you have worked out a schedule allowing your body to rest. I cannot believe how much you accomplished in a short time. HMMM, I may have to rent a small booth and call it the Dumpster Diving Booth! I'll throw a lot of junk into it and let the customers dive in. Oh, wait, my booth is already like that. Today I cleaned some of my rusty treasures from the yard and put them in the outdoor space at the mall. Stay chilly, my friend.

Eddie, I think that you've done a wonderful job under the circumstances. Don't beat yourself up! Wish I lived close to you, your booth is the kind I like to shop in.

Eddie I love you too! I think you are doing great and while its a ton of work you will be so happy with more space. I know you listen to your body. I must say I Laughed Out Loud when you said no more Saturdays or more stuff...right! :) Yes, I do love you. Take care and you will get it done. Oh and I think people see a booth in transition and think they will be the first to get the 'good stuff' and so dive on in!

So glad you're pacing yourself and only working when you feel up to it. It sounds like you were able to get a lot accomplished. Take care buddy! Sending healing thoughts and a hug!