I had to do a quick Mazda unload yesterday, so there was no time for a shot.  I'll make up for it around Tuesday or Wednesday with a finds post, if the weather cooperates.  I'm building up a huge backlog of stuff to show you, but these cloudy, rainy days aren't helping.

Anyway, it seems like I show booth shots when I can't do Mazda shots, so here you go. 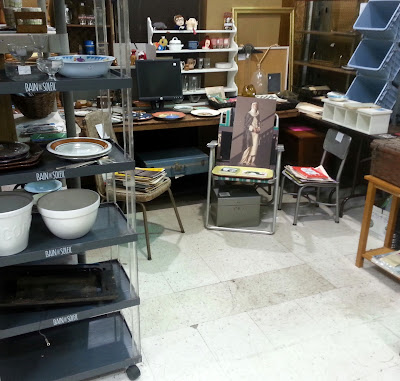 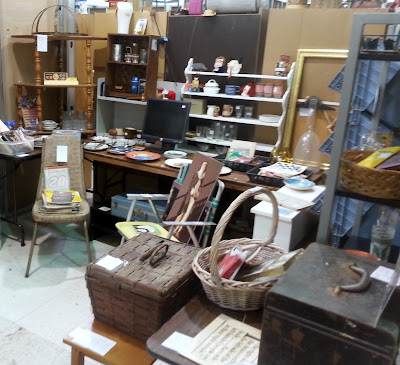 This is the newest space.  It's not nearly done, by any means.  For one thing, people can walk into it easily.  That's not typical for my spaces.  It is, however, presentable.

I'm stocking it slowly right now by pulling things from the other booths that need more attention.  I'll be replacing those things with new stuff, mainly from Sorrow Mountain.  The idea is that the older stuff will attract buyers from being in a different spot, while the new stuff will make the other spaces look fresher, or something like that.

Eventually, I'll be replacing all the tables with shelves from the Mount of Sorrows.  That will create more room for stuff.

You don't quite get the full effect of the booth in these shots, because I'm cropping around the inconvenient pole in the middle of the entrance.  There's not a lot I can do about the pole, since it has a fire extinguisher on it, so altering it is out of the question.  Sigh.

I have a damn extinguisher on the pole at the other booth too.  I live in terror of me (or someone else) knocking one of those suckers off the pole and ruining a ton of my stuff when it explodes all over the place.  Sigh.

Gosh, I do not know where the fire extinguishers are in our mall. It would not matter anyway - i think it is like dry tinder in there. I love the metal tool box on the table. I like the way it is arranged. It does work to move older items around so they look new to customers.

I took some older stuff from my old booth and moved it to my new booth (at another mall) and wouldn't you know it, the stuff just flew out of there. But, I find it works to even just move stuff from one shelf to another or from one side of a booth to another... as long as it highlights the stuff in a new/different way.