I hope you all had a good time checking out the posts from last Friday's group blog.  I know I had more views than I think I have ever had, plus a whole lot of really nice comments.  Thanks to everyone who participated and visited this here blog.

When I originally started working on the post, I was going to make two lists--one as a re-seller and one from a more personal point of view.  I ended up leaving the second list off, because I felt the post was getting rather long.  I didn't want to not use that material, so I decided to do a follow up post and include it.

That's what today is all about.

Before I get into this particular list, I do need to say something important.


I REALLY DID HAVE THIS IDEA LAST WEEK WAY BEFORE I READ SHARA'S POST AND I AM NOT COPYING HER IDEA NO WAY NO HOW!  SO THERE!
NANNY NANNY BOO BOO!

It just so happens that great minds think alike.  That's all.

We'll start with the most boring one first.  I need new (to me) clothes pretty badly.  Most of my old stuff is either shot or seems to have....well.....shrunk....just like that....while hanging in the closet.  I don't want to go buy new stuff or pay new prices, so I am on the hunt this year to stave off impending nakedity.  (And the world is very, very grateful.) 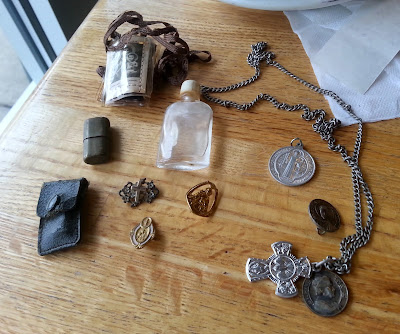 While I'll always be on the look out for all kinds of religious articles for my collection, it seems like I have had a lot of luck recently finding cool religious medals that I don't already have.  I think it's worth keeping my eyes peeled (ouch!) for more. 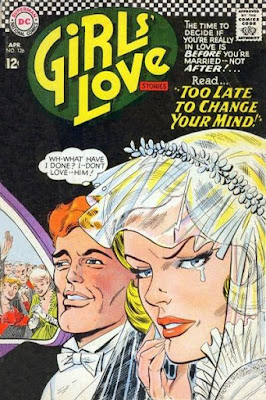 Comic books are something that I always look for (of course), but my interest in these two eras and genres just keeps growing.  These are seriously some of the most wonderful, cheesy classics you can find.  And I want to find more.

Another boring one.  Like Shara (STILL NOT COPYING), I like to get my office supplies, labels, etc. at yard sales.  It's just so much cheaper that way.  This also includes stuff like jars, lids, screws and nails, finials, handles, etc.  And cleaning stuff.  And can openers.  Keith is obsessed with can openers.  Any time we find a Swing A Way can opener, we have to buy it.


Obscure animation. Little known bands.  Strange foreign films.  Cult classics.  Mexican soap operas.  Cheesy old movies.  Fondly-remembered stuff from my childhood.  When Keith goes camping, I like to have my own private oddball film festivals.  I have to hunt to find the stuff I want to watch, but I can usually find a few good ones over the course of the summer.  It's also usually cheap, since there may only be six people in the city who actually want this stuff.

I resisted the urge to do runners-up on my other list, because I knew that once I got started I would find it hard to stop, but this list is different.  So here's a runner-up!

I typically go through at least one puzzle magazine a week or so.  I am always on the look out for more.  I'll take one that's just crosswords, although I prefer a mix of puzzles.  I don't like Sudoku.

And, finally, the top item on my Junker Want List.

I've had want lists as long as I've been a comic collector.  It's part and partial of collecting, this keeping of records of what you've got and what you need to fill holes in your collection.  They've become less important to me in recent years, as I've been down-sizing my collection and focusing my efforts a little more.

As a junker, my list doesn't represent things I would like to own, but instead things I would like to have to sell.  One of the things I like about being a re-seller is that I get to temporarily own cool things, but then pass them on to good homes.  I'm kind of like a temporary guardian of stuff, which I quite like.  I simply don't need more stuff of my own in my life.

So, I keep this little list of things that I would like to be able to provide someone else.  Every year, a few more items get crossed off.  Last year was a really good year for that.  One day, I might do a post about my whole Junker Want List, but for today, I'm settling for my top item.

I've wanted one of these in my booth as long as  I can, but I can never seem to find one at the right price.  Maybe this will be the year.  There's just something about them that is so cool.

Okay, so that's the first addendum.  First addendum?  Yep.  There's another one coming.  Tune in tomorrow, when I set the whole idea of list-making on its head and spin it around until it burps purple jelly beans.
Posted by EM at 5/03/2016 01:10:00 PM

I have a long list of things that I am always looking for for me like vintage birthday candle boxes, pressed pennies, baby spoons and on and on. You gotta find yourself a little treat now and then. I sell more than I keep anymore, so that is a good sign.

I have two old wooden ironing boards in my shed. I would give you one or two if you were close to me. I really, really would! One is super old and it has been repaired with wire - I love it.

I have two wooden ironing boards in my booth - they have sat there for years at $15 each! Also I once bought a box of the Romance comic books. Two weeks ago I put the last few copies in my FREE box - they are gone. I buy most of my clothes at the thrift stores or yard sales. At Old Navy the last Thursday of the month is extreme markdown on sale merchandise. When I taught, honor roll students were invited to stay after school for pajama movie time. The students and teachers donned their pj's, popped popcorn, and watched Plan Nine From Outer Space. Every single nine weeks the same movie. For years. I have several personal collections, but I always look for The Golden Rule rulers.

Hey! I might copycat both of you. I have plenty of lists waiting for their turn.

I enjoyed your lists and then Shara'a and Donna's added lists. I'm a list maker from way back. I'm trying to giveaway more then I buy, but sometimes it doesn't seem to be working. I also buy clothes and purses at the thrift shop. I'm just a frugal gal!
Fun Fun Fun!
hugs,
Linda