Keith already had Mazda pretty much full of camping stuff, so there is no Mazda shot today.  I did get to a church sale and a nerd herd special sale at the comic shop.  I was kind of surprised that they had a sale just a week before Free Comic Book Day, when they'll be having another big sale, but I am so desperate for new comic stock that I dove right in.  It does seem odd to potentially risk running your customer base out of extra cash right before one of the biggest events of the year, but I'm not a comic book retailer, so what do I know?

Wait a minute, I am a sort of comic book retailer!  I guess.  Or something. 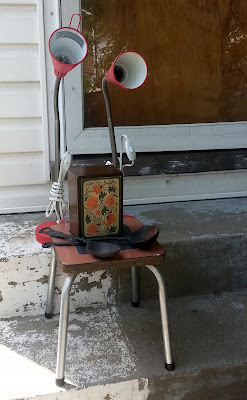 Small haul, but then again, I don't really need anything right now.  There was a lot of furniture at the church sale, but it was too expensive for my tastes. 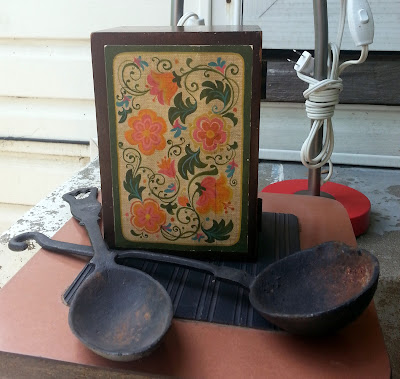 The vintage wood box (containers!!) has a greeting card decoupaged on the front.

These red lamps are Ikea.  Don't they look like aliens? 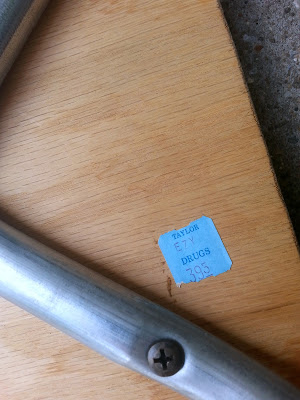 The little stool still has the original price tag on it!

The comic haul was a little larger--several for me, a lot for the booth.  Like I said, I need the stock.  here are some highlights. 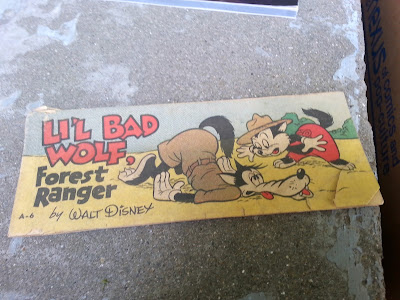 This 1950 Disney giveaway booklet is a keeper. 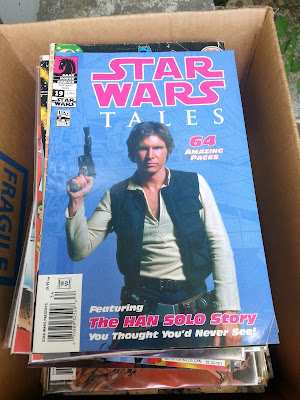 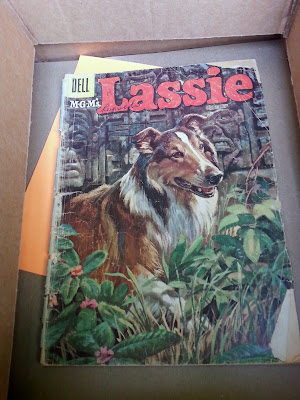 There were about a dozen of these 50's-era Dell comics in my haul.  I'll be keeping about half of them, I think.  The condition is not the greatest for any of them, but they're complete.  That's really all I ask when I can find them for a dollar each. 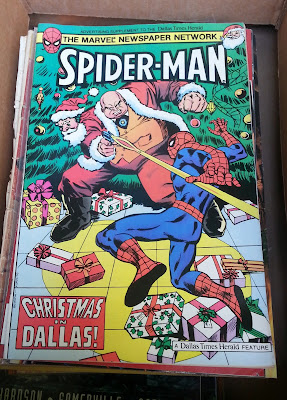 I've been tracking down these Marvel newspaper insert giveaways for years.  Advertising comics and premiums are one type of comic I am most interested in.  This one is full of ads from a now defunct department store. 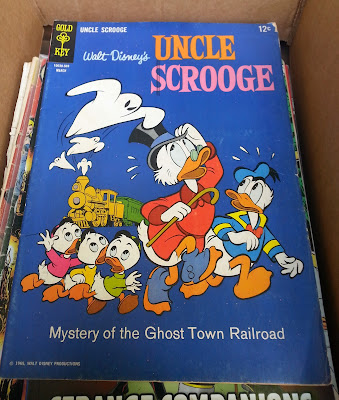 This vintage Disney comic is in really nice shape.  There are always a few surprises like this at the special comic store sales.  Makes it well worth the time to go. 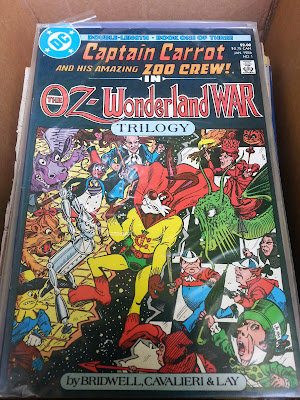 Believe it or not, this is probably my find of the day.  They had all three issues.  I've been hunting this one since it came out, back in my college days.  It was only sold through comic shops, which were still kind of a new thing in those days.  I didn't have regular access to a shop until I graduated and moved to Louisville in the late 80's. 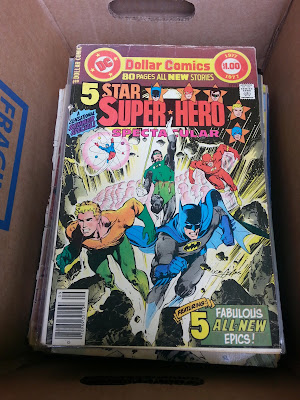 I got several fondly remembered books from my youth, like this one. 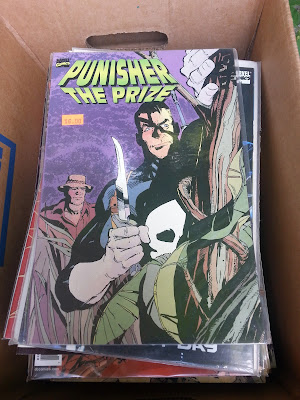 I always pick this particular book up when I find it.  It sells just about as soon as I out it out.

Also, on Friday, I finally finished the great booth re-do and got the aisle booth in order.  Sort of.  If by "in order" you mean "got everything out of tubs and on shelves" and not "made it all pretty."  There's fine-tuning a-plenty to do this week, but since I'll also be setting up the new booth (#7!), some of that will take care of itself.

Before I let you see the pics, you have to take a vision test.  Repeat after me:  "Gee, Eddie.  We don't see anything just thrown on a shelf all willy nilly.  There aren't any piles of things about to cascade off shelves.  It all looks lovely."  If you can get all that out and keep a straight face, then you pass the test and can look at the pics.

So here we go: 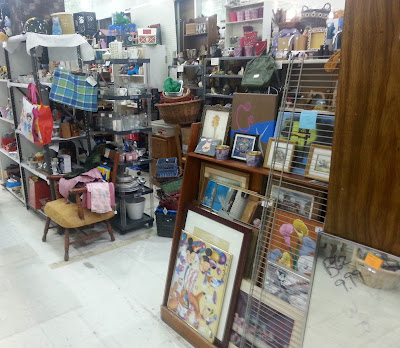 This is the view coming down the aisle.  This is actually three spaces put together and there is this damned inconvenient column right in middle as you come down the aisle.  I cropped that bit out. 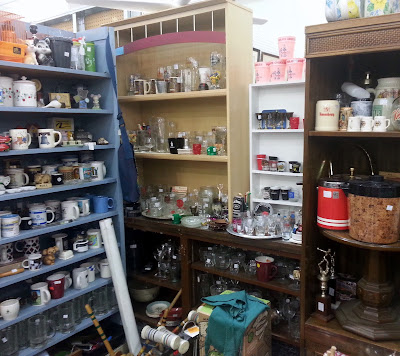 The right side is my ode to drinking, smoking, gambling and other vices.  The left is a shelf of miscellany.  This is the catchall booth, where things that don't fit in the other booths end up.  Although, my vintage/primitive/etc booth is so overly full right now that some of that stuff has made its way down to this one. 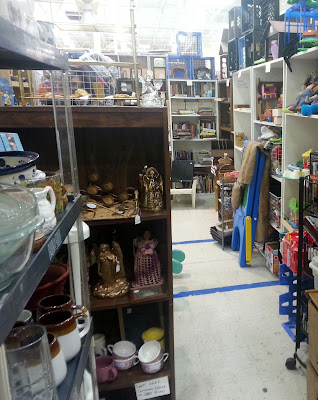 View from the inside across the booth.  The gray shelf in the foreground is going into the new booth, which is going to become a catchall for the catchall.  My booths are getting meta on me.  On the other side of the brown shelf on the left is my table of Happy Meal toys and other small playthings.  It's pretty popular and pretty much stays a mess, even though I try to straighten it out every week.  I sell lots of those suckers.

The best thing about small toys like that is that they are so easy to find in large bags and batches for only a buck or two.  I can either re-bag them into smaller lots or price them individually for a buck or two.  It's pretty easy to pull someone in when they find out they can get a whole bunch of Smurfs for a couple bucks each.  I may not be getting rich with this stuff, but it really shores up the bottom line nicely. 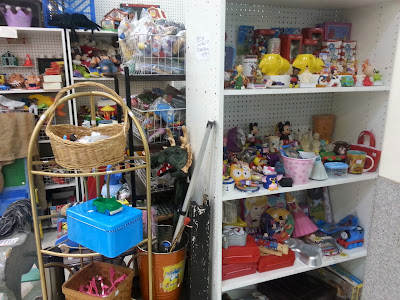 Shelves on the aisle.   You can also see my baskets of bagged toys.  I keep my nicest Disney stuff, plus a few other characters, on this shelf.  It's a little disheveled right now. 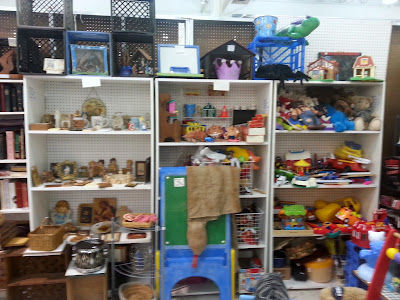 Blurry pic.  Sorry.  Inside toy shelves and the start of my religion section.  You can see how badly piled up the self on the right is.  I desperately need another shelf for toys.  It's odd, but at Dixie I was known for having lots of toys, but here, it's taken me a year to get that stock built back up.

I think I have a plan to move the religious articles on the left and let all three of the white shelves be for toys.  That should ease the crunch for the moment.  Most of those things on the floor are destined either for the new space or for a spot currently occupied by something going to the new space.  I find that I have to do a lot of thinking three moves ahead to keep things working right. 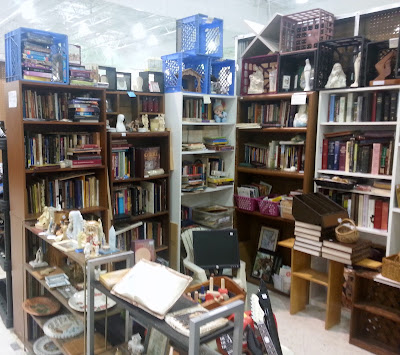 The rest of the religion section and the end of this particular set of spaces.  The two small shelves in the foreground are going to be replaced by a much larger, longer shelf that will enable me to put all the non-book religious items together and make room for more toys as described above.  I'm also relocating my bins of religious booklets to enable me to reduce the piling and stacking on the bookshelves.  This is becoming a popular section for me. 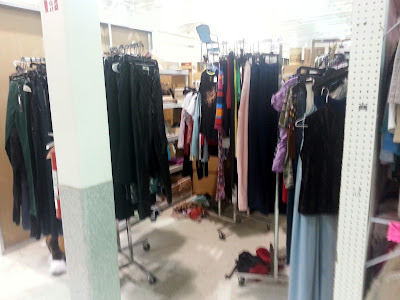 Finally, this is where the new booth is going.  I'll be having to deal with another damn column.  All those clothes are the vacating vendor's.   I was hoping she would have been out already, but she decided to wait until the last minute to move out.  This stuff had better all be gone by the time I get there tomorrow.  I got a lot more shuffling to do.

Thanks for taking this little tour with me.  I hope it didn't offend your aesthetic sensibilities too much.  If so, just grab a cocktail and lay down for a couple of hours.  I promise that the headache and the ghastly after-visions do fade away in time.

I will have to send you some pics from Clayton's booth at the mall. It is chocked full of toys and smalls. Your booths always look inviting to those of us who love to plunder to find the treasures. Tell me what those large iron spoons/ladles are used for. I have a #6 - whatever that means.

Hope your move went swimmingly! I can't wait for my yearly voyage down to your neck of the woods, so I can visit your peddler's mall.

Wow that's a lot of merchandise! I think it looks great, like a fun booth to visit often and discover new treasures each time.