Continuing the Set Out Junk

This will pretty much wrap up the big stuff this time around.  There is one thing at the booth that I need to remember to photograph.  I can't wait to show you the smalls!  There's some awesomeness there you have to see.  I'm still tickled about it, because it's NERDY!

That will have to wait a few days, however.

There were four themes this time around.  One was windows. 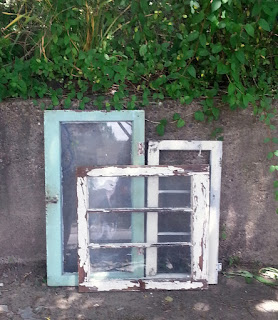 The smallest one has no glass.  Every member of this cute trio has awesome hardware on it.  The one in front has this amazing rusty knob at the bottom. 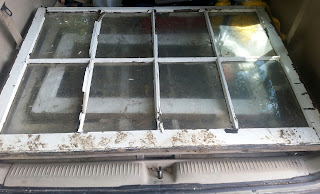 I forgot to get this pic until the window was already in Mazda. Those are eight individual panes of glass.  This was the heaviest of all of them, so of course, it was (say it with me) at the bottom of the hill.

I actually did not find any windows until the very last day of the hunt.  I was getting kind of anxious about it, because I really wanted to find some.  I've been out for a while, and most local purchase options are way too pricey.

Another theme was outdoor side tables. 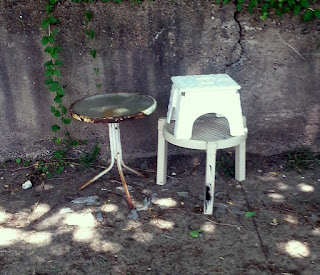 The thing on top is one of those fold up stools, but it's a similar concept.  There's one more, but it needs a really deep cleaning.  These needed some cleaning, but not as much.

Another theme was frames.  There's a rustic-looking one in this shot, plus the one in the last pic, plus a few more to come. 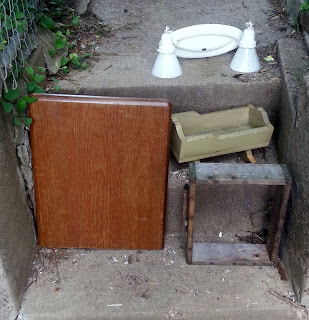 The brown thing is a counter top that would make a nice sign or project.  The wood is really super.  There were several of them in one spot, and, of course, I only took one, then thought it over, went back for more, and they were all gone.

The vintage light fixture has these modern shades etched with western scenes.  They are cute, but totally wrong for the fixture.  I'm removing them to sell separately.  The cute little doll cradle has some issues, but in the right hands is totally saveable. 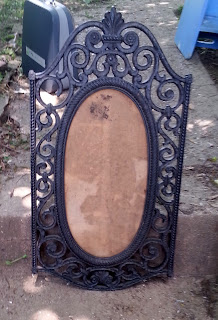 Another frame.  I took that nasty backing out of it.  You can also see a photo-bombing vintage typewriter that was supposed to be in yesterday's pics, but somehow got missed. Oh well.

The fourth theme was chairs.  One was in the first batch of pics, plus the blue stool from yesterday.  There are three more, but I had to throw them on the Hillock due to lack of room at the house.  There's one more at the house, but it'll show up in the next batch.

Now that I think about it, there was a fifth theme: Little Tikes, which is almost always a theme at set out time.  I'll spare you the pics this time, but I found a table, two chairs, and my first-ever ride-in car!  I'm kind of dreading taking that to the booth.

I love how you see the potential in everything you pick up. I'm just wondering if your buyers ever come back to show you what they did with a "project piece" they bought from you. Do you keep an eye out for particular things for certain customers?

I love the free stuff you find. Gosh set out days are pretty awesome where you are.

Okay, so I would pay actual money for all of this stuff. We don't have junk set out here. I wish we did, because I can only imagine the stuff I could find. The windows were my favorite.

Your junk set out looks like the best fun! There's nothing better than free stuff! The Walmart Shareholders meeting is in town and there is big vendor fair up the street. We came home with SIX shopping totes full of free stuff today and there's three more days to go! Drinks, hats, koozies, snacks, cookies, crackers, water bottles, and on and on. We got six trucker caps from one vendor and if you don't think I'm not going to sell most of that junk in the booth for a few bucks you are crazy! Of course I'm selling it all!