March is such an unpredictable month.  Bright, sunshiny fifties one day and dismal damp mid-thirties the next.  Sigh!  We had a lot of rain early last week.  I'm so tired of rain.  I need to get out in my shed and organize the stock I have out there, but it's been just too damn damp.

I nearly sold out my limited stock of furniture last week--two of three pieces are gone.  I'm psyched to see one of them go.  It had been there nearly a year, and I was getting far too comfy using it as a display piece.  Thankfully, most of the items I was keeping on it sold a few days before it did,so not very much was displaced.  Good-bye outdoor bench!

The other wasn't really for sale, at least, not yet.  I bought a small bookshelf a few months ago for 2 bucks at a yard sale intending to use it to hold paperback books.  I was intending to keep it around for a long while, then sell it when I found something better to use.  Since it was kind of nice looking, I put a price tag on it to keep people from dismantling it trying to find a price.  I hate to mark things as not for sale in my booth, unless it's inconsequential (but necessary) thing like metal bookends and doll stands.

Since I didn't want it to sell, I priced it high enough that I thought no one would be willing to pay for it.  And it worked, until last weekend.  My first thought when I saw it sold was "I can't believe anyone would pay that price for that shelf."  My second was:  "Oh shit!  There are books all over the floor at the booth now!"

I'm having a bit of a moral booth dilemma right now, too.  I have a card table that I have designated as my "seasonal" table, so that I can include more timely bits of merch in a more prominent fashion.  For a few weeks now, it's been split in between  St Patrick's Day and Easter.  I'm going to be putting the St Pat's stuff away this week, so the whole table can be dedicated to Easter.  I sold a lot of Easter stuff in recent days, which leaves me some holes to fill and not a lot of stuff to do it with.

Up to now, it's been pretty much baskets and bunnies for my Easter section, but I got to wondering about some of the items I have on my religion wall.  I have, of course, a ton of crucifixes, a couple of Last Supper and Jesus in the Garden pictures, and a whole lot of Easter devotional and Way of the Cross booklets.  Is it appropriate to mix all that in with the bunnies and stuff?  I don't want to commit some kind of religious faux pas.  It seems like it's all right at Christmas to mix Santas and Nativity sets, but Easter has a different vibe to it.  What do you all think?

Sales are all over the freaking place right now and I have no clue what's going on.  The booth report this month will be interesting.

Went to the most disorganized, terrible estate sale this past weekend.  I got a few things, but left other ones, because I just did not want  to deal with the woman running the show.  Too many things were not priced.  Everything was cluttered and all over the place.  Drawers in furniture had not been cleaned out.  She was snapping at customers that they were taking too much of her time.  And she tried to get away with handing a friend of mine a bunch of artist sketch pads to get out of giving me four dollars in change.  It was a nightmare and I most certainly will not attend another of her sales in the future.

I may end up being a little quiet here this week.  The new round of the Part Time Gig starts Monday and most of my hours are evening this time.  That'll take a little bit to get used to.  Plus, I have a lot of new stuff to prepare for the PTG this time around, so that may eat my time up.  I have a lot of bones of posts laying around, but not much complete or near complete content.  Sorry, folks.  Just remember, it's not you.  It's me. 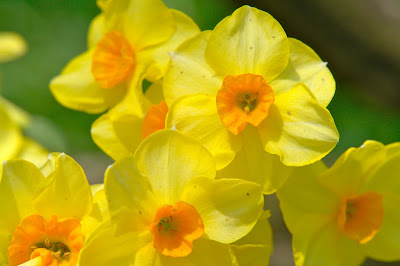 Email ThisBlogThis!Share to TwitterShare to FacebookShare to Pinterest
Labels: life as we live it, Sailor Moon, spring has sprung, the booth, video, yard sales

Lol- Easter can be bunnies ANd crosses.
God does not care.

People? Maybe, but what does it really matter?
:)
thanks for all your thoughts- you are helping me in many ways!!
mj