Since I've not posted in several months of Sundays, that means I haven't shared any fun finds with you all.

I think this guy will make up for it!

I totally love him!  Totally. Love. Him.

I stopped in a favorite junk shop a couple of weeks ago and saw him there.  I couldn't buy him then, because I was on the bus and he just didn't seem like he would handle public transit too well.

I was only browsing at the time, anyway.  I was on the way to my booth from the part time gig.  Keith was going to meet me there with a load of merch in the car.  Due to the locations of my starting point and destination, plus the rush hour traffic, it made more sense for me to bus it out there, start tidying, then unload the car when he arrived.

So, I ended up with a short layover waiting to transfer buses across from this particular shop. Of course, I had to go in.  There really wasn't time to shop, and certainly not time to buy a two foot tall ceramic saint.  But I still had to pop in.

Flash ahead two weeks.  My uncle and I are out junking and we stop by that same shop.  Usually, I'm not lucky enough to have finds that I passed up two weeks prior still be there, but this time the fates and saints and junking gods were all on my side. 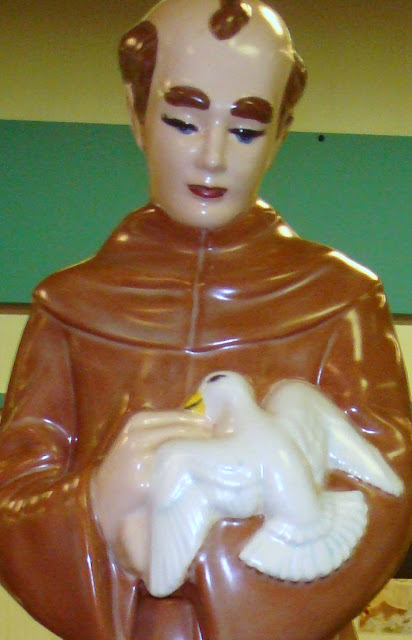 Now, I'm pretty good with my saints, but I'm not totally positive who this guy is.  I'm leaning strongly toward St. Anthony, except that he isn't usually shown with a dove.  He's most often holding the Baby Jesus.  The bird makes me think of Saint Francis, but he's clean-shaven.

The brown robe makes him a Franciscan, but which one?  The dove is a symbol of purity, which would fit with Saint Anthony, so I'm kind of going with him in a less common pose.

Although, I also have another, more unorthodox, idea.  In the early 90's my mom moved to Louisville for a while and we moved in together, so I could save on some expenses.  We had a ground floor apartment with a small concrete patio outside the living room.  She would spread seeds out on the patio for the birds and squirrels, so that her cats could watch them through the glass door.

They used to run to the door whenever she would go out and wait for the birds to come.  One time I joked to her that it was like they were waiting for an apparition or something.  She said that they were waiting for the daily appearance of "St Ann Francis."  We both got a good laugh out of that one and from then on, the daily seeding of the patio was referred to as "the visit from St Ann Francis."

Because, honestly, how else do you explain someone with eyebrows this bushy who wears this much mascara? 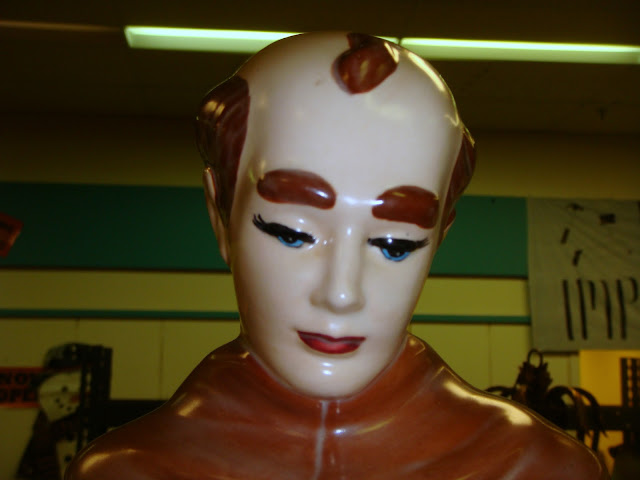 Email ThisBlogThis!Share to TwitterShare to FacebookShare to Pinterest
Labels: catholic stuff, I'm going to hell I just know it, Mom, shopping, the booth

wow - it DOES look like Anne Francis! What country was it made in?