Okay, so I actually said another word that starts with "F." You get the picture. I'm trying to have just a modicum of class here.

It was one of those unexpected kinds of finds that you can really only stumble upon.  If you could plan to encounter stuff like this, we'd all be rolling in treasure and cool finds.

A couple of days before my birthday, I wandered  into one of the local Goodwills and saw this: 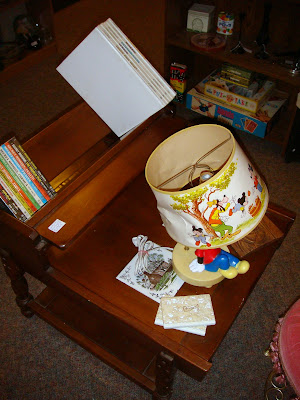 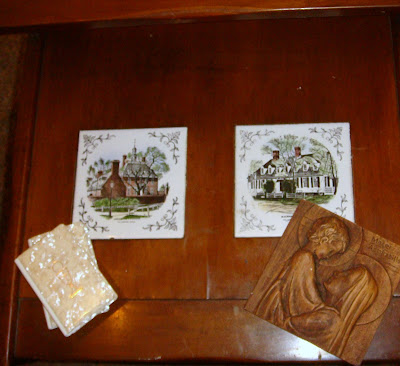 I can't figure out which I love more, the tile inlay or the built in book rack.  It was priced low enough that I knew I could get it and resell it.  They had two other pieces from the same set of furniture, but the tiles were either broken or missing on them.

I wanted, wanted, wanted, wanted it!  However, I was on my bike at the time, so I had no way to get it home.  They only hold furniture for 24 hours there, and I knew I couldn't be back with the truck in that time.  So, I reluctantly bid it farewell, with a silent prayer to the junking gods that it might still be there on my birthday.

Well, that GW was our second stop last Friday, and I discovered that the pieces with the broken tiles were gone, but the end table wasn't!  Oh joy!

Even better, it had friends. 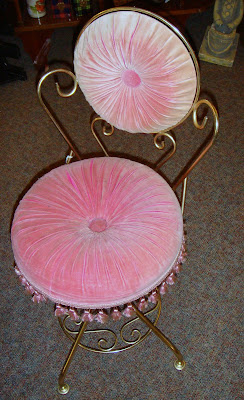 There was also a desk--solid wood with a cracked ice top.  I know.  Who does that?  It looked way cool.  But no pic, because....it's already sold!  For enough to almost pay for everything I got at GW that day!

I got some other small stuff too--a luggage rack, some vintage dishes, some art work.  I filled up the back of my little truck for forty bucks!  I ended up having to go to both booths and put stuff out right away.

Finding one piece of decent furniture at Goodwill is hard enough to do sometimes.  Finding an affordable piece that you can turn a profit on is even harder.  Finding several is unheard of.  The junking gods heard my prayers and they gave me a birthday gift!

Email ThisBlogThis!Share to TwitterShare to FacebookShare to Pinterest
Labels: birthday, shopping, stuff, the booth, the junking gods are smiling one me, thrifting