I didn't get any outside shots at YesterNook the other night, becaue it was dark.   But I wanted to complete the experience, so I popped over there on my way to work on Friday and snapped a few.  I think the outside of the building adds so much to the whole experience.

I may have mentioned before that the building used to be a funeral home.  In fact, my booth is in one of the former funeral chapels.  At some point the family that owned it provided housing for mortuary students and interns on the second floor.  Lots of people from the neighborhood have been coming in and sharing little bits of the history with Patti, the owner.  Some have even given her pictures of the way the area looked back then.  It's kind of cool the response that the place has gotten.

When you see it from outside, it's pretty obvious that is used to be a funeral home.  It really couldn't be anything else, I don't think.  But I also think some of those obvious funeral home features really do lend themselves to its new life as a seconhand place.

Take a look and see what you think.  Do be aware, however, that I make no claim to be a photographer.  It was early, and I was in a hurry.  The sun was in the totally wrong place for a couple of those shots.  I've cleaned them up a bit, but I also make no claim to be a photo editor.  I know how to push the buttons in Picasa, but that's all.  I'm also doing this on my own, not on behalf of the shop, so please don't mistake the quality of my efforts here as a reflection on anything but my abilities or lack thereof.  (Hell, you can even see my bike in one of the shots, because I was too dorky to notice it was there!) 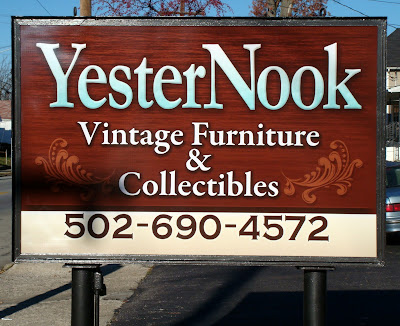 A side view of the building.  Kind of screams "Funeral Home!" doesn't it? 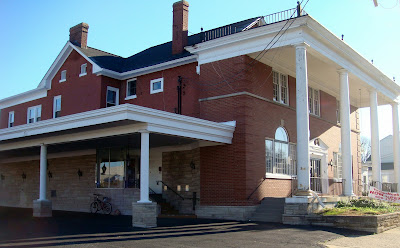 View of the front from across the street.  Can't you just see chairs and chests and things lined up here on the porch, enticing customers in? 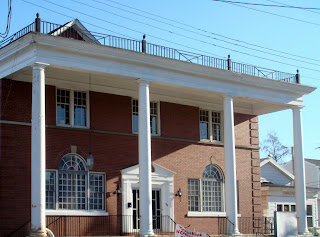 This covering may have provided shelter from elements for mourners at one time, but now it does the same for vendors unloading merchandise.  It goes quite a ways back, too.  Several folks at once can unload their stuff and take it in, remaining happy and dry in the process. 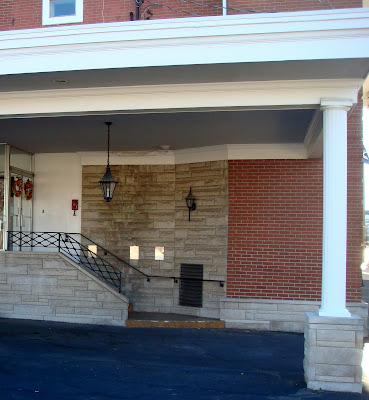 It takes quite a bit of garage space for hearses and such, huh?  Eventually, this will be the YesterNook rough room. 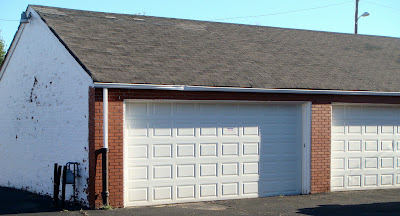 This ramp used to help wheel caskets out to the hearses.  Now it helps wheel furniture in and out of the building.  That door is almost right behind my booth, so it's been a real help for us already! 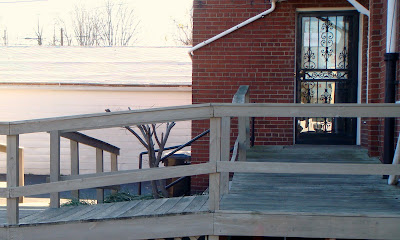 Email ThisBlogThis!Share to TwitterShare to FacebookShare to Pinterest
Labels: junking, the booth, YesterNook

ramps are SO useful when schelepping stuff.